You are here: Home › Army Archives › Army Soldiering On After 140 Years Of Fighting

Army soldiering on after 140 years of 'fighting' for souls 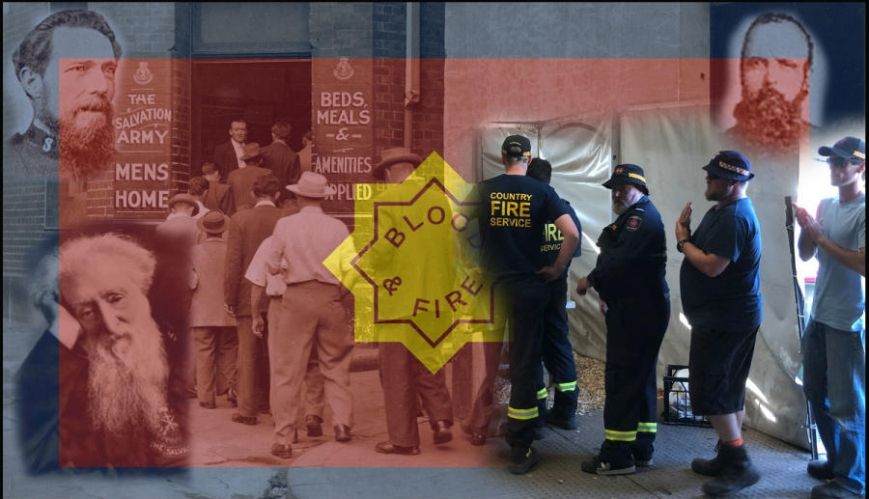 Army soldiering on after 140 years of 'fighting' for souls

Still firing: A montage to mark The Salvation Army’s 140th year in Australia, made up of images (clockwise from top left) of John Gore, Edward Saunders, firies lining up for refreshment during the 2019-20 bushfires, men lining up at the Army’s Foster House, and founder William Booth.

This year will be remembered as one of the most significant the world has yet known because of the coronavirus pandemic.

The Salvation Army has not been immune from its effects and has had to move quickly to respond to ‘a new normal’ as the virus spread rapidly across the globe. Corps, missions and centres around Australia have had to change their ways of operating – from within their various facilities to their work in the community – as social-distancing and social-isolation restrictions were introduced, relaxed and reintroduced.

Not since its humble beginnings from the back of the greengrocer’s cart in Adelaide’s Botanic Park 140 years ago today, has the Army faced such a widespread challenge. The community at large has struggled, but the Army has remained vigilant in trying its best to meet those affected on the front line.

On 5 September 1880, Edward Saunders, a milkman and later railway worker, and John Gore, a builder, conducted an evangelical meeting from the back of that cart under a huge river red gum tree. At the end of the meeting Gore put out an invitation: “If there’s a man here who hasn’t had a square meal today, let him come home to tea with me,” he is reported to have said. 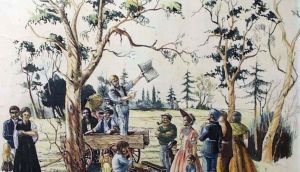 An artist’s impression of the open-air meeting conducted by Edward Saunders and John Gore in the Botanic Park, Adelaide, in 1880.

While this date is commemorated as the ‘beginnings’ of The Salvation Army in Australia, things didn’t get ‘official’ until an officer couple, Thomas and Adelaide Sutherland, were sent by William Booth to Australia in 1881.

According to Lindsay Cox, manager of The Salvation Army Australia Museum, the Sutherlands stepped foot on Australian soil in February 1881 with Booth having commissioned them as ‘Captains of the First Australian Corps in the City of Adelaide.’

“However, any commemoration of the 5th September 1880 is important for it marks an unofficial and unauthorised meeting, which two converts from the Christian Mission, the forerunner of The Salvation Army, may have used the name of The Salvation Army, but importantly led to them writing to William Booth to have an officer sent to Australia,” Lindsay said.

Not a day since has the Army not been prepared to roll up its collective sleeves and strive, “with the love of Jesus”, to meet the needs of contemporary Australians, but more importantly, has continued to be faithful to the Great Commission of Jesus to spread the Gospel to every Australian and to take founder William Booth’s declaration that, wherever there is injustice, to ‘fight’ for souls.

Those two Aussie blokes in Botanic Park were credited with being able to ‘speak the language’ of the contemporary Australian back then and, 140 years on, the Army today seeks to do the same – using modern language, modern technology, modern methods and modern protocols.

The small audience who listened to Gore and Saunders in that park, almost a century and a half ago, has grown to thousands and thousands Down Under – but the needs are ever-increasing.

It has been a season of extremes in 2020, with parts of Queensland and NSW flooded, the ‘Black Summer’ of unusually intense bushfires across the country, particularly in NSW, and continuing drought across most of the eastern states. The Army’s resources were stretched.

Major Brendan Nottle, who with his wife Sandra heads the Army’s Project 614 Corps in Melbourne, said earlier this year that the Army had braced for “a tsunami of need” as the grip of the COVID-19 pandemic tightened following the effects of the natural disasters. Brendan said the Army had experienced a “tripling in demand” for its services as the community struggled through the crises of 2020 – some with bushfires and COVID-19 happening one after the other.

Australia’s territorial leaders, Commissioners Robert and Janine Donaldson, and Chief Secretary Colonel Winsome Merrett said 2020 had plunged the country into unprecedented, challenging and critical times but had been inspired by the way the army of officers, soldiers, employees and volunteers, through its many and varied mission expressions, had responded and adapted in innovative ways to ensure its vision was achieved.

Winsome said that, despite what had happened this year, the Army “more than ever” reaffirmed its commitment to serving Australians so as to “leave no one in need”. She added, “Despite the significant challenges, we are not giving up and we remain committed to meeting the needs both of existing and emerging of those most vulnerable in our communities.”

Robert said the Army’s approach to what had happened during the year was to be at prayer, which saw a 21-day prayer initiative launched on Pentecost Sunday after a national Day of Prayer. Janine said the initiative involved praying for the Army as it interpreted and discerned its way forward, the stewardship of its stretched resources and new ways to deliver its God-given mission.

Since that day in Adelaide’s Botanic Park, the Army not stopped meeting the needs of the struggling in the community, but the pandemic had brought new challenges. The Red Shield Appeal and Self Denial Appeal were forced to go digital, the results of which sent waves of restructuring through the organisation. Corps increased their online and social media presence, reaching out to the socially-distanced and socially-isolated, to name a few. 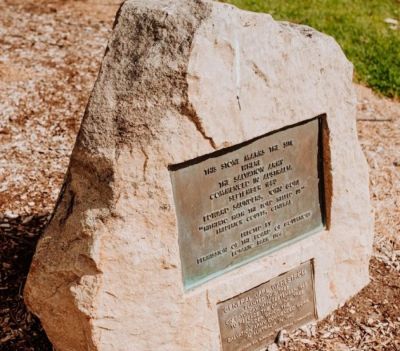 The monument in Botanic Park, Adelaide, commemorating the beginning of The Salvation Army in Australia 140 years ago.

Adelaide Congress Hall is planning to commemorate the anniversary of the ‘unofficial beginning’ on Sunday, 13 September [the corps is celebrating Father's Day this weekend].

Corps Officer Captain Sarah Healey said former officers and soldiers of “the number one corps in the Southern Hemisphere” were invited to write “stories of the past”, which would be presented alongside “stories for the future”. These, she said, would be presented among other commemorative segments during the morning service to “honour the day”.

A monument in Botanic Park, which is maintained by the park’s board of governors, was erected in 1966 to commemorate the moment in time when it all began – under that gum tree. The original tree was removed in the early 1980s after white ants destroyed it, but another was planted in its place in 1985 by then General Jahl Wahlstrom. A plaque to mark that occasion was inserted in the stone monument in the park underneath the original plaque.

Graeme Denholm, President of the Historical Society South Australia Chapter, said much of the timber from the original tree was “rescued” and fashioned several different ways – as desk plaques, souvenirs, monuments, furniture, ornaments and trinkets – which are kept in homes of Salvationists and in Army buildings across the city, maybe even the world.

Despite the challenges over its 140 years in Australia, particularly this year, as the Army marks the milestone, it continues to have soul-winning success because God-inspired officers and soldiers, employees and volunteers continue the fight to claim Jesus for the world.