You are here: Home › Army Archives › Confrontations With The Inspector Of Nuisances

Confrontations with the Inspector of Nuisances Confrontations with the Inspector of Nuisances

The Salvation Army has not always enjoyed the popularity and acceptance that it experiences today, writes Major DAVID WOODBURY, especially when it came to ministering on the streets

During the late 19th century and early 20th century, many local councils employed a person as ‘Inspector of Nuisances’. The role seemed to have had a wide-ranging job description that allowed various inspectors to harass the early Salvation Army.

In Sydney, the archives record that the Inspector of Nuisances was responsible for keeping the city clean, sanitary, and safe. This included inspection and condemnation of food offered for sale in the markets and on the streets, inspection of dangerous buildings, nuisances and hoardings, prosecution of breaches of the by-laws, and keeping thoroughfares free from obstruction. He also supervised the carters who removed rubbish.

In Perth, the Inspector of Nuisances was also responsible for sniffing out bad smells, like those emanating from swamps and marshlands, and, at one point, he was even able to sniff out a dead horse.

In Manly (Sydney), the Inspector of Nuisances was required to capture runaway horses, cattle, pigs, etc. and hold them at the council’s animal pound until reclaimed and a fine paid by the owner.

In the northern NSW city of Grafton, the local Inspector of Nuisances waged a well-publicised campaign against the Army in the early 1890s. In 1891, the corps officer in Grafton, Captain William Thomas Hooker, was fined for obstruction and had appealed the matter to the Supreme Court. He told the court that it was against his principles to pay a fine. But rather than see him go to gaol, the magistrate himself paid the fine the next day. 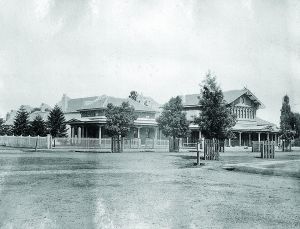 Opened in 1880, shortly after The Salvation Army commenced in Australia, Grafton courthouse was the scene of legal proceedings against the Army by the Inspector of Nuisances.

The Inspector of Nuisances was determined to get the Army off the streets and pursued the matter further with the local council.

The Grafton Clarence and Richmond Examiner of Saturday 18 July 1891 reported on a council discussion on the alleged obstructing of the street by The Salvation Army.

The Inspector of Nuisances, Francois Venator, brought the matter to the meeting as he had already threatened the officers with legal action. During the discussion, aldermen seemed somewhat divided in their opinion as to what could be done. The mayor doubted if there would be any use prosecuting in the Police Court, as the sympathies of the local magistrate were towards the Army.

Other aldermen considered the Army was acting illegally and pointed to local by-laws, which stated, “Any street musician or vocalist who shall not, when requested by any householder within the Borough of Grafton, or his servant, or by any officer or servant of the Council, or by any police officer, depart from the neighbourhood of the premises of such householder, shall be liable to a penalty not exceeding £2, nor less than 5s.”

The threats seemed to have only stimulated the local corps officers, Captain Hooker and Lieutenant John Thomas Tuck, to further indiscretions, ending up with them in court on Tuesday 23 August 1891. Appearing before Mr E.M. Ryan JP, the officers were accused of “loitering in the carriageways in one of the streets of the city, thereby interrupting the traffic thereon”.

After a lengthy legal discussion about whether traffic had been obstructed, the magistrate decided the case was not proven, and since a similar matter was before the Supreme Court, the council was unwise to proceed. The magistrate awarded costs of 21s against the council.

The Army was not without its supporters in Grafton, as a letter to the editor of the Clarence and Richmond Examiner of Saturday 1 August 1891 confirmed.

Although the Army had suffered a great deal of persecution at the hands of the various inspectors of nuisances, by 1895, the tide was turning.

The Sydney Morning Herald of 9 January 1895 reported on court proceedings against the Army by the Inspector of Nuisances in the NSW country town of Bingara.

The inspector, John Plunkett, had brought a case against the Army for obstructing a thoroughfare and had lost the case with heavy costs being awarded against the council. The council had refused to pay the costs, which resulted in the council’s books being seized by police and Plunkett imprisoned for 14 days.