The horror of war fought in the jungles of New Guinea was the unlikely background, says Major DAVID WOODBURY, to one of The Salvation Army’s most cherished brass band compositions

Arthur Gullidge is revered as one of The Salvation Army’s noted composers and arrangers of brass band music.

Born on 9 April 1909 at Broken Hill to Salvationist parents William and Emily Gullidge, he faced hardship early in life when his father was killed in a mine cave-in. His mother, who had previously been a Salvation Army officer, returned to her family home in Tasmania with young Arthur. She was later re-accepted as an active officer.

Arthur shared life in his mother’s appointments in Salvation Army social homes during his formative years, eventually becoming involved in Melbourne City Corps, where the deputy bandmaster, Allen Sharp, gave him a cornet and took time to tutor him. Sharp was later to recall: “Before long, I had to confess to the young man that I had taught him all I knew. I could see that he wanted to delve into the mysteries of harmony and counterpoint to a degree beyond my knowledge. When, a few years later, I entered the Army’s training college, Arthur [at 17 years of age] was appointed to the position I had occupied as deputy bandmaster.”

A short appointment as bandmaster at Collingwood Corps was followed by Gullidge taking up the baton at Brunswick Corps.

His growing interest in brass band music soon saw him composing music for both The Salvation Army and a secular publication, the Regal Brass Band Journal, under the name of W. Arthur Greendale. 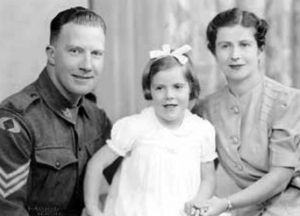 Arthur in his service uniform with his wife Mavis and daughter Judith.

Following the outbreak of World War Two, Gullidge enlisted with a number of his men from the Brunswick Corps band, and together they formed the core of the 2/22nd Battalion Band. Members of the band, as stretcher-bearers, soon faced the reality of war when they arrived with the battalion in Rabaul, New Guinea. It was here, amid the trauma of the battlefield, that Gullidge was to write a piece of music that would forever regard him as one of the Army’s great composers; Divine Communion.

Fellow Salvation Army bandsman, Wilfred Trigg, was to write from New Guinea: “Arthur has written a simple selection around two or three songs that I played one day down at Bonegilla while amusing myself on the accordion – All There is of Me, Sweet Will of God and Holy Spirit Faithful Guide.” Trigg then went on to make what was to become a classic understatement: “It is in the usual Gullidge style but should prove very useful if he sends it for publication.”

‘Divine Communion’ was, indeed, published, although Gullidge was never to see a printed manuscript. It became one of the greatest pieces of music in the history of Salvation Army brass bands. Its sense of intimacy with God permeates the music, perhaps in a way that could only be inspired by the spectre of eternity that hung over Gullidge on the battlefields of New Guinea.

Over the years, many Salvation Army congregations have been drawn intrinsically to the throne of God by the simple yet powerful message of self-surrender, closeness to God and the assurance of eternal guidance.

The composition has recently been re-edited for smaller combinations and recorded afresh by the Army’s International Staff Band.

Gullidge, along with many of his fellow Brunswick bandsmen, was to pay the ultimate sacrifice. 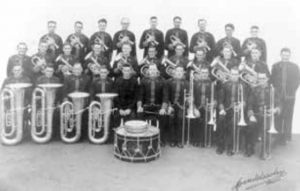 On 23 January 1942, Japanese forces invaded Rabaul, and of the 1400 Australians defending the town, only around 400 made it safely back home. With 15 of his fellow bandsmen, Arthur was taken prisoner by the Japanese and, along with other prisoners of war, was embarked on the Japanese transport ship the Montevideo Maru. On 1 July 1942, the Montevideo Maru was torpedoed off the coast of the Philippines by an American submarine. In what was one of Australia’s greatest maritime disasters, 1053 prisoners lost their lives.

Commissioner Leslie Rusher, a cousin of Gullidge, in his book Tuned to the Celestial Pitch, pays a definitive tribute to the life and creative work of Arthur Gullidge who gave a distinctive “Gullidge sound” to the world of brass banding. “Cut off at its source by the tragedy at sea when Arthur was only 33 years old, the compelling sound has, for over half a century, continued to re-echo around the world, attracting people and drawing them toward the kingdom of God.”

Perhaps it is in the way of God that in the crucible of war and suffering, he wrings from a man’s soul the riches of his spirituality.

In the years since the death of Arthur Gullidge, his music lives on, enriching the spiritual lives of thousands around the world.