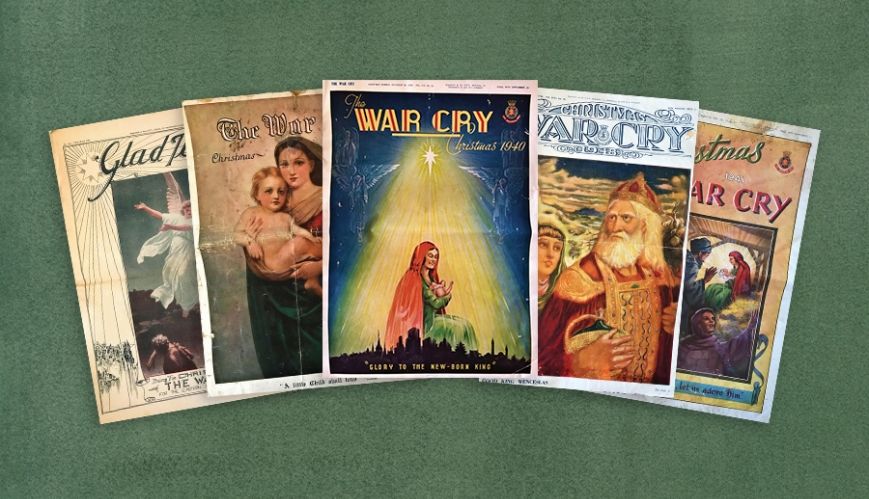 A selection of early Christmas issues of The War Cry, popular with the public for their quality of illustrations, interesting, and advanced use of colour in print.

A review of the Christmas issue of The War Cry stating it was “a very large and creditable illustrated paper” appeared in Melbourne’s Herald in 1889. The War Cry was 16 pages of articles, stories, and illustrations for a penny. Other equivalent newspapers cost three times the amount, without illustrations or colour!

In the early part of the 20th century, Christmas issues of The Salvation Army War Cry, sometimes referred to as the Christmas Cry, were known for their quality of illustrations, interest of stories, and advanced use of colour in print.

Such was the influence of the Christmas Cry that when Frederick Tucker, an Indian civil servant, read a copy of the 1880 London issue, he was determined that the Army should enter India. He later led the movement in India and the USA and married one of Catherine and William Booth’s daughters, Emma.

The Christmas Cry was a popular and important evangelical and social justice outlet for The Salvation Army. Due to its colour and illustrations, the Christmas issue had a much larger readership than the weekly issues. Many people would await their copy with excitement. In 1883, the Christmas Cry saw a run of 68,000 copies, more than three times larger than the Melbourne edition’s weekly circulation (each colony had its own edition at this time).

To gauge the quality of the Christmas Cry, we can look to people in the print industry for comment. In 1894, the professional layout and advanced printing techniques caught the attention of Bowral Free Press (NSW). The paper wrote that the Christmas Cry was “specially written and illustrated and contains a superb lithograph from an original picture”. Other newspapers praised the “extremely interesting” articles, songs, poems and that it was “finely illustrated”.

While the 1902 Christmas Cry received a specific note as “a capital production, with artistic and well-executed covers”, the years from 1911 to 1942 saw highly positive reviews. Newspapers around Australia each year would review the Christmas issue of The War Cry; Perth’s Daily News called it “a well-got-up issue”, the Sydney Sun wrote it “is always good at Christmas time, and always, among Christmas publications, unique.” Newspaper headlines reviewing the Christmas Cry included “An Attractive Christmas Number” (Collie Mail, WA), a “Splendid Production” (Dubbo Dispatch, NSW), and an “Attractive Production” (Port Lincoln Times, SA).

Due to government restrictions on paper during World War Two, the 1943 Christmas Cry was cancelled. The Christmas Cry reappeared in 1944; however, it had lost its edge, so much so that Captain Cox of Crookwell (NSW) was still trying to sell copies in February at a reduced price. The quality had declined, and although there were some improvements noted in the 1949 to 1951 issues, the public had moved on to new forms of print media.

From the mid-1950s, reviews of the Christmas Cry had disappeared from newspapers. Photographs replaced original artwork, and it became smaller in size. The year 1999 saw the final specially published Christmas Cry as Warcry format moved to a magazine-style. With the introduction of Salvos magazine in 2020, The Salvation Army aims to continue the tradition of publishing the season’s message of hope through an Australian Christmas magazine: this message will go into the community with the distribution of around 20,000 copies of the annual Christmas issue of Salvos magazine.