You are here: Home › Army Archives › From Bushcamp To Battlefield

From bushcamp to battlefield 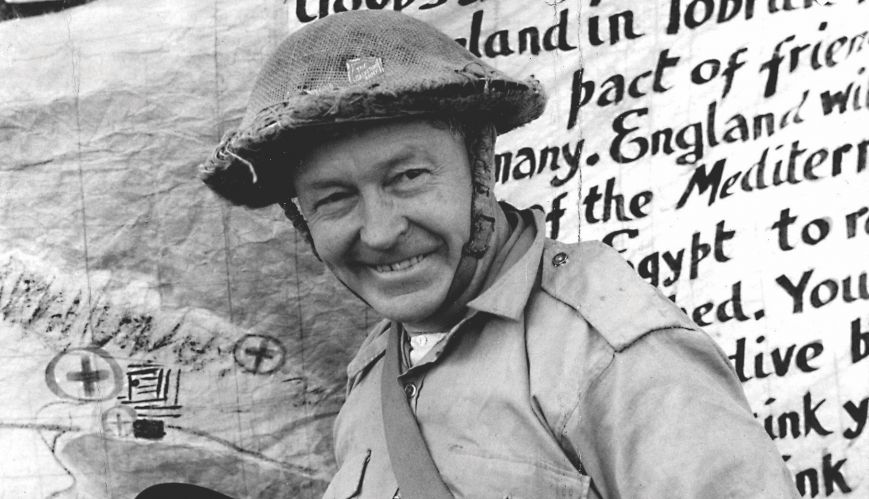 From bushcamp to battlefield

Red Shield Representative Brigadier Arthur McIlveen on duty during his time with the Rats of Tobruk in World War Two.

When Brigadier Sir Arthur William McIlveen arrived at Tobruk during World War Two, writes Major DAVID WOODBURY, he was to etch his name into the annals of history

Perhaps no other name was so well known amongst the Rats of Tobruk as that of Brigadier Sir Arthur William McIlveen. As an unofficial padre to the 2nd/9th Battalion of the AIF, he gained his reputation for selfless service in his ministry to the Australian soldiers, as well as the captured German and Italian troops.

Born on 29 June 1886 at Brodies Plains, near Inverell, NSW, Arthur knew something of the toughness of life when he and his brother had to support the family due to his father’s ill health. Under the influence of his mother, he developed a love of books and poetry, a love that was never to leave him. Having moved to Stannifer, Arthur was influenced to attend The Salvation Army in nearby Tingha, where he made his commitment to Christ on New Year’s Eve 1902.

In 1910, alone in a bush camp in Queensland, Arthur heard God’s call to officership in The Salvation Army, to which he responded. In 1911, along with 131 other cadets, he entered the Officer Training College in Melbourne. His natural ability saw him leave college as dux of his session and be appointed to open a new corps at Thornbury in Victoria. He was a gifted and eloquent speaker, which made him a much sought-after speaker in the latter years of his life.

On 12 January 1916, Arthur married a fellow officer, Elizabeth Mary Mundell, at Camberwell Corps in Melbourne, and the couple was soon appointed to Grenfell Corps in NSW’s Central West. Convinced that he needed to serve his nation, Arthur sought permission from headquarters to serve with the Australian Imperial Force in World War One but was refused. Undaunted, he enlisted on 9 July 1918, but the war ended while he was on a troopship bound for England. 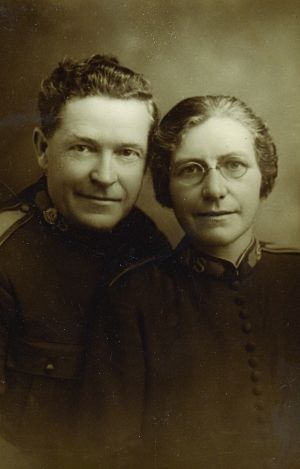 Arthur and Elizabeth McIlveen in their early married life.

Following his discharge, he and Elizabeth were appointed back to the NSW Central West, this time to Dubbo Corps, where they undertook ministering to victims of the pneumonic plague brought back by soldiers from the war.

The Dubbo Liberal and Macquarie Advocate of Thursday 16 February 1939, paid tribute to Arthur’s ministry. An excerpt from a story reads: “All the sufferers from the disease, however, were not treated at the marquees. Flags stuck on the gates of many homes in the town showed that the plague was there. So was Arthur Mcllveen, nursing the sick, giving them medicine, carrying out doctors’ orders, and doing a hundred and one menial tasks in the various houses he visited. He washed and dressed the babies of sick mothers, chopped firewood where the men were stricken, and went about the job fearlessly, imparting cheerfulness wherever he was.”

Because of their selfless ministry, Arthur and Elizabeth were given a tumultuous farewell in 1921 when they left Dubbo. During the following years, they served in various corps appointments as well as divisional work in South Queensland and as the territorial evangelist.

When World War Two broke out, Arthur realised that although he had held a commission as a chaplain in the Citizens’ Military Forces, he was unlikely at 53 years of age to be eligible to go overseas as a military chaplain. However, when an opportunity to go as a Red Shield representative arose, he grasped it and, in May 1940, he sailed with members of the 18th Brigade, AIF, arriving in Egypt in December of that year.

Appointed by Brigadier Leslie Morshead as an unofficial OPD (Other Protestant Denominations) padre to the 2/9th Battalion, Arthur soon found himself bunkered down in the siege of Tobruk. Along with other Red Shield officers, he was to leave an indelible impression through his integrity and usefulness.

In his biography of Arthur McIlveen, Nelson Dunster records Arthur’s words: “Smothered with dust, pestered by fleas and flies, famished with thirst, sometimes tightening belts and at others devouring food permeated with dirt, bombed and shelled, weary and sleep-starved, the garrison grimly and defiantly held on. The Salvation Army had the matchless privilege of ministering to those heroes.”

The Melbourne Argus of Thursday 2 October 1941 reported on Arthur’s ministry to the besieged troops in Tobruk, stating: “Among the Brigadier’s duties has been performing burial rites of more than 150 men, with all of whom he was personally acquainted. He has also written to the next of kin throughout Australia.” And his battalion commander, Brigadier Martin, was to write of Arthur: “He is the padre par excellence; the most blitzed man in Tobruk.”

Carrying a wind-up gramophone with him, Arthur encouraged the troops with recordings that were often damaged in the conflict.

During January 1942, he was recalled by Salvation Army headquarters in Sydney and appointed to oversee the ministry in the courts and among prisoners. He held this position until his retirement on 29 June 1951. Brigadier Sir Arthur McIlveen receives his knighthood for distinguished services from Queen Elizabeth I in 1970.

Following his retirement, he spent many years as a special speaker throughout Australia and was well known for breaking into long stanzas of poetry during an oration. He continued his ministry to service personnel in visiting and caring for many of the returned servicemen, particularly Tobruk veterans.

In 1967, Arthur McIlveen was awarded The Salvation Army’s highest honour, The Order of the Founder, and, in 1970, received a knighthood as a Knight Bachelor of the British Empire for distinguished services to servicemen and ex-servicemen.

Brigadier Sir Arthur William McIlveen was promoted to glory on 1 May 1979 and received a funeral with full military honours. His grave stands today in Woronora Cemetery in the southern Sydney suburb of Sutherland.