You are here: Home › Army Archives › Gripped By The Grace Of God

Gripped by the grace of God Gripped by the grace of God

George Walker as a cadet at The Salvation Army Training College in 1915.

Some men achieve greatness because they seek it. Others, however, display greatness by serving God and their fellow man. In part one of a two-part article, Major DAVID WOODBURY says one such man was George Walker.

Born on 5 December 1892 in the Tasmanian town of Burnie to Salvation Army officer parents, George Walker resolved never to become an officer himself. He had experienced the abject poverty that was the lot of many early officers and wanted none of it.

However, impressed by the commitment of his sister, Alice, to God’s calling to officership in The Salvation Army, George began to reconsider his resolve.

During an Easter tent campaign in Prince Alfred Park in Sydney, he found himself challenged by the words of Mrs Commissioner Hay: “Whatsoever he saith unto you, do it!” The words seemed directed at him personally, and George yielded himself to God’s claim upon his life.

On 10 April 1915, with the world beset by war, George boarded the SS Canberra in Sydney and sailed with other cadets for The Salvation Army Training College in Melbourne. Having seen the example of his sister, who was a lieutenant serving at the Army’s Bethesda Hospital in Melbourne, he determined that “no matter where in the world I am sent, I will be in God’s will”. This resolution was to prove crucial in the difficult years ahead.

George’s first appointment was as corps officer to Barcaldine in Central Queensland. With his cornet, concertina and few other belongings, he stood on the deck of the ship as it departed from Melbourne, put his cornet to his lips and played: “There is grace enough for me; When my need shall greatest be, There’ll be grace enough for me In the treasury of heaven. Hallelujah!”

In the years ahead, he would prove the certainty of these words. Eight brief appointments followed, and during this time, George married Captain Jessie Butler-Nixon, whom he had met when his parents were stationed at Rozelle Corps in Sydney. Jessie had entered the Melbourne training college in 1913.

Life and ministry for George and Jessie Walker became a matter of trust in a God who they believed had called them to serve him unconditionally.

In November 1921, with their three-month-old son Wilbur, they were farewelled for missionary service in China. They sailed in the Nikko Maru with a party of 17 other Salvationists, arriving in China on 24 December to take charge of Salvation Army operations in the Peking West Region.

George found conditions in China difficult, with famine, flood, poor education and overcrowded cities, but soon realised the importance of learning both the Chinese language and culture if he was to bring people into God’s kingdom. He was a man of action, completely abandoned to the work of God, an evangelist who loved souls, went after them and offered a simple, effectual message.

Working with Salvationists from China and other countries, he saw the ministry of The Salvation Army grow. In 1922, he participated in the fourth annual congress in Peking with 90 Chinese officers and cadets present. On 19 June 1922, a second child, Jean, was born. Beggars waiting for a meal at Tai Yuan Fu, where George Walker and his wife were appointed in 1924.

In 1924, George and Jessie were appointed to Tai Yuan Fu in the Shansi Province. George was heavily involved in preaching and running a porridge kitchen providing thousands of meals for the poor.

He also regularly visited and sought to rehabilitate prisoners. On 26 January 1926, a second daughter, Joan, was born. Difficult days followed as tensions between the Chinese and British in Canton and Shanghai escalated into armed conflict.

Following a coded message from headquarters in Peking, George and Jessie were recalled there. Because of the dangerous conditions and pressure from the Chinese Government, all missionary officers were subsequently recalled by The Salvation Army’s International Headquarters, and the Walker family returned to Australia for homeland furlough.

Upon arriving back in Australia, the Walkers were appointed to Wollongong Corps, south of Sydney. However, before they had time to unpack, a phone call informed them that the world leader of the Army, the General, had requested that they proceed to India.

On arriving in Calcutta in January 1928, they were told their appointment would be to Sandipur Criminal Settlement in the Bengal Province. On 5 January 1929, a second son, Howard, was born. Twelve months later, they were sent to Calcutta, where George was training principal and divisional officer responsible for 10 corps.

In December 1929, the Walker family returned to China for a second term. In severe winters, the temperature often dropped below zero, resulting in many Chinese dying from cold and starvation. George’s response was to open night shelters and porridge kitchens where he and his fellow Salvationists served more than 10,000 free meals each week. From these stations, The Salvation Army also provided grain, padded clothing and fuel, as well as food relief at the Peking Beggar’s Camp. In 1934, George was appointed to the port city of Tientsin, 150km south-east of Peking.

Salvation Army meetings in this city of more than 1.5 million people were well attended, and he also conducted a regular English-language broadcast over a local radio station. 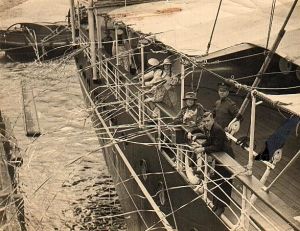 George and his family leaving Sydney for China in 1935.

Salvation Army ministry continued to progress, and by 1933, he had 1000 Salvationists under his command. The Walker family returned to Australia on homeland furlough in July 1935, and George spoke in many corps in NSW and Queensland about his ministry in China.

In April 1936, the family returned to Tientsin for what was to become a trial by fire. As the ship left the wharf in Sydney, George again played the chorus that had become his lifelong conviction: “There is grace enough for me.”