You are here: Home › Army Archives › His 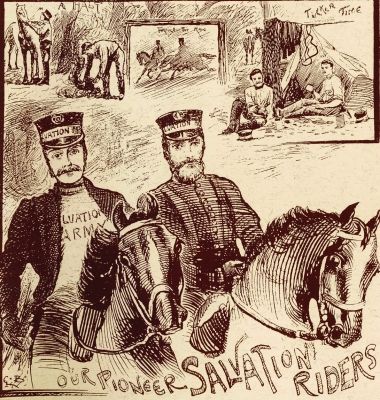 An artist’s depiction of the Army’s first “Salvation Riders” – Captain Edward A. Sincock and Lieutenant George Haycraft – who brought the gospel to people living in remote regions of NSW and Queensland.

Salvation Army history books are overflowing with tales of hardship and heroic acts by its officers. A century ago, being a Salvation Army officer was often “hard yakka”, and despite today’s officers facing different challenges, their missional heart has stood the test of time.

An excerpt from an 1893 War Cry report by two young Salvation Army officers – Captain E. A. Sincock and Lieutenant George Haycraft – seems to read right out of an old-fashioned adventure book. This duo were the hallowed “Salvation Riders”, their commission to go forth on horseback and carry salvation to the back-block settlers and farmers throughout Queensland:

We passed through Landsborough on Thursday evening and camped about three miles out of town until the moon rose and then, saddling up again, pushed towards Caboolture, travelling from 10 o’clock on Thursday night until seven on Friday morning and having to wade through water in several places. I can assure you it was pretty cold. We passed close by Crooked Neck mountain and the Glasshouse. Crooked Neck looked as though it would come over top of us and grind us to powder, but it didn’t ... We had to walk up some of the ridges; it was like creeping up the steeple of a church ...

Not all officers forged new territory, however. There were those who didn’t travel further than their own district, such as the officers of Taree, on the mid-north NSW coast, who filed this report to War Cry in 1891: ... despite the rain and the mud we are still marching on, and have had some good meetings, both at Taree and the outposts. We have also had some lively experiences while out on visits, bareback riding especially gave us cause to remember it, and on another occasion while we were crossing a creek on a log, the captain had the misfortune to make a slip and fall in, and then had to do the meeting at night in his wet clothes!

Then there was The Salvation Army officer in the Blue Mountains, west of Sydney, who inspired the naming of the arduous “Golden Staircase” (which climbs steeply up from the valley floor). It is said that the stairway got its name by way of the officer who would walk down the stairway to hold services for the shale miners in the Jamieson Valley. On the way back, the officer would sing the song, written by Emma Booth, O’ I’m Climbing up the Golden Stairs to Glory. Such was the mettle of those early Salvationists!

So what of today’s Salvation Army officers? Surely life is easier nowadays with modern transport and the 21st century comforts. “Yes, life is easier with 21st comforts, etc,” says Salvation Army Secretary for Personnel, Lieut-Colonel Chris Reid. “But today there are different expectations making officership just as hard. Everybody seems to want everything instantly and many of our officers are telling us that the email and administration responsibilities are drowning them, leaving little time for mission”.

Lieut-Colonel Reid says that part of the Australia Eastern Territory restructure, which took effect in January this year, is to free up officers from the burdens of administration, property management and red-tape so that mission is where energies are focused. Officers today are dealing with many complex people issues, which require high levels of training and skills. “The big difference is that Australia is no longer classed as a Christian country and we are now seeing third and fourth generations of the unchurched,” she says, referring to the challenges officers face in determining what “church”actually looks like in their unique appointments. “Back in the early days, nearly everyone went to church. Now, the ‘cookie-cutter’ approach to church no longer works, especially in our ever-changing multicultural society.”

So while modern technology has removed many of the physical hardships of officership-of-old, it has also brought with it huge mental strain due to its instantaneity and the pressure to “perform” in an entertainment-driven culture where every phone is a camera and every move in ministry can be “shared”, uploaded and critiqued each step of the way.