You are here: Home › Army Archives › Is The Red Shield Appeal Older Than We Think

Is the Red Shield Appeal older than we think? Is the Red Shield Appeal older than we think?

(Above left) An advertisement in the Brisbane Telegraph newspaper in 1939 promoting the Red Shield Appeal. (Above right) In the early 20th century, Salvation Army appeals often sold buttons to raise funds.

The Red Shield Appeal structure embedded in the memory of most Australians came from Canada and arrived on our shores in 1965. However, as is often the case, this story is not all that it appears. The name ‘Red Shield Appeal’ had been used much earlier in Australia and, therefore, may not have been entirely the brainchild of Salvationists in Canada.

In November 1939, a former Australia Eastern Territory leader, Lieutenant-Commissioner W. R. Dalziel, talked on Brisbane radio. His topic was ‘The Salvation Army Red Shield Appeal’. This discussion appeared to be the commencement of The Salvation Army’s fundraising efforts with troops during World War Two.

The name ‘Red Shield Appeal’ appeared in newspapers from 1939 to 1947. The name again appeared as an appeal from 1952 to 1955 to finance The Salvation Army’s work during the Korean conflict and later general work with troops.

The 1965 rendition of the Red Shield Appeal differed in a few areas. The collection moved from the streets of major populations to doorknocking at every door. It transformed from a state and locally run appeal to a nationwide event. 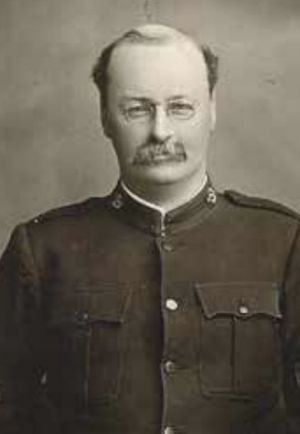 Salvation Army appeals from 1914 often sold buttons, badges, tags or pins to raise funds; this was not usual for the later Red Shield Appeal. In addition to these, finances from the new appeal structure went to general social work funds of the Army and not just the work of The Salvation Army (War Work) Defence Services. This last point is the major difference between the appeal in the 1940s/50s and the new structure of the 1960s. If this last point is used to define the name ‘Red Shield Appeal’ in Australia, then there is another contender for the first use of this title.

In September 1931, The Herald, a Melbourne newspaper, titled an Army ‘Appreciation Day’ as the ‘Red Shield Appeal’. The appeal in the 1930s aimed to sell 50,000 badges in the shape of the Army’s red shield to “enable the Army to meet the heavy demands upon its organisation to feed the hungry and clothe the poor”.

The appeal was organised by the famed Salvation Army officer and songwriter, Colonel Arthur S. Arnott, son of the founder of Arnott’s biscuits. The Red Shield Appeal was not the ‘official’ name of the appeal; however, it is of interest that the newspaper used such a name over 30 years before the structured appeal with which we all became familiar.

The Red Shield Appeal in 1931 not only showed the name could be used and recognised but also that The Salvation Army could run an appeal that did not separate its belief from its practice.

The badges, or buttons as they were called, that were sold had written on them, ‘Appreciation Day. God Bless You!’ and on another, ‘Peace and Goodwill’. This information shows that the name ‘Red Shield Appeal’ has a long history. As in the past, we pray that God will bless the giver.

GARTH R. HENTZSCHEL IS A SALVATIONIST LIVING IN BRISBANE (QLD), A FREELANCE HISTORIAN, AND THE EXECUTIVE EDITOR OF THE AUSTRALASIAN JOURNAL OF SALVATION ARMY HISTORY.