You are here: Home › Army Archives › The 1978 International Congress Read All About It

The 1978 International Congress ... read all about it! The 1978 International Congress ... read all about it!

Newspapers across the UK reported on the 1978 International Congress of The Salvation Army.

The year 1978 was pivotal in the history of The Salvation Army. A century prior, our brass bands had taken to the streets, and General William Booth had changed the name from The Christian Mission. With General Arnold Brown at the helm as international commander, the Army came together for its fifth international congress – and it would take place on the very streets The Salvation Army had started on. A special souvenir edition of The WarCry was released in the UK to coincide with the 1978 International Congress on 1 July 1978.

It is well documented that Salvationists from across the globe travelled to London for the congress – newspapers state that of the 50,000 delegates who participated, 30,000 came from abroad. This included some Australian Salvationists, including the Melbourne Staff Band and the Sydney Salvation Songsters.

But how did the rest of the world view the centenary of the Salvation Army? A collection of newspaper reports from the 10-day event show that this congress was more than a flash in the pan to the public. Receiving multiple front pages in the Evening Standard, a full-page spread in Christian World, and naturally, a WarCry souvenir issue and an All The World issue dedicated to the event.

Perhaps what stands out the most from coverage of the 1978 congress is not that it was covered – some 30,000 tourists depositing $3 million into London’s economy is nothing to sniff at – but the way secular outlet the Evening Standard clung to the event as a bid for the Army’s survival.

Indeed, the Evening Standard of 3 July 1978 prefaced a headline of SALVATION IN THE STREETS, with the words, ‘General launches the Army’s Fight to Survive’, before writer Alister Martin expanded by saying, “The 3,000,000 soldiers of The Salvation Army must take their battle back to the streets to survive in the modern world.”

Days later, a small column appears detailing how the congress is benefiting the tourism industry in London. Then, on 7 July, a cover page featuring a photo of General and Mrs Arnold with a crowd of Salvationists sits ablaze under the banner head, with the words, HALLELUJAH TO CONGRESS: ‘Ten days of The Salvation Army’s greatest meeting of the decade.’

A deeper look at the lead story in Christian World, titled, ‘The Church Militant,’ suggests that perhaps the public didn’t have a problem with the sheer numbers or missional output of the Army, but they couldn’t make sense of its tradition.

It resonates with the modern-day Salvation Army’s mission to be the practical hands and feet of Christ while holding to the tradition of our heritage. Something Christian World was able to point out that in an issue from 29 July 1978, stated the Army is “astonishingly well known through the world as ‘a group of good people doing good work’.”

It goes on to say, “To some, the movement is an almost incomprehensible amalgam of strangely assorted aspects. To others, it is a mixture of brass bands and disaster relief. It is twirling tambourines and world-girdling chain of general and maternal hospitals. It is a street-corner service and a network of homes and hostels for the homeless, the aged, the unmarried mother, the unwanted child, the alcoholic, the drug addict, and the ex-prisoner. It is evangelism and the world’s most effective missing person’s bureau.” Granted, this paragraph was written by Colonel William Pratt, then Chief Secretary of the USA West Territory, but the heart behind the Army remains the same. 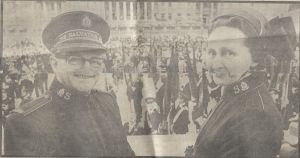 General Arnold and Mrs Jean Brown were pictured on the front page of the Evening Standard on 7 July 1978, pictured at Trafalgar Square with thousands of Salvationists attending the International Congress (Image digitally altered).

It shows that while times had changed in the century since General Booth led the Army, the Spirit-filled mission of the movement had not. The many congress events – including meetings at Wembley Complex and The Royal Albert Hall – also included a special guest, his Royal Highness, the Prince of Wales. In addition to a Pageant of Nations, a theatre production, and a sporting competition, was a revelation to the public that The Salvation Army was still very much alive a century after its creation.

As General and Mrs Arnold Brown stated in their opening letter, “from lands far and near will come delegates to give living proof of the universality of Christ’s saving grace. We gather with one dominating desire – that God will ‘bless our Army’ and ‘baptise with power’ to all who are privileged to share in this unique and unforgettable assembly.”

Whether the Army was on the front page of a newspaper, filled a stadium, or turned a heart towards Christ, the goal of the 1978 International Congress was ultimately to bring God’s kingdom to earth.

“If towards the congress there has flowed such an expectation and faith as I am led to believe, then surely, from the congress, there will be a flood out to the Army’s most distant points of work and witness a sweeping tide of renewal and rededication,” General and Mrs Arnold Brown finished.

And as delegates would suggest, this is exactly what happened.

Read more about the Australian Salvationists who attended the 1978 International Congress next week, including one the General invited to share the stage during a service.