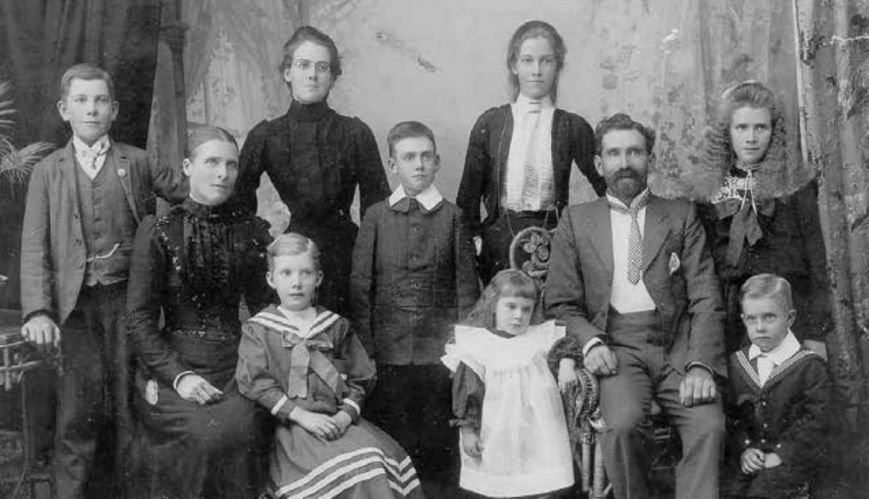 The Sutherland family in Western Australia, where they eventually settled.

Thomas and Adelaide Sutherland’s officership only lasted a handful of years, but, says Major DAVID WOODBURY, their legacy has had a significant impact on the development of The Salvation Army.

Appointed as the first Salvation Army officers to Australia, Adelaide and Thomas Sutherland epitomised the very essence of early Salvationism. Adelaide, a fiery speaker who was not averse to bouncing roughs who interrupted her preaching, and Thomas, saved from a life of drunkenness and lawlessness, proved an effective choice for Australia’s first officers.

Both Adelaide and Thomas were born in England; Thomas in 1857 in Norfolk, and Adelaide (Milner) three years later in Lincolnshire. They became officers in William Booth’s fledgling Salvation Army and with nicknames part and parcel of its early culture, Thomas became known as ‘Glory Thomas’ and Adelaide as ‘Hot Milner’. They met in an officers’ meeting conducted by William Booth, with Thomas, on noticing Adelaide, whispering to his friend, Isaac Unsworth, “That girl is going to be my wife.”

After the briefest of courtships, the Sutherlands were appointed to Derby on 3 August 1880, where their stay was almost as brief as their courtship. Within a few months, they were appointed to work in the Colonies of Australasia and on 5 January 1881, General and Mrs William Booth conducted a farewell meeting for the young couple. The following day, they boarded the SS Aconcagua for their voyage to Australia, arriving in Adelaide on 17 February 1881.

There was no mistaking the Sutherlands as they stepped off the boat in Adelaide wearing the first Salvation Army uniforms seen in Australia. Thomas was impressive in a red tunic, blue trousers, spiked white helmet with a brass chin strap and a large metal shield emblazoned with the words, ‘Salvation Army’.

In his book Pioneers on Parade, Leslie Rusher commented that Thomas stood out like a colour-crested cockatoo in a field of sparrows. Adelaide wore a dark blue dress that reached her ankles and a small bonnet. Both wore a row of white braid around their collars, signifying their rank as captains. 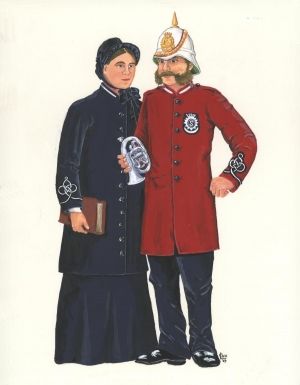 An artist’s impression of Captains Adelaide and Thomas Sutherland on disembarking in Adelaide on 17 February 1881. Illustration: Lindsay Cox

The first meeting was held in a stable belonging to Salvationist Edward Saunders, who, along with John Gore, had commenced the ministry of The Salvation Army in Adelaide on 5 September 1880. Within a short space of time, the little band of Salvationists had acquired their own hall in an infamous part of Adelaide.

There were 23 uniformed soldiers among the 68 on the roll. Having brought his cornet with him from England, Thomas commenced the first Salvation Army band in Australia, which soon attracted complaints about its open-air meetings. Being warned by the police to cease such actions, Thomas soon found himself in court when he refused the police order. Ordered to pay a shilling fine, Thomas was imprisoned until the rising of the court.

Back on the street the following week, Thomas found himself once again taken to court where he argued that other bands and even the circus are allowed to march, so why not the Army? Swayed by the rational argument, the court agreed that the Army could continue singing in the streets of Adelaide.

Further pioneering work was in hand for the Sutherlands when, in August of 1882, Captain and Mrs Emmanual Rolfe arrived from England to replace them. This allowed the Sutherlands to depart for Sydney to commence The Salvation Army in Australia’s first city. Arriving on 24 November 1882, Thomas and Adelaide set about establishing the Army’s ministry, opening fire in Paddy’s Markets at Haymarket on Saturday 2 December 1882.

Lieutenant Alex Canty, who had been converted in Adelaide, had preceded the Sutherlands to Sydney, deploying posters in the street declaring that the Army was “invading Sydney; with heavy field guns and light artillery, with sharpshooters bringing up the rear”. The open-air meeting in Paddy’s Markets must have been a raucous affair since Thomas was unable to preach the following day due to problems with his throat, an ailment that was to plague him in the years ahead.

Three years of exhausting ministry in Adelaide, Sydney and, later, Brisbane took their toll on Thomas Sutherland, and at 27 years of age, he was forced to relinquish his officership due to ongoing problems with his throat. In May 1884, the Sutherlands and their baby daughter, Annie Dorothea, boarded the SS Liguria to return to their native England.

Not a lot is known about the family’s short stay back in England, but we do know that within 18 months, they had returned to Australia, settling in an isolated area near Yelbini, Western Australia, where they raised nine children. Later, the family moved to Bunbury, soldiering at the corps until 1919, when Thomas’s failing health prompted a move to Perth to receive better medical attention.

Thomas Sutherland was promoted to glory on 1 August 1919, aged 62. He is buried in The Salvation Army section of Karrakatta Cemetery in Claremont, Western Australia. Adelaide spent her remaining years visiting at the Hillcrest Maternity Training Hospital in Fremantle, where her daughter, Captain Annie Sutherland, was matron.

On 11 September 1926, Adelaide was promoted to glory and laid to rest beside her husband. Although the Sutherlands’ star burnt out early, it shone brightly, and their place in the history of The Salvation Army in Australia is significant.