You are here: Home › Army Archives › War Heroes On The Home Front

War heroes on the home front 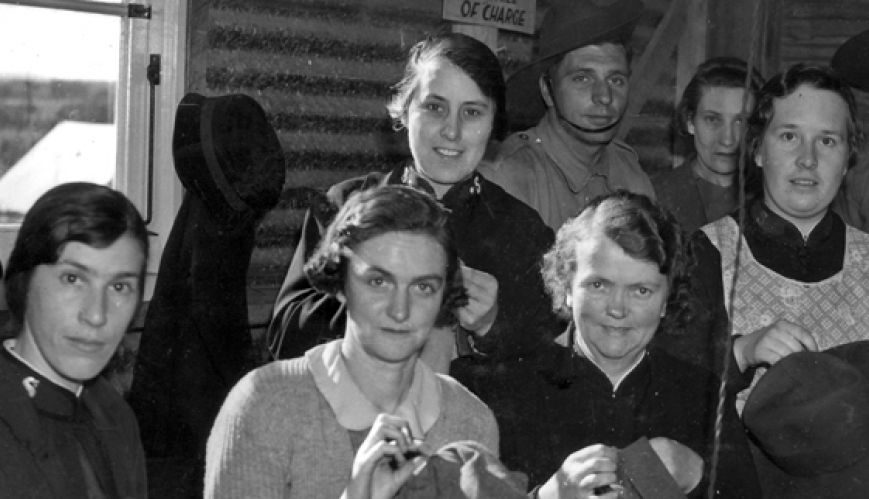 War heroes on the home front

Volunteer Salvation Army women in the main hall of the Melbourne City Temple on 25 November, 1944, packing goods to send to the troops overseas.

Barely a few days had passed after the declaration of World War Two on Sunday, 3 September 1939, before The Salvation Army opened its first Red Shield marquee. Within weeks, dozens more had been erected across Australia, with The Salvation Army soon present at nearly every location troops could be found in the country.

Even when troops were on the move, The Salvation Army would be in place to greet them. In Cowra, south-west NSW, Salvation Army soldiers met each trainload of Defence Force personnel at the station, offering hot coffee and rolls. A total of 3100 men were served. At midnight every night, Cowra Salvationists supplied hot soup through the winter months to men on guard. Service like this was replicated in cities and towns across the nation.

The war years brought extra responsibilities to everyone, not least Salvation Army corps officers who were often given the additional role of supporting troops at the nearest Defence Force base or training camp, as well as ministering to their local corps. In Cairns, despite the threat of imminent attack in 1943, the local corps officers stayed put, continuing to serve the community by conducting spiritual meetings in both the Cairns Salvation Army hall and at the aerodrome with the men at the garrison.

Local corps officers relied on the tireless support of their congregation to attend to the needs and comforts of the troops on home soil. The Salvation Army’s Australian editorin-chief recorded that, “When his excellency, the Governor-General, Lord Cowrie, VC, inspected the Bathurst military camp, he visited the Red Shield tent: ... Requests were numerous and varied. One man desired his boots to be half-soled and heeled. Would the Army arrange? They were sent to town and returned the next day. Another soldier heard that his brother was reported to have been drowned off the Spanish coast. Would the Army help to verify? Yes! He was told the Army traces thousands of such cases in all parts of the world.”

Each of these requests, although taken by the officer heading up the Red Shield tent or marquee, was usually actioned by his loyal congregation who went above and beyond to assist with the war effort. Another example was the 30 home league members from Wollongong Corps who regularly travelled over an hour to the Ingleburn military camp, south-west of Sydney, to mend clothes. And not only were Salvationists supporting the troops at home who were either in training, on furlough or about to depart, many corps members across the country were also busy making and compiling comfort packs for troops overseas, and collecting supplies to distribute to allied civilians in war-torn locations. It was recorded that, “Within one month, midway through 1940, 6000 garments were sent from Sydney to London for distribution among refugees and air-raid victims”.

The establishment of the Red Shield huts in military bases on the home front in World War Two paved the way for the ongoing work of The Salvation Army within the Australian Defence Force, that continues today. And while the names of famous Salvation Army padres such as William McKenzie and Arthur McIlveen are well known, the thousands of Salvationists and officers who toiled at the front line of support on the home front are largely unknown, yet no less valuable.