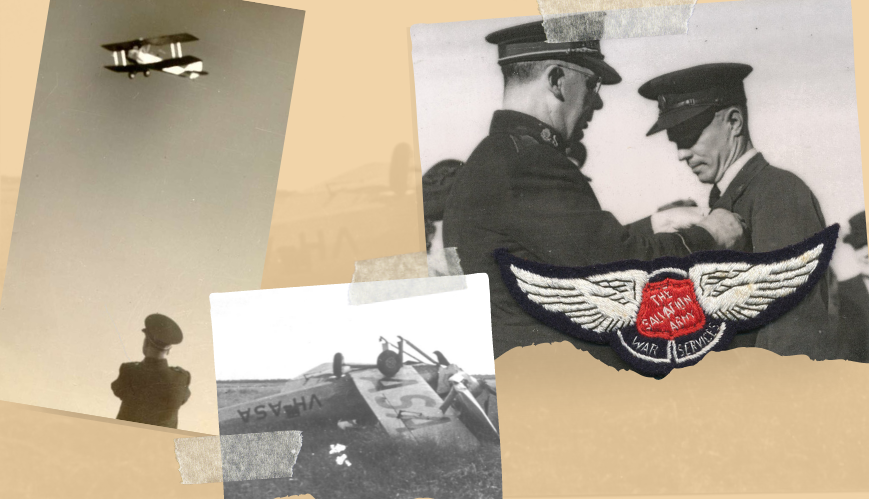 The Salvation Army’s flying padres flew into service in 1945 under the guidance of the first padre, Brigadier Vic Pedersen – but it wasn’t without a few challenges along the way.

Last week, we heard the story of The Salvation Army Flying Padre’s wartime origins when Brigadier Vic Pedersen acquired an ex-RAAF Tiger Moth to travel to remote communities in northern Australia. With the war over, Vic completed his first flight in October 1945, taking services to Wyndham, Broome, and Derby. The story continues ... 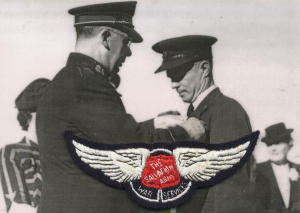 Brigadier Vic Pedersen (then Captain, right) receives his special Flying Red Shield badge from Commissioner William Dalziel at the dedication of the VH-ASA in September 1945.

Word about the aircraft had gotten around, and for his second flight, Vic was asked to fly a Mrs Heggie and her five-year-old son Bruce to the Kunmunya Mission, 480km from Broome. However, they were forced into an emergency landing across a tidal swamp due to smoke haze. It was the dry season, and with temperatures above 30 degrees Celsius, the situation was life-threatening. But God was still there.

“The aircraft landed normally, but our situation was desperate. It was 10am on Sunday 21 October 1945, and [coming into] the hottest time of year. We had precisely two pints of water, which were quickly used,” Vic recalls in his records. “We asked God to help us, and he did. No other help came until the following Thursday when we were located by aircraft and supplies were dropped.”

So how did God help the unlikely trio in one of the world’s harshest environments? By providing them with water. And it was five-year-old Bruce who saw it first. 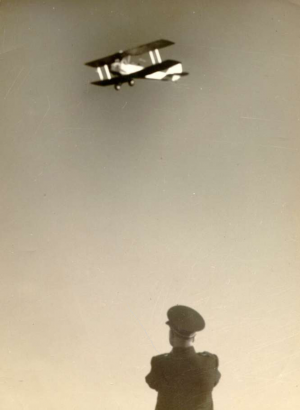 Commissioner William Dalziel watches Brigadier Vic Pedersen take flight in the VH-ASA after it was dedicated at Essendon Airport in 1945. Not long after, the plane would crash-land in the Kimberley region of WA.

“Our tidal flat was surrounded by hills of rocks and loose stones. I climbed one and soon realised that my strenuous action was foolish,” said Vic. “We rested in the shade of the aircraft. Dozing off in the early afternoon, I heard Bruce call out that there was water racing towards us!”

Miraculously, cool water swirled straight past the grounded aircraft and its stranded passengers. Submerging the wheels of the VH-ASA, they sat under the toe wing and dug a hole so they could retain water. And it had come just in time. Describing their thirst as “torture”, flies had been swarming around them, getting stuck in their mouths. They now had enough water to cool off and rehydrate before the tide went out. But not knowing how long they would be stranded, Vic needed to find a way to purify and retain the water.

“I tried to remove the auxiliary tank with a view of distilling water. Getting it out would be a long job. We needed fresh water desperately and urgently,” Vic said. “The thought came, ‘Why not boil water in my service water bottle.’ I filled it from our waterhole and set a fire underneath it.”

Connecting the speaking tubes from his flying helmet and wrapping his handkerchief around the Y end to fit the water bottleneck, the other ends were placed in an empty bully beef tin. Vic’s ingenuity worked. They soon had water spurting into the tin, and they drank it while it was still too hot to tell whether it was salt or fresh. Their saturated clothes also became a source of hydration, and placing items on the tubes, the steam became distilled water for their consumption. In addition, God kept providing for them when the tide covered the flat again.

“We had a lot to thank God for,” Vic shares. “Using the water bottle, I’m sure, was divinely inspired. It not only gave us all the water we needed but also provided excellent occupational therapy. It also gave a sense of achievement that boosted morale. When the sun rose, bringing another day of extreme heat and flies, we could relax in water-cooled comfort and count our blessings.”

(Top) The VH-ASA crash-landed near Mount Trafalgar in WA in October 1945. (Bottom) While much of the plane was recovered and repaired, some parts were left behind. Pictured here, wreckage from the crash lies in the outback in 2015.

The first sign of human help came on day three when Bruce heard an aircraft. By Thursday, they had all seen a plane overhead, and it dropped a canvas bag of supplies for the trio on the mudflat. Finally, on Friday – five days after their emergency landing, they were rescued by a mission lugger [small sailing ship]. They left the VH-ASA behind, intending to recover it to continue the Flying Padre Service’s work. But before reaching Kunmunya Mission, they had an extra stop. The mission luggar was asked to pick up the stranded crew of a Dutch Mitchell aircraft on the coast, something which Vic was able to help with. And after dropping the Heggies at Kunmunya – albeit five days late, they went to Truscott and then Darwin.

Making his way back to the coast, Vic rallied and got a ride on a RAAF ship 06-16 that was pulling out radar stations along the coast. With Red Shield Assistant Frank Bounds accompanying him, they located the grounded VH-ASA, which they realised was at the foot of Mount Trafalgar in the Kimberley region.

Along with the crew of the RAAF ship, they crafted sleds and dismantled the plane, placing it on the boat. The engine was damaged by salt water, but this, along with whatever was salvageable, was loaded onto the 06-16, which unloaded at Darwin Wharf that December. Not before a trip back to Truscott though, where Vic and Frank dutifully handed out Christmas parcels to the remaining servicemen!

Appointed to 12 Squadron in Darwin, Vic was able to store the VH-ASA in a retired RAAF hanger and do the repairs himself. Amidst ensuring the servicemen were able to get home for Christmas, he rebuilt the engine with the assistance of engineers over the coming months.