A smoker’s pipe in the likeness of William Booth (who was not a smoker), produced in the late 1890s in a series commemorating important contemporary dignitaries.

One of the most enigmatic World War Two images from the Kokoda campaign depicts a wounded Australian soldier having his cigarette lit by Red Shield Representative Major Albert Moore. 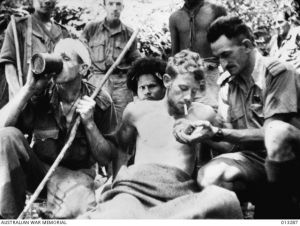 For better and worse, cigarettes were part of life for many fighting men. US General John Pershing was asked during World War One what was “needed to win the war”, and he replied, “tobacco as much as bullets.”

Groups such as The Salvation Army, the YMCA and the Red Cross raised money to send and distribute “tobacco products, reading materials and other items” (such as coffee, tea, and playing cards) overseas in several countries. For Salvation Army personnel serving people in historical conflicts, the aim was to serve and comfort, not to chide soldiers by railing against tobacco and nicotine’s addictive, harmful properties.

It’s worth noting, however, that the Army has long made a public stand against smoking for much of its history.

General William Booth, in 1888, decried tobacco “in any form, whether that of smoking, snuff-taking, or chewing”. He wrote that “eminent medical men say that smoking injures the brain and consequently the entire nervous system [and] the lungs, the stomach, the digestive organs generally and often injures the eyes”. 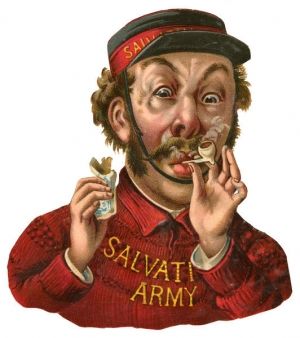 A Salvationist depicted enjoying a smoke from his pipe in the late 1890s. Image courtesy of Mary Evans Picture Library.

The General also described smoking as “a shameful waste of money”, an “unnatural habit”, and an “unclean practice [that] corrupts the breath, poisons the atmosphere and makes its votary a nuisance in a small way to everybody about him”.

That liberating tale was typical of Salvationists’ attitudes. In an 1898 edition of the War Cry, no less an Aussie luminary than Adjutant John Gore had testified that he’d been saved “in London 30 years ago, on 3 September 1868, from drink, tobacco and all sin”. It was typical of accounts of “victories over tobacco”.

A local officer had testified about “complete deliverance from tobacco” in the 15 August 1903 issue of The Victory. That same year, the War Cry informed readers and advocated for a legislative bill “prohibiting the sale of tobacco to boys under 16 years” and ran a series of articles about the concerning links between tobacco and health.

The 21 October 1905 War Cry relates that “a man who was so wedded to his pipe that he thought a divorce impossible suddenly resolved to give it up and worship God with clean lips. He did, and the money, which hitherto went up in smoke, was saved and expended in purchasing a corps flag, and the man himself carries it”.

A 1916 feature article, ‘The Tobacco Evil’, by Lieut-Colonel Graham, preceded much editorialising against smoking in the 1920s. By the 1930s and 1940s, corps such as Lidcombe (Sydney) and Woonona (in Wollongong) were reporting stories about “tobacco destroyed” and “tobacco surrendered” at the mercy seat. 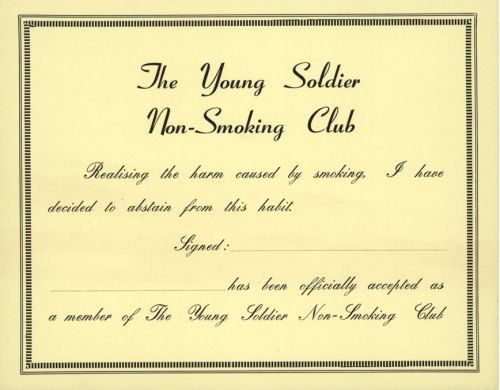 Certificate of Membership of the ‘Non-Smoking Club’ in 1955.

By the 1950s, the War Cry was clearly describing tobacco as “a killer”, and The Salvation Army’s Junior Soldiers program even rolled out a ‘Certificate of Membership’ to ‘The Young Soldier Non-Smoking Club’ and invited the young people to sign it as a commitment.

In 1976, the late Colonel Henry Gariepy wrote that as well as asking Salvationists to abstain from intoxicating liquors and other drugs, The Salvation Army added tobacco to the prescribed list of substances for Salvationists.

The Salvation Army believes that ‘not using them’ is the only way to ensure people won’t be hurt by alcohol, tobacco and other drugs. Nevertheless, Salvos do not condemn people who use these substances.

Salvationists and Salvation Army staff continue to work compassionately with those whose use of such substances has become harmful, supporting them to regain social, physical, mental, and spiritual health through a health-focused, harm-reduction approach in addiction treatment services.