You are here: Home › Features › 50 Years Behind The Microphone

50 years behind the microphone 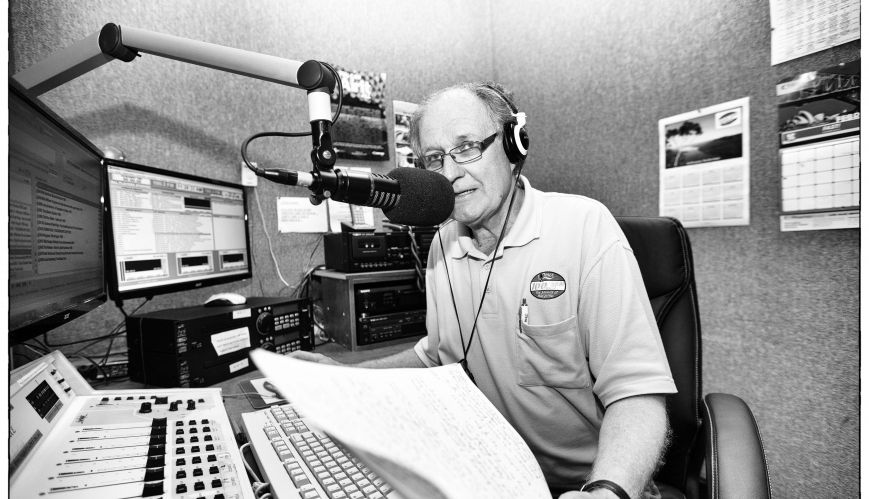 50 years behind the microphone

A lonely woman sat in her bedroom on the brink of ending her life. It had lost its meaning. There was no purpose, she thought, of going any further. She had prepared a lethal cocktail of tablets and alcohol. They were beside her bed, waiting to take her on the trip of no return. As part of her preparation, the woman switched on her radio, searching for music to accompany her departure. The radio was her companion; the one true friend when all others seemed to have flown. Instead of music, somebody was speaking on the radio as she switched on.

It was Major Chris Witts, of The Salvation Army. It was a pre-recorded message. Major Witts was offering hope when the woman thought there was none. That night, she changed her mind. The woman and Major Witts spoke to each other by telephone a week later. She was able to go on with her life. “It was a startling reminder,” says Major Witts, “of how God works.”

In radio, there is a tested theory that one example represents countless others. Major Witts will never know how many lives his radio broadcasts have changed. But going into his 50th year of on-air presentation, the number is probably staggering. It isn’t a thought that would have even entered his mind when he first found radio as an eight-year-old boy living on wa farm at Ando, in the NSW Snowy Mountains.

That was almost 58 years ago. There was something magical, he says, about listening to his first transistor radio in bed at night. “I was captivated by the radio announcer’s voice and presentation. And I loved the music of the late 1950s. I wanted to join the ranks of the disc jockeys, as they were called back then.”

Five years later, aged 12, he left Ando for Sydney to continue his education as a boarder at the prestigious St Ignatius Catholic College at Riverview. Radio legend John Laws became his “best friend”. Often lonely and homesick, the young Chris Witts used his radio for companionship. John Laws was at the beginning of his illustrious radio career and through his on-air work, inspired a young student.

After completing secondary school at 16, Chris boarded with his grandparents at Mosman. He worked for Plaza Hoyts theatres, delivering films. But he really wanted to be another John Laws and disc-jockeys like him. He saw the dream on the precipice of reality when 2GB in 1966 announced a radio announcers’ course. He enrolled, was accepted and couldn’t wait for every Wednesday night to have his turn at the practice mike and turntable (records in those days!). He was the youngest in class. Returning to Ando in 1967, he immediately set about sending audition tapes to country radio stations. Working on the family farm was not an option for a young man with radio on his radar. Cooma station 2XL made contact. He could start as a junior announcer. Just prior to his 17th birthday, he started work on “The Voice of the Snowy Mountains”, as 2XL promoted itself. “I was broadcasting literally from the rooftop of Australia,” he says.

At 17, he was “an on-air personality”, choosing songs to play, reading the news and funeral announcements, selling advertising, recording commercials and trying to understand the technical operations. It was a small station where everybody did everything! Even the community got involved. One of those who came into his life through the radio station in 1968 was Lieutenant John Townsend, the young Salvation Army corps officer at Cooma. Lieut Townsend occasionally called at the station to present a weekly Faith for Today program. Like Chris, John was a radio tragic. They clicked. Lieut Townsend invited Chris to a Salvation Army Sunday morning church service. “I arrived one Sunday at the tiny Salvo hall,” says Chris, “to be warmly welcomed by 12 worshippers.

They were genuine people and took a personal interest in me. Some even knew me from the radio. In June 1968, John Townsend led me to accept Jesus as my Lord.” Chris was enrolled as a senior soldier of The Salvation Army on 1 June 1969. He did the unthinkable and resigned from his radio career to become a Candidate Helper in preparation for training as a Salvation Army officer. He spent 1970 and 1971 at the Army’s training college in Sydney. It’s unwise to ignore talent, and Cadet Chris Witts, while in training college, was given opportunity to use his announcing skills to record 15-minute devotionals for Sydney station 2CH. He loved it.

He married Laurel in 1973. Their first Salvation Army appointment together was to Katoomba. Of course, he called at the local radio station, 2KA, and it wasn’t long before he was presenting his own show on Sunday nights, with a mix of Christian and mainstream material. It was also his responsibility to shut down the station transmitter when he left at midnight. There were other radio station opportunities at further corps appointments. In 1985, he was appointed to The Salvation Army Editorial Department in Sydney, allowing him the privilege of again presenting 2CH programs on behalf of the Army. Ten years later, while he and Laurel were serving as corps officers at Campsie, he was invited to succeed the Reverend Vernon Turner as manager of Australia’s first Christian radio station, 2CBA FM. Then-Salvation Army Territorial Commander Commissioner John Gowans agreed to the appointment, which lasted four years.

He returned to a Salvation Army position in 2000 in the Communications Department, with responsibility for establishing a radio unit to produce programs for community stations around the country. “Radio and The Salvation Army are a good match,” he says, “because there are so many good news stories (in The Salvation Army) of how people meet Jesus in our various ministries. They are stories worth sharing.”

Sunday Afternoon Easy Listening includes occasional Christian messages. Sentimental Journey is music from the 1940s and 1950s, and often takes him back to his first radio days at 2XL Cooma. Like he said, he is a radio tragic. “I still think that radio is the most exciting medium engaging the heart and mind of people,” he says. “Radio isn’t called ‘Theatre of the Mind’ for nothing. Many surveys reveal that radio has greater impact than either video or print. Radio touches a person’s soul and paints a picture.

“Because radio is such a personal medium – friend talking to friend – I always visualise talking to one person (when on-air). The most successful radio presenters today still see themselves speaking to one person. That’s the key to a good broadcaster, in my opinion.

“For almost 50 years now, I have experienced the power of radio as a contributor. Why do I do it? When Eric Liddell ran at the 1924 Olympic Games in Paris, he said: ‘I believe that God made me for a purpose. When I run I feel (God’s) pleasure’. I’m certainly no athlete, but I do sense God’s pleasure in a small studio preparing to open the microphone to speak to a friend I have probably never met.”