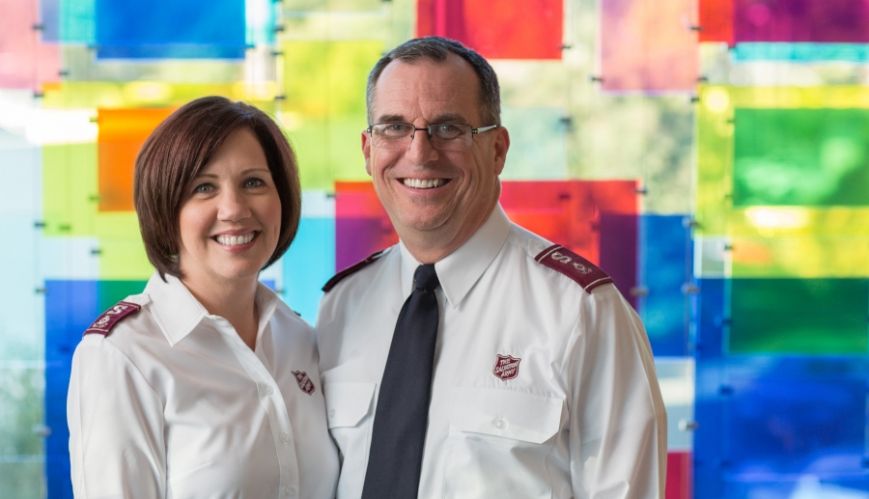 Departing Australia Territory leaders Commissioners Floyd and Tracey Tidd have written a farewell letter after six years of ministry in this country, which included leading The Salvation Army through the Australia One Program.

Watch highlights from the Tidds' Farewell Salute and Reception and then read their farewell letter below:

As Tracey and I have come to the end of our appointment here in Australia, we look back with hearts filled with gratitude. We have had opportunity together with you to see the ‘new thing’ God is doing, as we claimed his promise from Isaiah 43:19 at the commencement of the Australia One journey. Allow us to share some of our reflections with you.

Some of these reflections were shared in the video interview with Tracey and myself, which is on the Others website (watch HERE), where we also answered some questions regarding the Australia One Program. A condensed version of that interview is also available in the June edition of Others magazine (Read HERE).

It has been a privilege and an honour to serve as territorial leaders for the past six years, and we will reflect on the joy of the experience for many years to come. We have been significantly shaped by the experience here in Australia and, although we faced some challenges, there has been great enthusiasm and excitement when we’ve seen things happening here that furthered God’s Kingdom. Our hearts have been lifted and broadened in our own faith and expectation.

Over the past three years, we have gone through an immense journey with the Australia One Program and six months ago, we officially celebrated becoming the new Australia Territory. This is a journey that has been bathed in prayer, including two 100 Days of Unceasing Prayer campaigns as well as a 100 Days of Shared Scripture campaign. Our eyes and hearts, as a movement, have continued to look to God who raised up The Salvation Army to seek and follow his continued leading.

That journey started with the acknowledgement that as the society we serve continues to evolve and change around us, our transformation to become a united national movement – with a shared national vision, mission, values and strategy – places us in the best possible position to continue to do what we do best within and for the Australian community, so that we can realise our vision to transform one life at a time with the love of Jesus.

The journey has centred on the ‘six whys’ – greater impact, increased innovation, aligned vision, united voice, stronger partnership and better stewardship. Greater impact is achieved at the front line, and that is why we redirected $5 million from this year’s Red Shield Appeal, and an additional $2 million for new front-line innovation – both firsts as a national movement – to local mission.

Operating as the Australia Territory

I’m often asked if Australia One is working. My answer is yes, and not yet. It is working, but all the benefits have not yet been realised. The Australia Territory is on a three to five-year journey of continued change. Courage is needed to continue on this journey of change to make the movement the most effective it can be to deliver mission that is desperately needed in Australia.

Much has been achieved, though, over the past three years, including the development of our national vision, mission, values and strategy, the establishment of our new governance model, the implementation of our new integrated Local Mission Delivery model, and the setting of a gender equity agenda.

To further the work to effectively serve as the Australia Territory, a strategic framework and structure is in place for the Army’s impact to be even greater, to sustain and ensure our relevance as a Christian movement in Australia into the future.

I am so grateful that what has been accomplished in Australia has been the result of an aligned leadership team across two, then one territory, a solid team of officers, soldiers, employees and volunteers, and unwavering support from International Headquarters.

Learning from the past

To ensure that learnings are considered and embedded into the next chapter of the journey, we undertook a post-implementation review (PIR) of the Australia One Program.

As mentioned earlier, with the transition to an Australia Territory complete, a journey of transformation has commenced and there is still work ahead to fully realise the benefits. I acknowledge that these may be challenging times for some, but I truly believe that now there is a single Australia Territory, the best days are still ahead. Based on what has already been achieved, I have full confidence that the team of Salvos in Australia, continuing to follow God’s lead, can achieve even greater things.

Thank you to everyone who completed the final Pulse Survey. Tracey and I read every one of the 4000 comments. This survey, as well as the recommendations from the PIR, will inform the next steps to be taken. Allow me to offer some initial thoughts in response.

The financial investment necessary to deliver an Australia Territory was raised in the Pulse Survey comments. As stewards of the movement’s financial resources, it is a responsibility that we have taken very seriously. Operating two independent territories resulted in duplication of costs and efforts, so there are substantial financial benefits in moving to a single territory. Based on commitments made by management to the Board, the investment in the program will be covered by these benefits within the next 24 months.

The incoming territorial leaders, Commissioners Janine and Robert Donaldson, will work with Colonels Julie and Mark Campbell to ensure that these benefits are set aside for mission through the establishment and management of a Mission Endowment Fund to support the ongoing mission sustainability of the movement. The Donaldsons will work with the Campbells on how the Mission Endowment Fund balances the need to build up contingency reserves, while releasing mission funding to the front line.

Some comments centred on concerns that The Salvation Army was becoming ‘corporatised’. The mission of the Army in Australia remains unchanged. The Salvation Army is a Christian movement, dedicated to sharing the love of Jesus. To achieve that mission, the Australia Territory has 9000 employees, 30,000 volunteers, 1000 officers and manages $1 billion in operations annually. It has a responsibility to the people who support the mission and the people it serves, to operate with good business practices and governance. This is not opposed to being a strong spiritual evangelical movement but, in fact, supports it.

There is more work ahead to embed the Australia Territory. Commissioners Janine and Robert Donaldson will lead this next chapter. Having known them for the past three years and recently spending 10 days in orientation together in Australia, we are convinced that they are God’s chosen people for this next chapter of the journey for The Salvation Army in Australia.

You can anticipate that the work of continuing the transformation will be prioritised and scheduled appropriately, ensuring that missional delivery remains core to the decision making.

As we leave Australia, we go with the confidence that The Salvation Army in Australia will continue to share the love of Jesus as you care for people, create faith pathways, build healthy communities and work for justice. We leave with you a promise from God’s word that we have personally carried in our ministry and claim for The Salvation Army in Australia: “… confident of this, that he who began a good work in you, will carry it on to completion until the day of Christ Jesus” (Philippians 1:6 NIV).

Thank you for allowing us to partner with you on this journey and God bless you all.