You are here: Home › Features › Ageing With Dignity The Salvation Army specialises in caring for the elderly and will step up this com - mitment with an extra four residential centres as part of a new national agenda for aged care. Photo: James Horan

Hundreds of additional individual living units for older people vulnerable to homeless - ness are the centrepiece of The Salvation Army’s new national agenda for aged care.

The new agenda, says Chief Secretary Colonel Mark Campbell, provides “... renewed focus on serving the most vulnerable people in our society – ageing Australians who find themselves homeless or financially vulnerable”.

Four new residential centres will be established to provide up to 200 individual units for older people identified as homeless or in danger of homelessness. The new centres will be built in capital cities or large regional centres, depending on identified need.

Read the story of Paul Beecroft, who lives in the Montrose residential care complex for former homeless men in Sydney HERE.

Two existing centres in Sydney and Melbourne already provide residential aged care living for 160 people. The new national agenda also includes increasing the number of low-cost rental accommodation units for older Australians from the current 360 units to 700, and a substantial increase from 480 to 2000 in the number of people who will receive in-home care. 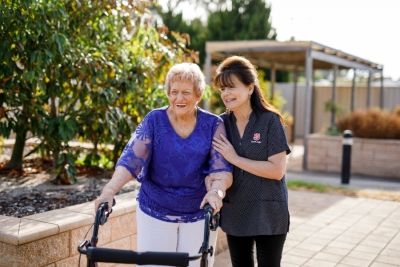 The agenda is being driven by a new-look Salvation Army Aged Care unit, led by National Director Richard de Haast, who was recruited 12 months ago.

Richard, 52, was born in Zimbabwe (formerly Rhodesia). His father was the general manager of the first multiracial hotel in Zimbabwe.

His parents’ strong social justice leaning influenced Richard. When the family moved to South Africa at the height of the country’s apartheid era, Richard studied for the Catholic priesthood and a law degree.

While at university, he was arrested for protesting South Africa’s apartheid system. He followed his father into hotel management, then human resources and recruitment, graduating with a Masters degree in International Hotel Management.

In 2000, with his wife Katherine and then four year-old daughter Rosemary, he moved to New Zealand, working in recruitment and aged care management. He also completed a Masters degree in Business Administration.

The family, which includes a son Gabriel – now 16 – moved to Sydney in 2014 to work in management with the private health fund BUPA. Richard started in The Salvation Army Aged Care role in September last year.

“The role with The Salvation Army continues my lifelong experience of working in customer service,” he says. “I would say that I have definitely had a calling. It’s a calling to serve people. It wasn’t meant to be in the priesthood. The calling is to the community."

“With The Salvation Army, I have been given an opportunity to change the way we serve our customers, especially the homeless and vulnerable. I call it muscular Christianity. It’s a call to action. It’s at the heart of what we are as a Salvation Army.” Richard says he likes to apply a personal 30 per cent rule to any work role. It means he has to feel uncomfortable at least 30 per cent of the time through challenges with job complexity, change, and lots of customers and staff providing pressure.

Aged care in The Salvation Army is undergoing an enormous transition, he says, so there is plenty of scope for the 30 per cent rule to provide the challenge he needs. His personal goal is “to make a difference”.

“In The Salvation Army, we have the ability and opportunity to make a difference for elderly people. Providing a home and a community for older Australians is more than just giving them a bed. It’s about giving them belonging.

“In aged care, your customers actually live with you. Our job is to go on the journey with them; to show them that they are unique and that we want to provide the best care possible for them.

“Back in February when this journey of change started, I asked Colonel Mark Campbell if he supported what was being proposed. He said it was part of who we are as The Salvation Army; that the way we care for our older Australians was a wonderful expression of who we are.”

To learn more about The Salvation Army Aged Care services go to agedcare.salvos.org.au