You are here: Home › Features › Discipleship In A Material World

Discipleship in a material world Discipleship in a material world

Living out our discipleship in the midst of our everyday lives is the theme of the upcoming Axios Conference, being held in Sydney next weekend.

Major Amy Reardon is an author, member of The Salvation Army international Doctrine Council and, alongside husband Rob, corps officer at Seattle Temple Corps in Western USA. Balancing work, life, faith and family (which includes five children) is something she tackles every day of her life and will be speaking about at the Axios Discipleship Conference in Sydney next weekend. She recently spoke to Pipeline Online about her own formative discipleship experiences.

How did you become involved in the Salvation Army?

I grew up in Southern California. My parents were Salvation Army soldiers at the time, and they raised my two siblings and me at a big, active corps in Hollywood (which later moved to Pasadena). From my childhood and into my teenage years, my corps held an open air every Sunday at the famed corner of Hollywood Blvd and Vine St. The band and timbrels and other soldiers marched down the boulevard until we arrived at our corner. We attracted a lot of attention and the open airs were quite lively. Hollywood was pretty crazy in those days so you never knew what bizarre thing might happen. More than anything else, I think it was those bold marches down the street to proclaim the Gospel that made a passionate Salvationist out of me.

What have been some of your formative discipleship experiences?

I loved the Lord as a child and even dreamed of being an officer some day. My parents sent me to Christian school, and when I was nine my classroom teacher said to us: "You are all old enough to read. You've no excuse for not reading your Bible." Even though we only had the King James Bible back then, I began reading my Bible every day. I fell in love with it. By the time I was in my teens I was nearly obsessed with it. I was especially driven to try to understand what holiness was. My parents had given my brother the middle name of "Brengle" - after the great Salvation Army holiness teacher. So I read books by Brengle, which generally frustrated and confused me. But I didn't give up on pursuing God and his truth. I decided when I was about 16 that it would be my life's pursuit to know God. That is still the great pursuit of my life.

I had a good many inspirational corps officers over the years, and I also was mentored through Army music programs. When I was growing up, discipleship and mentoring weren’t talked about much. But in the corps band I sat next to the great euphonium virtuoso, Wilf Mountain, for a couple of years. As he coached my playing, he also coached my life. Despite this, I had a real problem. I was often convinced that God didn’t really love me. Everyone else, yes. Me, no. Eventually it drove me to do stupid things and make huge life mistakes. I went through some very dark years. But my life turned around when I encountered the Lord in a mighty way and promised him I would follow him no matter how scared I was. I went to training college about six months later. 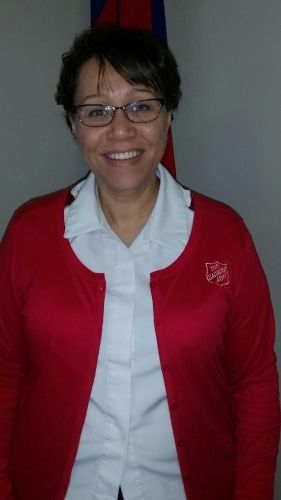 Amy Reardon will be speaking in Sydney next weekend.

Can you tell us about your family?

I'm married to Rob, a lifelong Salvationist who hails from Toronto, Canada. We have five kids: four sons, ages 28, 20, 18 and nine; one daughter, age seven. The youngest two were adopted from the West Indies three and a half years ago. My oldest son, Kyle, is getting married this September to the beautiful Kayla, so then we will proudly be claiming six kids.

What are the things in your life that help you juggle multiple roles and responsibilities?

It is realistic to realise that you can do all things through Christ who strengthens you ... but not all at the same time.

I'm blessed with a very supportive husband. He values my contributions to the Kingdom. He insists on me being everything God has made me to be and doing everything God requires me to do. I hope I do the same for him. We believe in equality and we work as a team at home and at the corps.

But to be practical and specific, let me offer two things. First, when I was in seminary I had young children and I was a busy officer. I asked God to take the hours of my day and multiply them as he had done centuries ago with the loaves and the fishes. Let me work faster, let my mind be more focused, I prayed. Long after graduation God continues to say yes to that prayer. Second, I have had to learn to let some things go. My first year back at the corps (after 11 years as headquarters officers) I would panic if I didn’t know every detail of everything going on at the corps. Would people perceive me as a bad officer if I didn’t know where the light bulbs were? Finally, some close loved ones convinced me that not everything was my personal burden. That freed me up to pay more attention to my kids and to do some of the things that God has called me specifically to do.

What do you think are the challenges this generation faces, and what are some ways families can respond?

I think one of the toughest challenges is to convince our children that truth is not relative and that not all religions are equal paths to God. These are old ideas that never completely vanished, but they have come back with a vengeance. There is a true God. There is a true plan. Our children must know this. If we compromise on this truth in an effort to be accommodating, we wind up being cruel, hoarding God’s truth for ourselves. In addition to that, the world has changed dramatically, but the needs of children are as they have always been. They need to see their parents pray and study their Bibles. They need to be led in family times of Scripture and prayer. They need to know that regular worship with the body of Christ (i.e. in church) is the family priority over sports, recreation, etc.

One thing that has helped our family is that we have a 24-hour Sabbath from Saturday night at 6:00 to Sunday night. No school work, no chores - just worship, rest and family fun. We started that practice about 15 years ago and it was the best move we ever made for ourselves and for our family. It has made clear to our kids that we value worship and we value each other. It underscores our priorities.

What do you wish you had known or learnt earlier in your discipleship journey?

I wish I had known that the love of God is relentless. I wish I could have understood that nothing, nothing, nothing can separate us from the love of God, and that it is the ploy of the Evil One to convince us otherwise. I know that God has designed me purposefully and loves me the way I am, but it took me too long to learn that.

The Axios conference, being held 12-14 August at The King’s School, Futter Hall, Parramatta, Sydney, will focus on equipping followers of Jesus to live their faith in a practical, everyday way.  Further information and registrations HERE