Michael taking a few bars rest after 70 years of banding 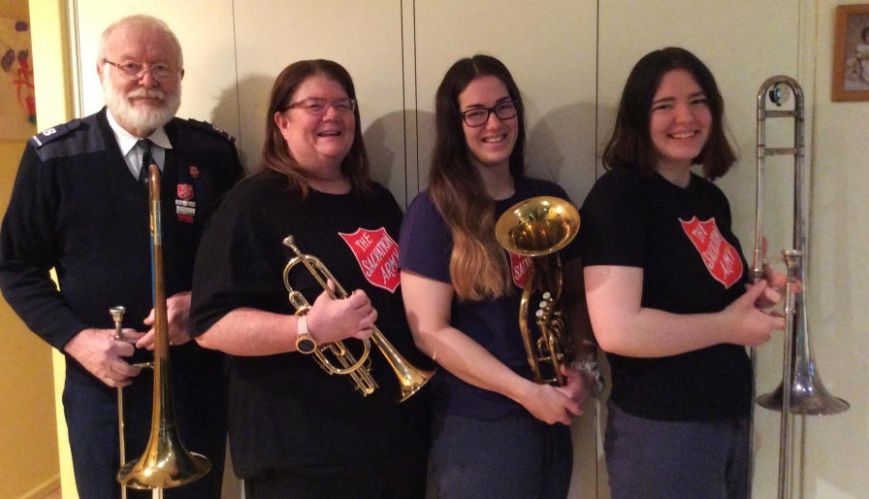 Michael taking a few bars rest after 70 years of banding

Michael Adnams was seven when he was handed a cornet and taught to play at Lewisham Corps in London. Seventy years later and having played in several corps bands, he has just packed away his mouthpiece for what could be the final time. Others reporter DARRYL WHITECROSS interviewed Michael about his experiences as a long-serving bandsman. 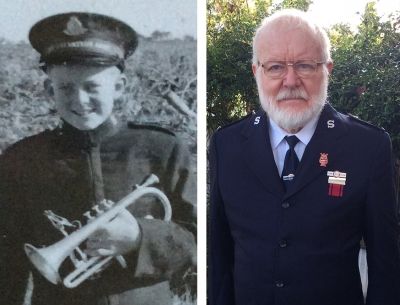 A young Michael Adnams (left) with his cornet on the family property at Sunnycliffs in Victoria, and about 65 years later on his retirement from banding.

Where and how did your journey start as a bandsman?

I grew up in Bromley, Kent, in England. I was dedicated as a baby at Poplar Corps [London], but the family transferred to Lewisham [London], where I began learning to play the cornet when I was seven. In 1957, when I was 13, my whole family [parents Harry and Joyce and siblings Graham and Marilyn] packed up and left the rellies and immigrated to Australia and settled in Mildura [north-west Victoria]. My dad struggled to find work after the war [World War Two] and was sponsored by a Mildura auto electrician to come to Australia. It was a bit of a jump to go from the middle of London to Sunnycliffs [about 10km south of Mildura], where your nearest neighbour was a quarter-mile away.

What bands have you played in?

I played in the Mildura Corps band until 1974, when we decided to go on a working holiday around Australia, which lasted four years. I played in Whyalla and Hindmarsh corps bands [South Australia] and the Bunbury band [Western Australia]. The family returned to settle in Adelaide in 1978, and I played the trombone with the Campbelltown band [now North East Salvos] until my health forced me to retire in August. I’m now on the band reservist list. We worked it out the other day: I’ve actually played every instrument in the band.

What was it like to have had your daughter, Karen (McDonald), and granddaughters Jenae (McDonald) and Maegan (Peckover) playing in the band with you?

Very proud. It was good when Jenae swapped the cornet to sit with me on the trombone bench.

Who taught you to play when you were a young lad?

Ernest Harvey. He was 17 or 18 at the time. He was a terrific people person and a good friend.

Bandmaster Will Overton, from Lewisham Corps, and the principal trumpet player with the BBC Symphony Orchestra, had a real way of getting expression into music. I enjoyed playing under Frank Whitecross (Mildura Corps). Favourite piece: Timaru Young People (Dean Goffin, 1951), which was the first march I played in the junior band. Favourite band: Regent Hall. Favourite memory: There are so many but playing on Easter Sunday morning at sunrise in front of the Mildura Arts Centre was absolutely one of those special mornings.

Outside the Army, work for you was as a plant engineer but, apart from being in the band, what else have you done in the church?

I was involved with The Salvation Army Emergency Services (SAES), and I was assistant state coordinator under John Dunkley. I was in the whole thing for about 25 years. In Victoria, I was involved in Scouts, and I switched across to start Boys Legion in Campbelltown and then got that going and then moved up to the Legion training team for the state. My wife, Lorraine, was also on the Guards training team, so we basically formed the SAGALA (Salvation Army Guards and Legion Association) training team for 10 or 12 years.

How has your faith sustained you throughout life?
God has been in every element of our lives.