You are here: Home › Features › Drurys Always Ready To Pack Their Bags For God

Drurys always ready to pack their bags for God Drurys always ready to pack their bags for God

Not many people will pack their bags and move to a new country to follow God’s calling. For Salvationists Dr Len and Janet Drury, however, this scenario has been a big part of their lives over the past 30 years.

The semi-retired couple, who attend Campsie Corps in Sydney, have sacrificed the comforts of home many times in order to live and work in different cultures all over the world. They have witnessed terrible tragedies and, at times, put their own lives at risk, but they say to be able to share the love of Christ in these countries has been a challenge and a blessing.

The Drurys have worked in 50 different countries and lived in 10, including Myanmar (formerly Burma), Pakistan, South Sudan, Oman, Somalia and most recently, Bangladesh. Dr Len, who for many years worked as a hydrogeologist for Australian consulting companies, was often contracted to oversee water or mining, oil and gas projects across the South Asia/Pacific, Africa and Asia/Middle East regions.

Each time the Drurys move to a different country, they never know how long they will stay. Sometimes it’s for six months, other times more than three years. No matter where they end up, the Drurys always connect with the local Salvation Army in that country and offer themselves for service. 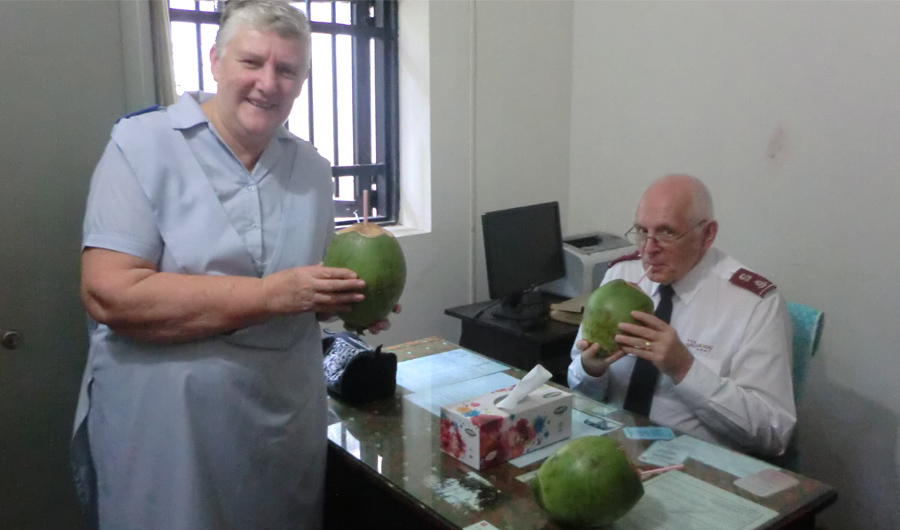 Janet and Lieut-Colonel David, drinking straight from a coconut shell.

“We just believe that God has appointed us to each country,” Dr Len says. “Wherever we go, wherever the Army is established, we become part of the Army there and do what we need to do. Every place has had a purpose, so we never question. When an offer comes, we just go. Our mission is to fit in where we fit in.”

Writing a new Junior Soldier program for the Pakistan Territory, teaching English language to cadets in the Jakarta Officer Training College, being a member of the Indonesian Advisory Board and starting Young People’s Bible lessons in Muscat were some of the God-given opportunities for service.

Having lived in many countries where Islam is the dominate faith, the Drurys have experience relating to Muslims and found many opportunities to share the love of Christ with them. “Because we understand Islam – the politics, culture and people – it’s so easy to discuss Christianity with them. It comes through friendship and living out the Christian life – then waiting. If you shove Christianity down their throat, they will just reject it. Eventually they will come around and ask about Christianity,” Dr Len says. 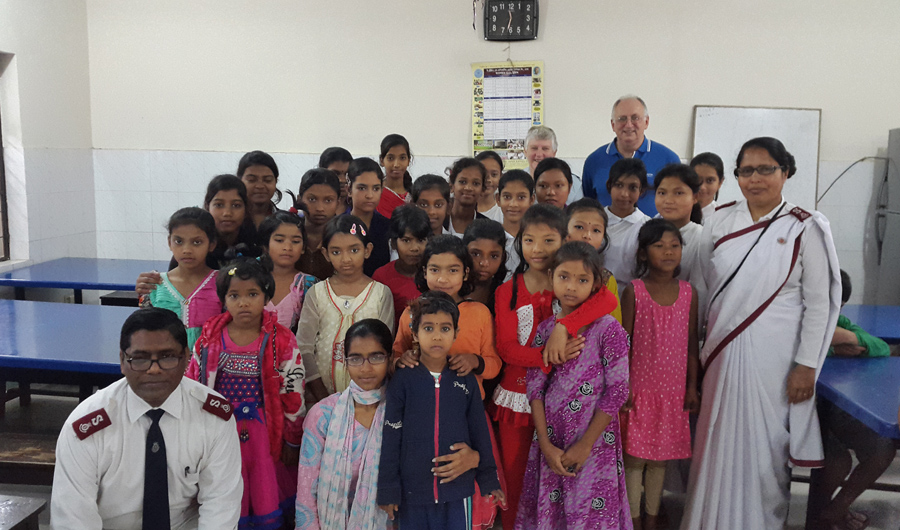 Girls who live at the Savah Complex in Bangladesh.

Dr Len’s company driver in Bangladesh was a Muslim. “It became evident from conversations with him that he was observing a new way of life as we treated him with respect and would discuss why our Christ-centred life made us different to others,” Janet says.

“Sometimes the Army is established enough that they don’t need a lot of help. Many expat officers live and work in the same building or compound so we might take them out to dinner or go to the movies. Do that kind of thing to give them space outside their work responsibilities,” Janet says.

The Mirpur Clinic Corps specialises in the treatment of patients with leprosy and tuberculosis. Earlier this year, Janet, the Mirpur Clinic Corps officers and Lieut-Colonel Priscilla were asked by a Muslim woman to pray for her brother who suffers from tuberculosis. “We surrounded him, not only with our presence but our prayers were raised to God on his behalf. The young man made a sign with his hand acknowledging the officer as he prayed. It [was] a very humbling experience and one that will stay me forever,” Janet says.

The Drurys would also visit the Savar Complex, located outside of Dhaka, and assist with ministry opportunities there. The Savar Complex has a school, girls home, a home for visually-impaired boys, a corps and a training college for officers. 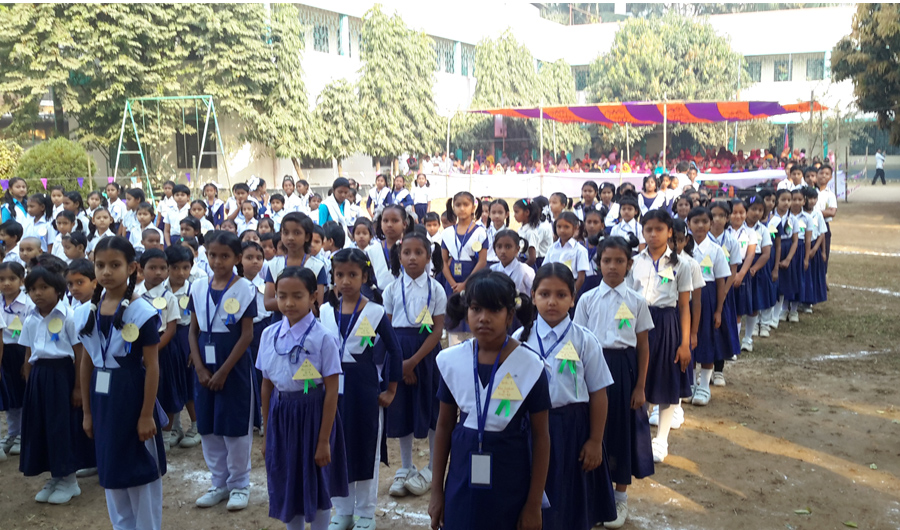 Children completing sports activities at the Savar Complex in Bangladesh.

Bangladesh remains a country close to the Drurys’ hearts. “We still keep in contact with people and let them know that we’re praying for them,” Janet says.

Burma (now Myanmar) is another country where the Drurys were able to have an impact for God. Len’s job took him to Burma where, in 1984, Salvation Army personnel and other ministers had restricted access to the country. However, over the next three years, the Drurys were able to assist with the establishment of the officer training college and, since that time, more than 200 officers have graduated from the college.

The Drurys could tell many more stories of how God has used them. However, the couple refuse to focus on the success stories as a way to measure their experiences, rather choosing to trust God for results. “God has just used us and blessed us wherever we’ve been,” Janet says. Len adds: “We’ve always felt we’ve gotten more out of it than we’ve put in.”

Despite being in their 60s, the Drurys say they are still open to new overseas opportunities and will once again pack their bags and follow wherever God leads them.