You are here: Home › Features › Fighting The Good Fight 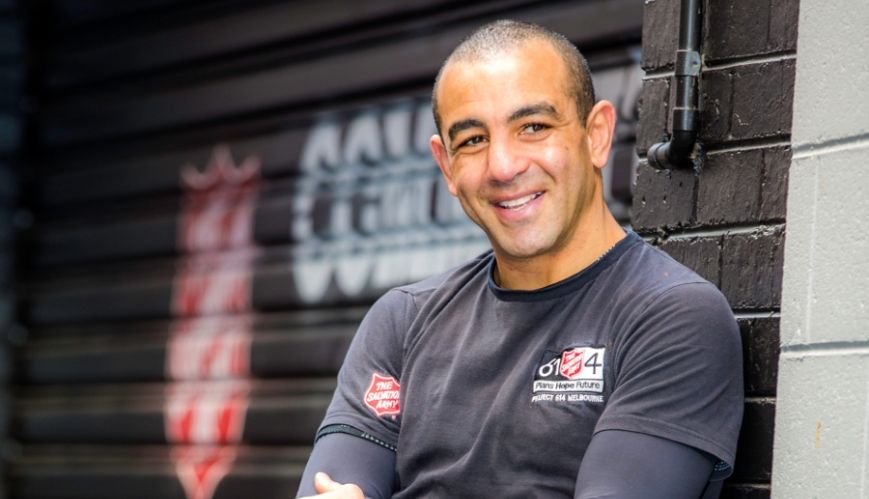 Boxing champion Sam Soliman is a hard man in the ring, but has a soft spot for The Salvation Army. Photos: Bruce Redman

In the ring, they call him the king – King Soliman. Like the biblical King Solomon – after whom he gets his boxing name – he is a wise and wily fighter. He’s good. He’s been world, commonwealth and Australian champion. Sam Soliman is his real name and as his extensive and highly successful boxing career comes to a conclusion, he has sided with The Salvation Army to help people living on the streets.

Sammy, as he is known around The Salvation Army’s Bourke St building in Melbourne, will have his last professional fight this month after 20 years and 60 bouts in the boxing business. He was International Boxing Federation World Middleweight champion in 2014. He was also world kick-boxing champion in 1991-95 and has won national titles in taekwondo and karate. 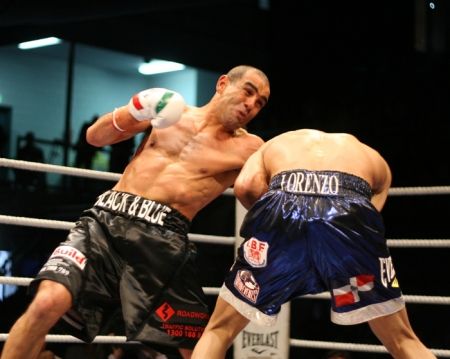 Boxing experts predicted in 2011, at 38 years of age, that he would be finished as a professional boxer by 40. He was determined to prove them wrong.

Since that prediction, he has had a further eight fights, winning five – including the world title – and will be almost 44 when he hangs up the competitive gloves. His advantage, he said at the time of his predicted downfall, was that unlike many other professional boxers, he had never smoked a cigarette, drunk alcohol or taken drugs at any time in his life. He had also insisted on a healthy diet and was the hardest trainer of anyone he knew. In boxing circles, he is known as “The Machine”. He took 10 weeks off work at The Salvation Army’s Melbourne 614 centre to prepare for his final fight. Nothing is allowed to distract him as he prepares for his next bout. “God willing, the September fight will be my finale,” he told us. “After that, I hope to be still going in my 70s in this job with the Salvos.”

At 614, he runs a daily fitness program and café for the homeless (pictured below right).

Major Brendan Nottle, who is 614 Corps Officer with his wife, Sandra, says Sammy was a standout for a role he (Major Nottle) wanted to fill. “I first came across Sammy when he was doing some work with the Victorian Justice Department,” Major Nottle said. “He was meeting with disadvantaged kids, providing them with strategies for making good choices and avoiding bad choices. I thought, wow, this would be a good guy to have around our centre.” 614’s main work is with the homeless and people at risk.

Raised on the streets of Brunswick, in Melbourne’s inner suburbs, Sammy was taught the value of being kind and helping others during his childhood. His parents, he says, were great role models.

They were the people who taught him the value of making good life choices.

“Mum and Dad were church people. I went to Sunday school. They taught me to think about the consequences of choices I made. Sometimes, I made bad choices. But I learned from those bad choices. That’s what I talk to kids about today.”

Sammy has addressed young people in more than 300 schools in the past five years. He has a reputation in the boxing business as “a nice and decent guy”.

An internet evaluation promoting him as a guest speaker says: “Outside the ring, Sam Soliman is a well-spoken gentleman with a quick wit and infectious smile. Sam has a charisma that very few fighters possess. He not only lights up the room, but when Sam enters a room there is an aura about him. It is not just because he is a world-class fighter, but a genuinely decent person who does not carry airs and graces, and always has time for others.” 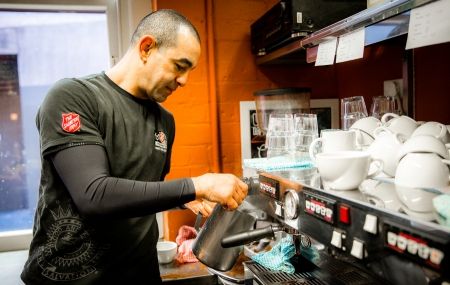 That’s pretty much how Major Brendan Nottle sees Sam Soliman at 614. “He’s always smiling; he’s always doing something to help someone. That’s why we love having him around the place here at 614. He is such a positive influence in this place.”

My barber, “Nudge”, a boxing guru, knows about Sam Soliman, the boxer.

He has a very high regard for the King. When I told “Nudge” what Sammy was now doing with The Salvation Army, he said: “I’m not surprised. He’s a world champion, you know. He’s also a champion bloke – so humble. He’s always smiling. I saw a few of his fights.

When he walked down the aisle from his dressing room to the ring, he always stopped to shake hands with people in the crowd. And he used to say ‘Thanks for coming’”.

Brisbane’s Courier-Mail boxing writer, Grantlee Kieza, recalled in an article in April an incident involving Sammy while preparing for a fight against Dutchman Raymond Joval in Las Vegas, USA, in

2004: “Joval came into the ring with his orange hair gelled into a kind of emperor’s crown,” Kieza wrote. “But there was a new king in town, as Soliman hit Joval so often from so many angles, Joval thought he was surrounded. “Before the fight with Joval, as he prepared himself under a canopy beside the casino, Soliman spotted a group of kids playing outside in the broiling heat.

Soliman stopped his preparation and trotted outside to usher the kids back into the shade. The ferocious Dutchman (Joval) didn’t worry him, but he was scared the children might get sunburnt,” Kieza concluded.

In a testimonial to Sammy, boxing legend Johnny Lewis, who has trained six world champions, said: “He has so many qualities, including respect, integrity, honesty, trustworthiness and sportsmanship. He is extremely kind and always well behaved with an attitude that makes him nature’s gentleman.”

So, this is the Sammy Soliman now working with The Salvation Army. He has set up a gymnasium in the building basement, teaching homeless people who use 614 as a community base the value of fitness and how to defend themselves (pictured right). “A lot of the people who come here are not in a good space when we first see them. They live on the streets, so there’s not much to be positive about for them,” he says. “If they start looking after their fitness and health – and that’s what we do – then it has to be good for their body and mind. It puts them in a better space. That makes them happier people and makes it easier to start to deal with your problems. We’re already seeing that happen. The ones who come back day after day are getting better motivated. We can see it in them.”

Sammy also serves the homeless in the 614 café and finds them clothing, especially on cold nights. At a Sunday morning service before going into camp for his final fight, Sammy showed off his world championship belt and shared stories of God’s protection, especially in the boxing ring.

He told the congregation of his confidence in God to keep him safe. “God brought me to this place (614),” he said. “I believe that God has something for me to do with the homeless people who come here. He has helped me make good choices in my life, so far. I’m sure that being here is another good and God-choice.”