It can get down to sub-zero temperatures in the south-west NSW regional city of Wagga Wagga. And while many people would say the city doesn’t have a homeless population, you will find dozens of people living in cars or sleeping rough if you know where to look.

One man who does know where to look is Mat George. The Wagga Wagga Salvos member has a strong calling on his life to stand alongside people who feel ‘unseen’ by the world. In the lead-up to winter last year, he and the then leaders of Wagga Wagga Salvos, Captains Kara and Stewart Hartley, and fellow member Ned Jones began to reach out to people experiencing homelessness in the community.

“A lot of people, unfortunately, think that all homeless people are alcoholics and drug addicts,” says Mat. “It’s quite the opposite. Trying to afford to pay your rent and pay your electricity and have food and still have some sort of quality of life, just don’t all go together ... if you’re on Centrelink benefits.”

Throughout winter 2020, Mat and the team would stock up the church bus with a full urn, some meals, snacks and clothing and other items from the Wagga Wagga Family Store. They drove the city streets, walking around parks, along the riverside and in other areas they knew of that people experiencing homelessness may take shelter. In the process, they formed friendships with people sleeping rough, living in their cars, camping and couch surfing. They were able to help with material items like swags, bedrolls and warm clothing. But just as important was the hot cuppa and a chat.

“For me, it’s about giving back to the community,” says Mat. “Those who feel forgotten and those who feel like no one cares. I like to show them that we actually do care, and we do know you’re there. Going out pretty much rain, hail or shine because they’re still homeless [in whatever weather].”

There are currently no free shower or laundry facilities in Wagga Wagga, and Mat and the team would love to build a mobile laundry and shower trailer. “We take a warm shower for granted at the end of work and clean clothes. We just throw them in the wash and don’t even think twice about it,” he says. “These guys are washing their clothes under a tap, and showering is something they don’t get to do often because you have to pay money in town at the local pool, which is a few dollars, which could mean dinner or a shower.”

In the trailer that’s being dreamed up would be a slide-out barbecue, so that instead of giving away pre-cooked meals to people, the team could cook up some dinner and sit down and share a meal with their new friends, enabling deeper conversations about life and faith.

By his own admission, Mat hasn’t always been a “good Christian boy”. After the death of his mother, he found himself in a “pretty dark place”. He was only casually employed and was experiencing some of the issues with poverty that he now assists people with through his ministry. “I had a house, but at the same time, I was struggling to make all the payments and pretty much down to living pay-day to pay-day and struggling to have a decent meal on the table every night.” 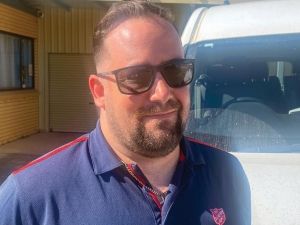 Instead of hitting the streets, Mat decided to head down to the Wagga Wagga Salvation Army store and offer to volunteer to “keep myself out of mischief.” Through volunteering, he attended Sunday services, got more involved in ministry and became a senior soldier. When a job came up as Family Store Warehouse Manager, Mat said he was “blessed” to have been successful in his application.

The Salvation Army believed in Mat and saw his potential. Now, he’s looking to do the same for others. “For a lot of these people – no one has ever believed in them. No one’s given them the opportunity, so if you believe in someone, they go, ‘Oh wow, that person has given me the opportunity,’ and they thrive on that, and they push themselves to make themselves better.”

Mat feels God pulling him deeper into Christ and plans to further his studies this year to better assist locals struggling with drug and alcohol addiction.

One of the founding volunteers of the Wagga Wagga Corps’ street outreach ministry is Ned Jones. Before he was a Salvation Army soldier, Ned was involved in the occult. He describes that time in his life as one of “searching” – “I was searching for something. The meaning of life, I suppose,” he says. 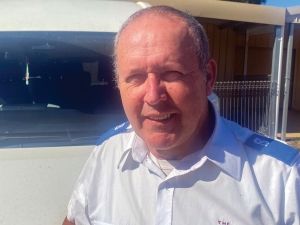 He remembers that one day, the leader of his ‘psychic circle’ said, “We are doing this for God.” And it caused Ned to investigate. He had an old Bible at home his mother had given him as a child, but he’d hardly ever opened it. After the statement by his occult leader, Ned dusted it off and began to read about Jesus. “I found out what the Bible said about seeking out mediums and familiar spirits and things like that,” Ned says. “Once I read that, I had to get out of [the occult].

Ned became a Christian and felt called to join The Salvation Army in Wagga Wagga a few years later. He says he loves serving Jesus and jumped at the chance to be in the team that began the week street ministry for people experiencing homelessness in the local area.

“We just stand and have a chat and talk about their life and where they’ve been and what they intend to do,” he says. “We are the hands and feet of Jesus to these people, whether they recognise that or not. We show kindness and love to them, and hopefully, God can grow a seed in them.”