You are here: Home › Features › Going Smaller For Greater Impact In Rockingham A large number of people from Rockingham Corps in Western Australia are involved in a new way of being the Church through ‘discipleship huddles’.

When you’re the leaders of a large, healthy, financial corps, there isn’t much impetus for change. “If it ain’t broke, don’t fix it,” as the saying goes, right? That was the case for Rockingham Corps Officers Majors Chelsea and Darrell Wilson until God stirred their spirit during the 2020 COVID-19 lockdown period.

“[As a body of Christ] we are called to disciple and we are also called to gather. But we think the balance is out,” said Darrell. “We are very aware that there are many people in our city who will never come to a church service and we realised we needed a new strategy if we are going to see the people in our city find God.” 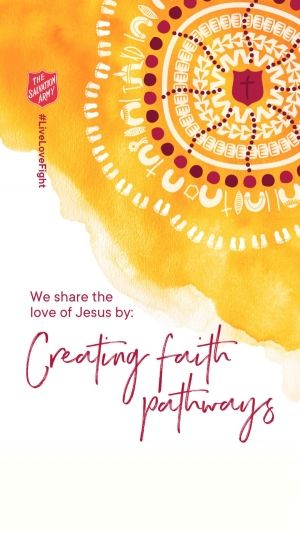 For many years, the officers had taught from the pulpit and in small groups about the importance of discipleship but have realised in hindsight that the biggest growth in this area only occurred after stepping out in faith and introducing major structural change within the corps.

Now, The Salvation Army Rockingham Corps is a body of Salvos who have a large number of ​people in ‘discipleship huddles’. The huddles of four to six people (sometimes more if whole families with children are involved) meet intentionally once a week to read scripture, seek to understand where God is at work in their lives, pray for one another and encourage one another to live out their faith in mission.

“We really emphasise the whole ‘Discern and Do’ – discern what God is telling us ... to read scripture together and to look at what Jesus is teaching us and really focusing on what do we feel like God is wanting us to do with what we learn – to put into action (practically),” said Chelsea.

Once a month, the corps meets for gathered worship and to celebrate what God has been doing in people’s lives during that month and to be equipped to be followers of Jesus. Already, the people involved in the huddles are gaining momentum as they delve deeper into God’s plan for their lives and the lives of those around them.

“One opportunity that has come up is looking at Alpha in the prisons, which one of the huddles is super keen on helping to lead that,” said Darrell. “That’s going to be awesome because we have a prison down the road and they just feel called to that.”

Another member of the corps led a family member to faith who wasn’t keen on attending church. They connected with a friend, who used to attend the corps but had stopped coming and are now meeting weekly. “The guys didn’t want to engage in, I suppose, your traditional church and they were really excited about what we were doing, so they formed a huddle,” said Darrell. “I think once we embed the culture the potential for growth and reaching out in the community is just amazing.”

Chelsea and Darrell said it’s exciting to see a good amount of the people engaging with the new format and becoming empowered to read and understand scripture themselves and discern the voice of God in their lives. For those in the congregation who miss gathered worship, the corps has introduced a fortnightly midweek chapel service, and its Celebrate Recovery service is still held on Friday nights.