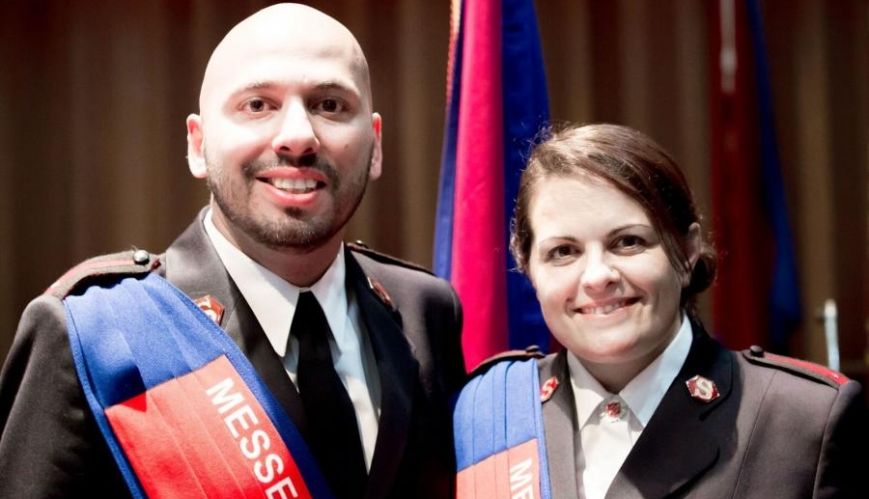 They were only a few moments, but they would have been precious for a faithful, elderly Salvationist from a regional Australian corps.

As Paul (Pavlos) and Rachel Mina-Anastasiou (pictured left) were ordained in Sydney as Salvation Army officers on 25 November, my thoughts focused on Jim Moisidis, who once served at Tarrawanna Corps, on the NSW South Coast.

For 20 years, Greek-born Jim (real name Dimitrios) pleaded from Australia with Salvation Army international leaders, including three Generals, to “come over to Macedonia” – just like “the man of Macedonia’s” plea to St Paul 2000 years ago (Acts 16:9) – and start The Salvation Army in Greece – his homeland.

Jim’s pleas were always treated with respect and encouragement. In 2007, his prayers were answered when General Clifton Shaw announced it was happening. Jim saw it happen. He was promoted to glory five years later.

But by then, Paul and Rachel, despite being from a small Greek village and an orthodox background, had discovered The Salvation Army and linked with its work in the cities of Thessaloniki and Athens.

In Athens, they “heard the whole story and the important part  that Australia played so that The Salvation Army could come to Greece”. They were approved to train in Australia.

They did not get to meet Jim, but they did get to visit his corps at Tarrawanna and thank the people for standing with him during his long campaign.

I recalled Jim’s words in an article I wrote in 2008 about his mission. “I think God used Tarrawanna Corps to open the door  (to Greece),” he said. “I can’t prove it, but when I stand before God, I will ask him and he will tell me. I think he will say, ‘Yes, Jim,  I did’.” Well, Jim will have received his answer by now. 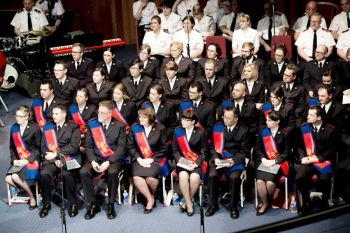 Paul and Rachel were among 15 cadets of the Messengers of the Gospel session who were ordained at the historic commissioning ceremony at Sydney Congress Hall.

It was the  first time since 1921 that cadets from the two Australian territories (Eastern and Southern) were commissioned at the same ceremony.

The combined commissioning was part of The Salvation Army in Australia transitioning back to one national territory.

At the Messengers of the Gospel commissioning, Rachel Mina-Anastasiou was invited to speak about her journey to officership. She spoke of growing up in a small village in Greece and the influence of Christian parents and grandparents. As a child, she thought her life was probably boring, but she wanted to serve God – maybe as a missionary.

“Funny, huh,” she said. “Here I am, far away from my homeland, a girl who trusted God with her life and calling, and now I am living the exciting life that God had already prepared for me. And now my path leads me out into ministry. For the last two years, I have been exercising and trusting and letting go and letting God take absolute control. Now, I have my exit ticket to go and my prayer is, ‘God use me. Break my heart for what breaks yours’.”

Representing all of the newly ordained and commissioned officers, Ben Anderson reflected on the impact that the move to one Australian territory had had on the cadets. “It was certainly not on the radar at all for the seven Messengers of the Gospel who were welcomed in Melbourne in February 2016  that we would be commissioned as a session of 16  in Sydney,” he said. 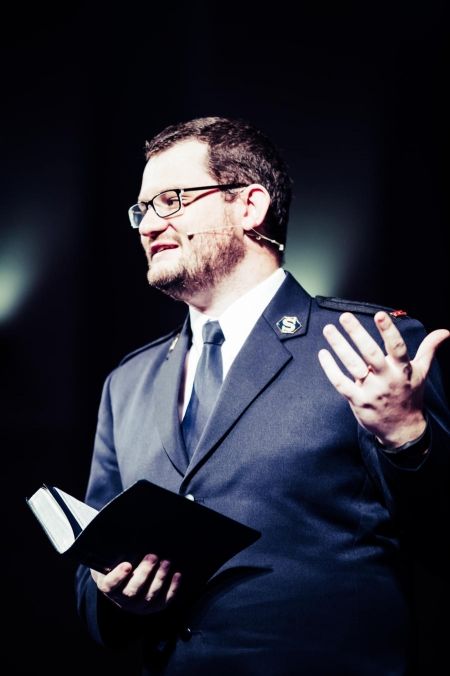 There had also been immense diversity of background of cadets. “As well as representatives from all mainland states, we had the privilege of training with Paul and Rachel from the Athens Corps in Greece ... cadets from two residential campuses, cadets-in-appointment ... and commissioning of a territorial envoy,” Ben added.

Despite the diversity, he said, the group shared two crucial bonds. The first was a training experience that equipped them to be better followers of Christ. The second was a name – Messengers of the Gospel – that compelled them to proclaim the good news of Jesus Christ by his grace and through his faithfulness.

Commissioner Floyd Tidd used Isaiah 61 as his text in addressing the newly ordained officers. He reminded them of their commitment as members of the Messengers of the Gospel session. “The Spirit  of the Sovereign Lord is on me, because the Lord has anointed me to preach good news to the poor...” was Isaiah’s message, he said.

The Messengers of the Gospel session, he said, had been anointed for the same role to a world desperate for good news, but suspicious of it because of the fake news of social media. “But it’s not just (the responsibility) of the 16 (new officers) on the platform today. The anointing is for all of us,” he said.

The Sunday morning family service, also held at Sydney Congress Hall, saw a continuation of the theme from Isaiah 61. The message, brought by Commissioner Tracey Tidd, focused on Isaiah 61:10-11, and was presented in a unique style that included both audience and child participation.

Commissioner Tidd began her sermon by asking, “It’s time to celebrate, anyone agree?” She had the children come up onto the platform and then engaged with both them and the adults in the congregation, in an interactive sermon.

As the newly commissioned officers from the Messengers of the Gospel session prepare to take up their first appointments across Australia, another group of Salvationists are about to embark on their journey to becoming Salvation Army officers. Ten cadets are about to start life at the National School for Officer Training in Melbourne.

The Messengers of the Kingdom officially commence their training on 31 January.

Rachel Mina-Anastasiou shares the story of her journey to officership.