You are here: Home › Features › Healed And Saved For A Purpose

'Healed and saved for a purpose' 'Healed and saved for a purpose'

Sue Hodges says her role with The Salvation Army allows her to be a ‘servant of God, a giver, and someone who connects others with Jesus’. Photos: Carolyn Hide

Sue Hodges, from the Wiradjuri people of NSW, is the Aboriginal and Torres Strait Islander Engagement Coordinator for The Salvation Army NSW and ACT Division. She is dedicated to walking with Jesus every day of her life and bringing others, particularly fellow Indigenous brothers and sisters, to him.

“I believe the ‘plans and hope for a future’ that the Bible talks about in Jeremiah 29:11 are for me,” she says. “God has led me to love serving others. I have been healed and saved for a purpose. I wouldn’t be here if it wasn’t for Jesus.”

Sue is proud to be a Wiradjuri woman. “I grew up learning about the history and culture of my people and I feel sad for those who were robbed of this,” she says. “This is part of the intergenerational trauma so many of us have lived with and still experience today.” 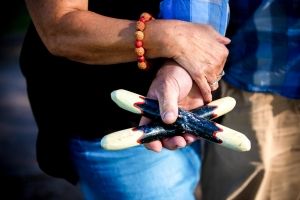 It doesn’t take long for Sue to speak about trauma, although she is equally quick to share about her happy childhood on the Nanima Mission in Wellington, on the Great Western Plains of NSW, and the many good memories she has.

“We were part of a mission environment – our family, my aunties, uncles and cousins,” she says. “I would play with cousins though, who would be there one day and gone the next. I later learned that ‘welfare’ came and took them away. Despite knowing some of what was going on, I was able to live in a fantasy land, skipping through pumpkin patches and chasing beetles. Maybe that’s how I became so resilient.” What she didn’t know, until just two years ago, was that her mum, who died when Sue was only 20, had been part of the Stolen Generations. “I always wondered why we couldn’t find Mum’s history for our family tree,” says Sue. “As a young teenager, she just seemed to suddenly be working as a nanny for white property owners. I just thought this was a legitimate job.

“I do remember my mother though, God rest her soul, saying that she was a ward of the state and couldn’t go home until she was 21, but only recently did I learn what that really meant. Mum and her siblings were taken and put into care after Mum’s mum, Nan, was hit by a car. I was in shock when I discovered this but it explained a lot too. Putting the pieces of this family puzzle together helped me to see what our people had been through and why they were struggling.” At the age of seven, Sue and her family, including cousins and extended community, were part of the Aboriginal Inland Mission, otherwise known as the ‘old AIM church’. “All our mob would come around to our place,” says Sue. “We were Christians and had church there quite often.”

Sue also remembers being segregated from the rest of the town unless they had exemption certificates. “Certificates meant you could move off the mission and live in the mainstream, send your kids to mainstream schools and gain employment in mainstream work,” she explains.

“I remember the racism that came with this, too. Me and my brothers were enrolled in the local public school but weren’t allowed to speak Wiradjuri, hunt traditional food, attend cultural performances or corroborees. Our families told us not to talk about our culture at school – they were worried we would be taken away. We lived in a white world at school, just to survive, but an Aboriginal world at home.”

Sue’s dad and mum passed away in 1981 and 1983, respectively. She also lost her three brothers, each in tragic circumstances, between 1989 and 2009. By then, she had married Michael and they had a son and a daughter. Sue was also active in Kairos Prison Ministry as a volunteer, a passion which continues today.

“I was a lost soul after my last brother died,” says Sue. “Alcohol took over for a while. I felt like I’d let my parents down. Different Christians were part of my life’s fabric though, and I didn’t want to lose that.” 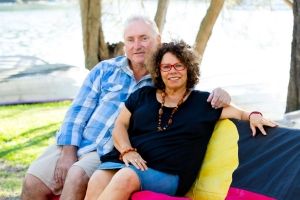 Sue and her husband Michael. The couple started their journey with The Salvation Army at Bonnells Bay Corps in NSW.

In 2009, Sue went to a Kairos weekend and gave her heart to Jesus. Soon after, she began attending a local Uniting Church. There she met a cousin, Jason, who was regularly going to The Salvation Army at nearby Bonnells Bay in the Lake Macquarie area of NSW. “Jason was like a brother to me,” she says. “As I got to know him better it was like unpeeling an onion.

I saw the damage done over the years and the impact of intergenerational trauma.”

When Jason was leaving the area, he invited Sue to come to his last Sunday meeting at Bonnells Bay Corps. Sue came, loved it immediately and started attending regularly. “That was 2015, where we [Michael and I] started our journey with The Salvation Army.”

Not long afterwards, Sue went to chapel at The Salvation Army Dooralong Transformation Centre (Recovery Services) on the NSW Central Coast. “As I watched the graduations at chapel, I was overwhelmed with emotion,” she says. “These people’s lives had been transformed. If only I had known about this place, and my brothers did, they might still be alive. My whole life changed that night.”

Sue became involved with Bonnells Bay Corps, Bible study, the café Connect, kids church and Indigenous ministry. She applied for her current role in 2017 and has been serving with the Salvos ever since.

“It’s amazing what God can do you in your life,” she says. “I’m a different person, a new person, and I love being the person God has made me. God gives us free will to do what we want to do, but gives us the strength to follow him. I am prone to depression, loneliness and negativity, but having a friend in Jesus means I don’t have to resort to getting a bottle of plonk. If I’m feeling down or want to cry, I can go to the Scriptures, pray about what’s troubling me, and get out of that space.

“I choose to follow Jesus. Now I’m praying my kids and grandkids will be saved. I pray they will see Jesus through me. Why wouldn’t I want to honour God and see others have what I have?”

Sue now sees herself as a servant of God, a giver, and someone who connects others with Jesus. She is passionate about reconciliation between indigenous and non-indigenous peoples and seeing healing for her people, particularly those in prison, where Aboriginal and Torres Strait Islander peoples make up 28 per cent of those incarcerated, despite being only three per cent of the general population.

“If we introduce them to Jesus and then to an inclusive and caring church, they are more likely to connect with the Christian life and be saved,” she says. “And if all Salvo services are on board
– our addiction services, domestic violence and homelessness services, family stores, EPlus, corps – if they are all aware of intergenerational trauma, we can work together to make a difference.

“Like Jesus gave me, I want to help bring happiness and new life to others through him and show them how to live a full life the way God intended.”