You are here: Home › Features › In The Eye Of The Storm

In the eye of the storm In the eye of the storm

From floods, earthquakes and tsunamis, The Salvation Army's International Emergency Services is at the centre of the Army's disaster response around the world.

The Salvation Army International Emergency Services (IES) has been providing support and assistance to territories, commands, regions and other countries affected by disaster and conflict for the past 25 years.

From floods, earthquakes and hurricanes to tsunamis and economic crises, IES, in partnership with other organisations, has provided trained staff and volunteers to support, coordinate and facilitate emergency relief and rapid response operations in challenging circumstances. It also offers training and resources.

As the world experiences the COVID-19 pandemic, IES is also assisting in the response through its trained local personnel and coordination of resources in more than 50 different projects globally. To see more on this response, click here. 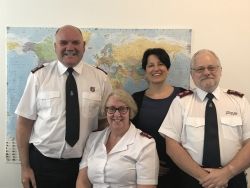 Under lockdowns, travel and other restrictions globally, IES continues to assist in a range of countries, including earthquake and tsunami relief in Indonesia, Hurricane Dorian response in the Bahamas and material aid in the Venezuelan economic and political crisis.

IES focuses on meeting immediate needs, building resilience and resourcefulness in others and empowering people affected by disasters and conflict around the world to live with dignity and hope.

Australian Salvation Army officer Major Drew Ruthven, (see Others magazine May 2020) serves in the IES Program Office, with a focus on Strategic, Security and Field Support. It’s a challenging role that sees Drew based in both Melbourne and at the Army’s International Headquarters in London.

When disasters occur, there is often a need to support impacted Salvation Army territories or mount a response by deploying international emergency teams. IES relies on the generous support of many territories and is grateful to have personnel who are well trained, experienced and available to deploy.

“When there is a natural disaster in a territory, the team contacts that territory to see whether they require any assistance in their emergency response and to let them know of the team’s availability,” explains Drew. “We only get involved if we are invited and if the event goes beyond the territory’s capacity to respond.

“We are in a unique position in the international NGO (non-government organisation) world, in that The Salvation Army is already in many of the countries where disaster strikes, has local contacts, is trusted and can mobilise resources quite quickly.”

The Salvation Army International Emergency Services have been making an impact in communities around the world for a quarter of a century. In the past decade particularly, the number and variety of responses and projects has grown, with the training of personnel and development of partnerships also increasing. Here we provide a brief snapshot of some of those projects, as well as what motivates this important ministry.” 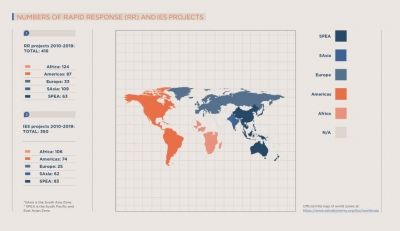 The work of the IES section is built on a rights-based and people-centred approach, which leads to a disaster response according to needs of the affected community. It works to a set of internationally recognised standards based on the principles of humanity, neutrality,

impartiality and the humanitarian imperative, recognising the rights of all people affected by disaster or conflict. These common principles and rights are perhaps best reflected in the following summary:

IES encourages a strong link between relief, recovery and long-term development with a focus on Disaster Risk Reduction.