You are here: Home › Features › Lets Hear It For Our Volunteers

Let's hear it for our volunteers! Let's hear it for our volunteers!

“Volunteer collectors are crucial to the success of the Red Shield Appeal and need to be appreciated and celebrated,” says Community Fundraising Director Andrew Hill.

Salvation Army corps and centres are being encouraged to treat their Red Shield Appeal volunteers to a big celebration during this year’s doorknock collection, being held this weekend.

The enthusiasm is coming from energetic Community Fundraising Director Andrew Hill, who is a self-confessed fan of getting The Salvation Army out into the community.

“This is the one big event of the year that we can get out and meet our community and do something helpful for fellow Australians in need,” he says. “It’s what The Salvation Army does. This year, 70,000 volunteers will come with us around the country. That is a great cause for a celebration.”

Andrew is suggesting that once all volunteers have returned with their collections, corps buildings and centres be turned into party venues. If celebrations can’t be held straight away, then plan for them at some other time, he says. “But, please, make sure that your volunteers know that they are appreciated,” is Andrew’s plea.

“Volunteer collectors are crucial to the success of the Red Shield Appeal and need to be appreciated and celebrated,” adds Andrew. “Make absolutely sure that they know they have made a magnicent contribution to assisting their fellow Australians who are struggling. If they raise say $100, let them know what that $100 will do to help somebody who desperately needs it. Let them know about the difference they will make to somebody’s life; that they are part of something much bigger.

“We want our volunteers to walk away from their collecting saying, ‘Wow! at was great. I made a difference’.” 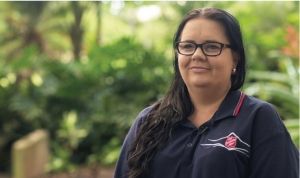 It’s the experience of Robyn Lewis (pictured right), who, as a community volunteer, participated in her first Red Shield Appeal as a 12-year-old in Townsville and three years later, after connecting further with The Salvation Army, connected with Christ and became a senior soldier of the Townsville Riverway Corps. Today, almost 30 years after her first Red Shield Appeal collection, Robyn is The Salvation Army’s Fundraising and Public Relations Manager for North Queensland.

“I remember my first doorknock as if it was yesterday,” Robyn told us for a previous article.

“There was so much activity. It was so exciting to be part of it. It was exhausting. We were tired and hungry, but back at the corps there were all of these people with food and drinks for us. They were so welcoming. I felt like one of the most important people in the world.” That, says Andrew, is exactly how he would love every volunteer to feel. “For us – The Salvation Army – our volunteers are the most important people in the world,” he says. “We want them to know that and a celebration is a great way for us to show them.”

This year’s public collection target nationally is $7.5 million. The total Red Shield Appeal target for 2018, which includes business and regular givers and donors, is $73 million. Appeal organisers are hopeful of reaching the target. “An appeal like this takes a huge effort,” says Andrew. “A lot of work goes in from a lot of people – from headquarters, through committees to corps. It is a vital time for our branding; for us to win new supporters. We receive huge media coverage. But it is getting harder. People’s time is in demand on many levels. Charities are always trying hard to capture the minds and hearts of volunteers to help. I think The Salvation Army stands tall in all of this. We bat above average.”

The official doorknock collection this year is 26-27 May, but local groups are encouraged to collect at the most appropriate time for them during May, subject to state regulations. “We know,” says Andrew, “that Sunday morning, which has been our traditional time of collecting, is now not necessarily the best time. Maybe it’s best for some areas to do their collecting on Sunday afternoon or on Saturdays or late afternoons during the week. We recommend that each local area work out what best works for them.”

Volunteers can register at doorknock.salvos.org.au