You are here: Home › Features › Qanda With Rosy Keane 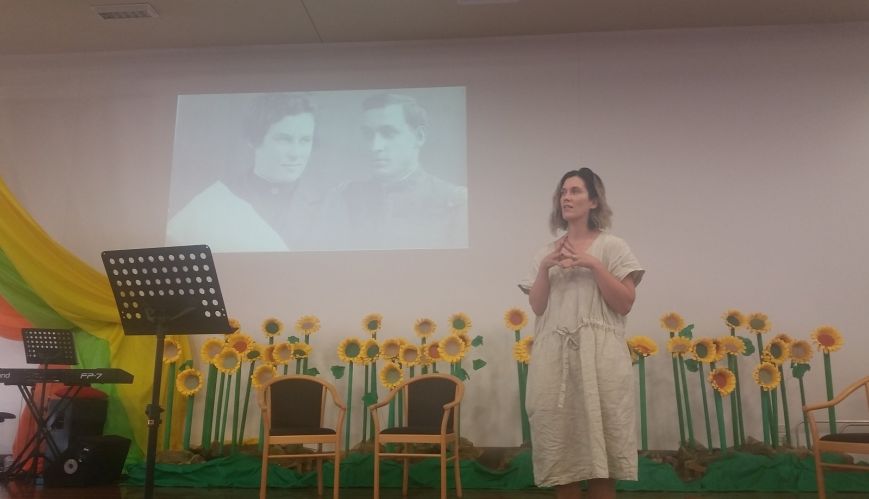 Rosy Keane was the guest speaker at the Captivated conferences in Queensland last month and is a specialist with The Salvation Army New Zealand, Fiji and Tonga Territory.

“We’re an Army, not a café. Let’s not break bread with injustice.” – Rosy Keane

Rosy Keane, Territorial Women's Ministries Social Media and Resources Specialist for The Salvation Army New Zealand and Fiji Tonga, was the guest speaker at the Captivated by the Word conferences in Queensland last month. Simone Worthing interviewed Rosy about the conferences, gender inequality, and redressing the gender imbalance.

SW: Can you tell us a little about yourself – your background and growing up years?
RK: I have three brothers, and my mother stayed at home with us full-time, while my father’s role as a radio station manager meant we had to move every few years. We were brought up Baptist, with my mother being the primary spiritual influence in our household – ensuring we read the Bible and prayed together as a family nightly. She was a Sunday school teacher, a prophet and a mentor, while my father, a concert-level pianist and brilliant musician, was the worship team leader at our church.

SW: How did you come into contact with The Salvation Army?
RK: At 13 years old, each of my siblings got to decide if we continued attending church on a Sunday. Regardless of our choice, we still had join the family for nightly devotions and prayer! I chose to leave church, and proceeded to ignore God’s insistent voice in my life. At 17, as a result of my wild partying and being a “girl-racer”, I had lost my licence for dangerous driving and needed to find a house walking distance to my work. At the same time, I decided to follow Jesus seriously as he refused to leave me alone and kept showing up to protect me. I moved into a dump of a flat – and my flatmates happened to be involved in a dangerously unsupervised “outreach group” that met on The Salvation Army Tauranga Corps’ property. When one of the “youth” threatened to kill me, The Salvation Army’s youth pastor intervened. She was courageous and brave and recommended I apply to be a youth intern. I did – at the same time I applied to be a tattoo and piercing specialist! I didn’t get the tattoo job (which was my preferred choice at the time) so I became a youth worker. I’ve been involved with The Salvation Army ever since.

SW: You were guest speaker last month at the Captivated by the Word conferences in Queensland. What impact did the conferences have on you?
RK: Captivated was a really awesome answer to God’s call and faithfulness. I feel called to be a preacher, but a couple walked out of church when learning it was me who was preaching that day, years ago, because they didn’t feel I had anything to offer – and made a point to tell people as they left before the service began. That wounded me deeply and made me question my voice. But God has said he is no respecter of persons, so neither must I be – God called me to this, so I strapped on my battle gear and went to speak to the women. I have a deep passion for women and seeing God release them in power and purpose, and this was an answer to my heart’s prayer. I saw women released and invigorated not by my words, but by the power of the Holy Spirit.

SW: How do you feel God used you during the conferences?
RK: I felt God used me to encourage women to be who Christ has formed them to be. Lego sets and Ikea furniture all have something in common – they come with a billion parts, an instruction manual and a deep sense of dread you’re going to have a whole bunch of material left over at the end of assembling it and the whole thing will fail. I believe that as women we worry we don’t have what we need, or too much of what we don’t need – in our lives and spirits and bodies. We are worried it won’t fit together. But in living who God has made me to be, I believe that that is an encouragement to others no to look a certain way or “fit in” – but to let God assemble all the parts he has placed perfectly within them, and let the rest sort itself out.

SW: How important do you think conferences such as Captivated are for women?
RK: I read a quote that changed my life: “We need to rediscover the power of secret sisterhood”. As women, we might be afraid of being pigeon-holed or condescended to if we meet together in case it makes us “seem” a certain way. But actually, sisterhood is something unique and special that God gives us within the body of Christ! We have a hundred other relationships with children and men that are wonderful, but the dynamic changes when we allow women’s stories to be told, uninterrupted and unhindered once in a while.

SW: What message would you like to leave with the women that you met at these conferences – and beyond?
RK: You are a persister in the faith – a perSISTER – a woman who will endure to the end. Don’t let Satan muddy the waters of your story, or steal your voice. God has created you for worship and praise, and you are a warrior.

SW: As you know, The Salvation Army in Australia is focusing on gender equality. Why do you think this is important?
RK: The Stradivarius are the world’s most valuable violins, because they were made by a master who crafted them with great skill. Women and men are made together in God’s image, and it’s up to us to recognise, affirm and speak out about that craftsmanship. Societies all around the world still privilege men over women, ignoring barriers and issues – religiously, sexually, educationally and economically – that hamstrings us so we can’t “run the race with endurance”. The Salvation Army had Catherine Booth as the main proponent of women’s equality in our early stages – but equality is like blowing a balloon up ... if you stop blowing, the momentum leaks out. We need to continue to advocate wherever there is hardship and injustice! And if we can diagnose heaps of injustice at once, by recognising male-dominated institutions are wreaking havoc on over half the world – we should suit up and do battle. Jesus doesn’t call us to just wait it out like on the decks of the Titanic, then just beam up to heaven and the great beyond – he calls us to bring heaven to earth. That’s how people know where we are from and where we are going, because we carry the culture of heaven – not just a “slightly-better earth”. We’re an Army, not a café. Let’s not break bread with injustice.

SW: What are some of the major barriers you see to gender equality, and what can be done to help break them down?
RK: “For the kingdom of God is not a matter of talk but of power” (1 Corinthians 4:20). Honestly? Not believing in women is the major barrier we are facing today. We need to believe women are capable, that they are valuable and we need to affirm that we hear them. God will prick our hearts to act locally and effect change globally if we listen. Jesus calls us to value women in the body of believers with everything we do – otherwise the body has had a stroke, and will be no good to anyone.

SW: You recently wrote an article “Redressing the Balance”. What do you think The Salvation Army, women, and men, need to do to redress the balance?
RK: This is hard. It wasn’t until I began researching in my role in Women’s Ministries that I was given the language to name the sexism, sexual assault and bias I had experienced in my life because I was a woman. Much of the brutality and injustice we experience as women is normalised. We think “Well, that’s just the territory that goes with being a woman”. But I say – you know what a hippy commune looks like, right? You know how it smells, probably how they live, what they wear, what they grow and eat? So what does a Christian community look like? How do we live, breath and eat that sets us apart? Isn’t it Christ, and Christ resurrected in everything we do? If the world exploits women and children, and sees us as the bottom of the food chain – then what does our Christian commune/community do so differently, that Jesus did? Men, how do you see women? Women, how do you see women? We need to make sure that the whole priesthood is being built up as we worship together, and that it is all rooted and established in our understanding of God as the Creator, King, Equipper and Saviour of us all. “Wherever there is hardship or injustice, Salvos will live, love and fight alongside others” – brick by brick, building the kingdom with our sisters and brothers – “to transform Australia one life at a time with the love of Jesus”.