You are here: Home › Features › Remembering The Fallen At 11am on the 11th day of the 11th month of 1918, World War One ended. Earlier that morning, Germany, facing imminent invasion, signed an armistice agreement with the Allies (Britain, France, Russia) outside Compiegne, France. 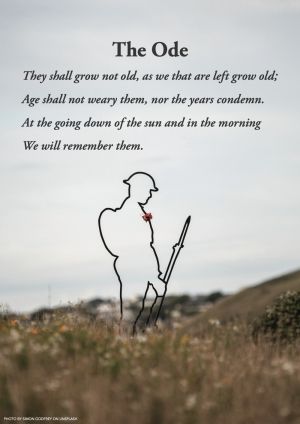 This day is known as Armistice Day or Remembrance Day and is commemorated on 11 November in many of the 100 countries around the world that fought in WWI.

In a letter published in the London Evening News on 8 May 1919, an Australian journalist, Edward George Honey, proposed a respectful silence to remember those who had given their lives in the ‘Great War’. This was brought to the attention of King George V and, on 7 November 1919, the King issued a proclamation calling for a two-minute silence: “All locomotion should cease, so that, in perfect stillness, the thoughts of everyone may be concentrated on reverent remembrance of the glorious dead.”

In Australia in 1997, then governor-general Sir William Deane issued a proclamation formally declaring 11 November to be Remembrance Day, urging all Australians to observe one-minute’s silence at 11 am on 11 November each year to remember those who died or suffered for Australia’s cause in all wars and armed conflicts.

Major Brett Gallagher is Chief Commissioner of The Salvation Army Red Shield Defence Services (RSDS), representing the men and women who live and work with Australia’s defence personnel and support them in their time of need. Whether in barracks, out in the field or while serving overseas, the ‘Sallyman’ or ‘Sallyma’am’, as these Salvo representatives are affectionately known, have provided comfort and ministered practically and spiritually to soldiers in different conflicts around the world for 120 years.

“Remembrance Day is one of those important times when we get together, remember those who have died in all conflicts and give thanks to God for the sacrifices they made,” says Brett. “The day ultimately impacts all people – all cultures and faiths. Hopefully we can remember what happened in those days and times, so we don’t get to the same point in our world again. Wars, tragically, have continued, so we need to keep stopping, pausing, reflecting and doing what we can to prevent them.”

Brett says that, sadly, the significance of Remembrance Day has diminished somewhat in recent years.

“This happened to Anzac Day several years ago, and there was a big push to lift the profile of the day,” he explains. “Of course, Anzac Day has an Australian focus, whereas Remembrance Day is worldwide, which can make it more distant.

“It used to be that people would stop what they would be doing at the 11th hour, cars would pull off the road, and whole communities would stop for that minute of silence. Growing up, that meant something to me. Now, it’s often just business as usual as we rush about our day.

“I hope that Remembrance Day will get a profile push as Anzac Day did and that it can have more prominence in our way of thinking, in our calendars and in our media coverage.”

This year, the traditional Remembrance Day service at the Australian War Memorial in Canberra will go ahead, but with limited attendance due to the COVID-19 pandemic. Other commemorations and events will be strictly limited or cancelled.

Brett is encouraging Australians to stop at the 11th hour, to be still, and to remember. “Just like so many people did on their driveways, with candles, on Anzac Day, let’s create that atmosphere of remembering, of reflecting, of being grateful.”

In a ‘normal’ year, RSDS representatives would pause with their units, in whatever they were doing at the time, and observe a minute’s silence. Significant commemorations would also take place within the barracks, on the base, or in the field – both in Australia and overseas. Some Salvo churches, such as in Tuggeranong (ACT), also run ‘Defence Sunday’ services on the Sunday before Remembrance Day.

“I will be leading a Remembrance Day service at a Salvation Army aged care home in Canberra,” says Brett. “I will also be letting people know that, even though our soldiers are well looked after, many still face some tough issues as they work in challenging situations away from their families. Even when they leave the defence forces, soldiers are twice as likely to end their lives than others in the community, and for female soldiers, this rate is even higher. Building close and supportive relationships is critical to reducing this terrible statistic.

“The RSDS is still supporting soldiers around the country as best as we can, and where we can. It’s mostly one-on-one, with social-distancing measures in place, but we are able to maintain what we need to do in terms of meeting the needs of servicemen and women.”