Darwin city centre on Christmas Day 1974 in the wake of Cyclone Tracy.

Others writer Jessica Morris pieces together the story of her family as they recall their experiences of surviving Cyclone Tracy, which tore through the Top End of Australia in 1974

In 1974, my family had two Christmas guests – Commissioner Harry Warren, leader of The Salvation Army Southern Territory, and Cyclone Tracy, the devastating cyclone that ripped their city apart.

History shows that the cyclone took 71 lives, 30,000 people lost their homes and the damage bill was $837 million. But the tragedy has recently become a little more personal.

Since I was a child, this event has been Morris family folklore – the story of how my family, and The Salvation Army, survived a then unprecedented natural disaster and lost everything but each other.

Forty-five years after Cyclone Tracy displaced my family, I have asked some of them to tell me the story again. Others writer Jessica Morris (left) with her aunt Valerie and grandmother Wilga.

Gathered around a table with me are my grandma Wilga Morris and three of her four children – Winsome, Valerie and Duncan (my father). At the time of the cyclone, my grandparents (Majors Hilton and Wilga Morris) were The Salvation Army’s flying padres in the Top End.

Tears well up as Wilga recalls the moment Commissioner Warren arrived to take control of The Salvation Army’s emergency response.

“It was Boxing Day, and we were in the city with the Darwin Corps Officers, Majors Alan and Margaret Walker, trying to figure out what to do next,” she says. 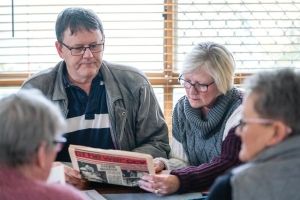 “Then we saw this man [Commissioner Warren] get out of this car, and he just came and put his arms around us.

I still get emotional about it.”

Under Commissioner Warren’s direction, The Salvation Army was one of the first response teams on the ground after Tracy hit.

The story is told that Commissioner Warren “hitchhiked to the apocalyptic zone”, and began working with the Army’s two officer couples – the Morrises and the Walkers.

Corps members and families came out to join them and the relief effort began.

As the song says, ‘Santa never made it into Darwin’ that year, but the Salvos did, and they made their presence felt. My grandfather [Hilton] was promoted to glory in 2014, and Wilga now carries the legacy of their role in the relief efforts.

I ask my family what it was like on the night the cyclone hit – Tuesday 24 December, Christmas Eve. They recall gathering in the corner of their kitchen, along with their oldest brother Brian, two cousins and the dog. 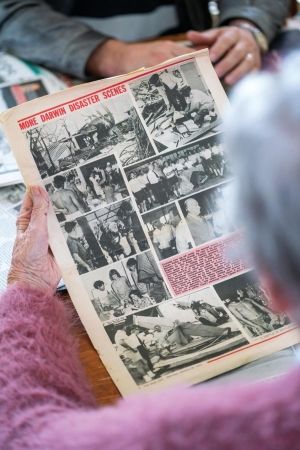 Wilga peruses a page of photos in an old War Cry newspaper.

For six hours they huddled together near the refrigerator, shivering as they sang choruses.

Hilton monitored the wind strength using an old car mattress, and we laugh when someone realises the family still uses it today.

“We ran into the kitchen as the house began falling apart, and I remember Mum saying, ‘We need to talk to Jesus’,” recalls Winsome (now Lieut-Colonel Winsome Merrett, Australia Territory Assistant Chief Secretary).

“As soon as the name of Jesus was said, this enormous peace just came over me. As a result of Cyclone Tracy, I always believe that God is intimately involved in the lives of his people.”

The details about that night go from terrifying to miraculous. Winsome tells me about the tree that went through the girls’ room seconds after they ran downstairs.

Valerie mentions how two potential shelters for the family – the caravan and stairs – were blown away while their corner of the kitchen remained standing.

And Duncan tells me how a large piece of Masonite literally followed his brother Brian into the kitchen, sheltering them from 240km/h winds. The Morris family emerged from the wreckage of their home at 6.30am on Christmas Day.

More than 70 per cent of Darwin’s buildings were flattened. There was no electricity, sanitation or clean water. Instead of caring for their own needs, the Morris family realised there was greater need – the city’s residents needed the Salvos.

Painting the word ‘SALVO’ haphazardly on the side of their car, they set up a point of operation at fellow Salvationists Ruth and Graham White’s place.

With the lower storey of their house still standing, it became a safe haven and focal point for the community. Ever the handyman, Hilton managed to get the car radio to work and locals gathered around the vehicle, listening to their only point of communication with the outside world.

The little group of Salvos did what they could on Christmas Day, then headed into the city on Boxing Day to see what remained of The Salvation Army corps hall. That’s when Commissioner Warren pulled up at the curb.

“Thankfully, by God’s grace and the generosity of the community, help came quickly after that,” says one of my family members.

In the following days, the Salvos would acquire a donated rolling kitchen and start distributing food, clothes and water to hundreds of people. One of the first buildings to rise from the devastation was a warehouse for the Salvos to conduct their operations – and Sunday meetings also resumed.

“Some people have said that when the hall went, they thought there’d be no more Salvos in Darwin,” says Valerie. “But people had no idea of the impact of the Army up there. In fact, that’s when we became more active than ever.”

I ask Wilga how she prioritised helping others and her family at the same time, and she is matter of fact. “Oh well, we had survived. And they were friends with all the other kids – they got busy [helping people], same as Hilton and I did,” she says. Winsome adds, “We had a shared purpose because we had a shared experience.”

The Morris family was welcomed into the home of Ruth and Graham White, who also had four children.

The Whites worked for the Uniting Church, but had been enrolled as senior soldiers of The Salvation Army the Sunday before Cyclone Tracy struck.

A unique community spirit developed throughout 1975 as more families linked with The Salvation Army, and a thriving Corps Cadet program was established.

Seven Corps Cadets from this time would go on to become Salvation Army officers, with some even returning to the Top End for their own appointments.

Furthermore, it’s fair to say that the cyclone facilitated the development of the Army’s social work in Darwin. The Red Shield Hostel was soon built – the meeting point for Valerie and my late uncle John Barker.

And once Hilton’s plane was replaced, the flying padre service was back in operation. The disaster experience also stood the Morris family in good stead.

Years later, when Hilton and Wilga were serving as corps officers in Geelong, they headed relief efforts during Ash Wednesday [16 February 1983].

In 2000, they were awarded the Order of Australia in recognition of their work. This seems peripheral in comparison to what I experience with my family today.

And I realise the real fruit of their obedience is the healing and connection that takes place at the table in front of me. Wilga sums it up by saying: “God said to me after the cyclone, ‘Don’t you worry about what you’ve lost. You will have more than you’ve ever had in your life’ and that’s just what happened.”

And in true Morris fashion, it ends in laughter: “It’s true,” says Winsome. “We were given a dishwasher after that!”

Jessica Morris is a staff writter for Others.