You are here: Home › Features › Salvation Army To Celebrate 60 Years In Png 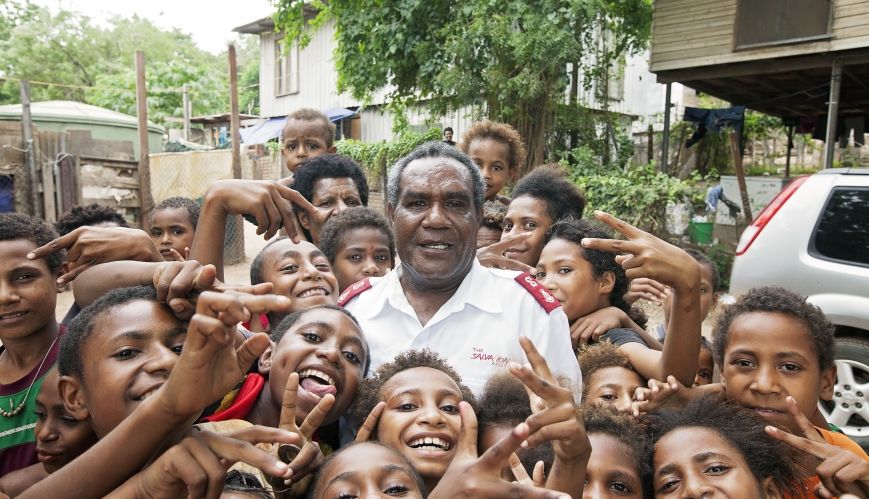 Salvationists from the small Papua New Guinea town of Popondetta will walk for up to six days to attend the 60th anniversary of The Salvation Army’s work in Australia’s closet neighbouring country. They will be among thousands of PNG Salvationists, complemented by a smaller group of Australians, who will gather in Goroka from 23-26 June and then in PNG’s capital, Port Moresby, from 26-28 June to celebrate the milestone.

The Salvation Army’s world leader, General André Cox, and Commissioner Silvia Cox, World President of Women’s Ministries, will travel from London to be the special guests at the historic celebrations. Many local Salvationists will also make long journeys to attend the congress, with some travelling via canoe or catching a crowded Public Vehicle (an open-sided three-tonne truck).

The northern congress will host open-air meetings at Goroka’s National Park, while the southern congress will be held at the Roy Bungay Memorial Hall at the Army’s territorial headquarters in Boroko, Port Moresby. Songs of praises will be sung in various languages as Salvationists and soldiers arrive and begin to pitch their tents. Musical items are being prepared by local Salvationists for the official celebrations and a march of witness will take place at both congresses.

“There is a real sense of celebrating our God who is continuing to transform lives because of the mission and ministry of faithful Salvationists over the last 60 years,” said Major Heather Unicomb, an Australia Eastern Territory officer who is the PNG Territory’s Assistant Secretary for Program. “There is an amazing bond on the spiritual level between the Australia Eastern Territory and Papua New Guinea.”

Ministry in PNG has always been close to the hearts of many Australia Eastern Territory officers. Pioneer officers from the Eastern Territory, then-Majors Keith and Edna Baker, officially began the Army’s work in PNG in 1956. When he first set foot on PNG soil, Major Baker declared: “God give me PNG or I die.” Salvation Army ministry began with a meeting at Kila Kila Barracks on 21 October 1956. A short time later, PNG celebrated its first Salvation Army soldier, a young student named Kei Geo. The ministry continued to grow, spreading throughout the country and meeting needs such as education and medical services. PNG officially became its own command in 1994, and then in December 2000 was elevated to territory status, although continuing its strong ties to the Australia Eastern Territory. More than 350 Australian officers have served in PNG over the past 60 years.

The Army’s NSW and ACT Divisional Commander, Lieutenant-Colonel Miriam Gluyas, spent three years serving in PNG as its chief secretary. “My prayer would be that they will rise up and see all that God has for them,” said Lieut-Colonel Gluyas. “That they will live like Jesus and for Jesus, and live and walk in personal freedom, in a safe nation, and in the total freedom of Christ.”

Lieut-Colonels Kelvin and Julie Alley, Australia Eastern officers currently serving in PNG, echo these sentiments. “I have been able to visit many health centres and posts in PNG,” said Lieut-Colonel Julie Alley, Territorial Director of Health Services and Territorial Secretary for Women’s Ministries in PNG. “It is so rewarding to see the extent to which The Salvation Army is a vital and essential part in the health and community life of the ordinary person living in the villages of Papua New Guinea.”

Lieut-Colonel Kevin Alley, PNG Territory Chief Secretary, added: “It is my desire to see the territory become self-sustaining financially and for the Lord to bring a generation of officers through to leadership within their own territory, and for PNG Salvationists to capture afresh the joys of discipleship in order for The Salvation Army in this country to be a vital force for good and for godliness, making a difference to the lives of the people of Papua New Guinea.”