You are here: Home › Features › Salvationists Open Doors To Hope In Hong Kong 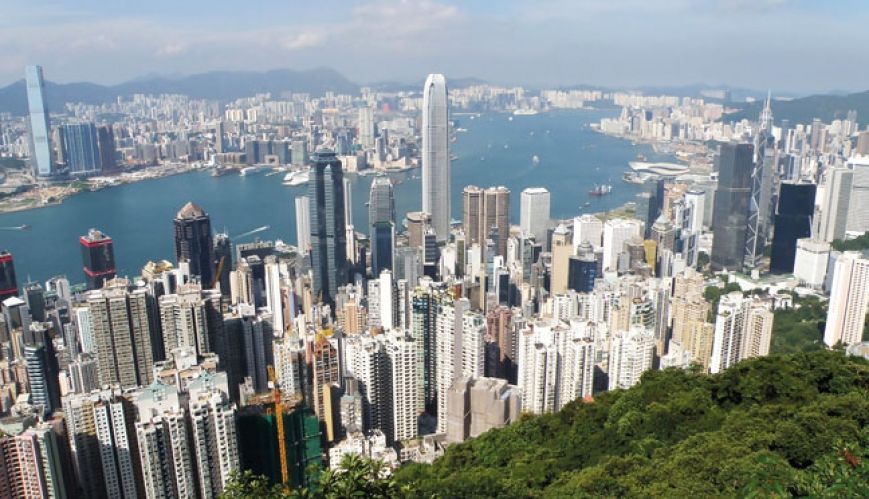 The Salvation Army continues to make its mark in Hong Kong, through supporting local needy communities.

I left Hong Kong with the words of Lieutenant-Colonel Ian Swan (Officer Commanding, Hong Kong and Macau Command) playing over in my mind. “Don’t let anyone tell you The Salvation Army isn’t in China – it is, because Hong Kong is part of China.”

Strictly speaking it’s an autonomous “Special Administrative Region of the People’s Republic of China”, but the lieut-colonel is right –The Salvation Army in Hong Kong, with its churches and wide-ranging social provision, is part of China and has been since the British government handed over the reins in 1997. The vision of The Salvation Army’s founder, William Booth, that the Army would have a ministry in this huge country, is still being fulfilled 100 years after the first Army ministry took place there.

Hong Kong is remarkable in so many ways – a tip of rocky outcrop on the edge of a massive landmass, a meeting of traditional British, Chinese and the sleek, ultra-modern. For a first-time visitor like me, it was unexpectedly beautiful, with a regular sea view or green mountains forming a contrast to endless high-rise buildings. The built-up and the natural sit side-by-side in surprising harmony.

Of course, Lieut-Colonel Swan knows that Hong Kong isn’t the same as mainland China. The Salvation Army engages in community work and emergency responses on the mainland, but they look different to what takes place in Hong Kong. Relationships with the Chinese government are friendly, but there are still limits on what can happen. You won’t see evangelism or church gatherings organised by The Salvation Army on the mainland. Instead, the Army has become a valuable partner in providing emergency and development services, demonstrating the love of God through actions.

Back in Hong Kong, where The Salvation Army has been active since 1930, the work continues to expand and cope with the changing face of this Special Administrative Region.

On Lantau Island, hundreds of high-rise apartment buildings have been constructed in the past decade. At the heart of the Yat Tung Estate, in Tung Chung, is The Salvation Army’s Lam Butt Chung Memorial School – nestled in the heart of tall buildings like a small child among a sea of adults.

The area is quite deprived. The apartment blocks are not old, but they are already looking tatty around the edges. The community is too far from downtown to make commuting viable but too new to have created its own areas of employment. Many of the families who come to Hong Kong from the mainland are settled here, with a large number unable to work while their papers are processed.

In many communities like this, the sense of deprivation and uncertainty translates into desperation and difficulty in the school system, but not at the Lam Butt Chung Memorial School. The principal, Daniel Lo, who is a Salvationist, beams with pride as he shows us around the school. It may not be ostentatious, but it is smart and well cared for, and the children show obvious respect not only for their surroundings but also to each other and to their teachers.

The school has around 700 pupils, ranging in age from six to 12. There are around 25 children per class, allowing for a high quality of education.

It is open to application for children of any faith, or none, but it makes no effort to mask its Christian values and background. Everywhere you go through the school, on almost every wall and stairwell, there are illustrations from the Bible, from creation and Noah’s Ark through to Jesus’ earthly ministry.

Envoy Simon Wong (Community Relations Director), who has worked for The Salvation Army for many years, explains that, although less than 10 per cent of Hong Kong is Christian, almost all the top schools are run by Christian organisations.

Lo feels that the Christian underpinning brings extra responsibility to his school. “How can you says ‘Jesus loves you’ if you’re not loving your student by teaching him or her well?” he asks.

Results are positive, with the pupils achieving grades that are well above the average expected in such a low-income area. 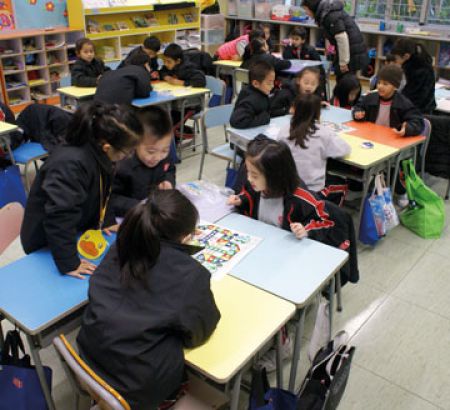 The emphasis is very much on teaching the child while working with the family. Lo shows us a selection of small rooms, barely more than cupboards, each of which is almost filled by an upright piano. These are rehearsal rooms, where children learning the piano can come to practise. There is little or no chance that they would have a piano in their homes. Lo explains that the school has a strong tradition of music, with its handbell groups receiving recognition locally and overseas.

Walking through the school, there is a clear sense of community. It’s approaching Chinese New Year, so special classes are taking place. In the main hall, children are learning the traditions and approach of Chinese opera. In classrooms, some children are working on ideas of how they would transform unused parking space into a facility that would be useful for local elderly people. The program has included time going out into the community to speak with people in order to understand their needs.

Another classroom sees some of the youngest children learning traditional board games while, a few yards away, a class is shown 3D-modelling techniques in the computer lab.

From the school we are taken across the estate by Major Agatha Wong, one of the corps officers. She is the meeting point for the different ministries, linking the school and its children with the rest of the people in this community – and working alongside The Salvation Army’s Tung Chung Family Support Centre, which operates from a modest office five minutes’ walk from the school.

When we arrive at the centre, a group of women is gathered in the meeting room. The table in front of them is covered in craft materials and they are making decorations for Chinese New Year. We learn that, for many of these women, this will be their only social interaction while their children are at school.

This goes to the heart of what the family support centre is doing – providing social links so people look after each other, even if they are no longer surrounded by their wider family.

The social workers we meet paint a bleak picture. People in Tung Chung lack external support. They are isolated because of the distance to Kowloon, where most of the jobs are, and many people in the area are among the 150 a day from mainland China who are coming to live in Hong Kong as part of a government program (around 55,000 a year) every year for the foreseeable future.

There are many difficulties that arise with this flood of new people. Language is one barrier, with newcomers speaking Mandarin rather than Cantonese. Some arrive as single parents with children, meaning it is very difficult to form social bonds outside the home.

We learn that there is a particular problem with old men from Hong Kong seeking young marriage partners from mainland Chinese villages, some with a 50-year age gap or more. What happens when the young women have children causes a variety of issues. Sometimes the father becomes ill or even dies, leaving a young single mother in an unfamiliar location with no family support. In other instances, the young wife gets her residency papers and then leaves her elderly husband, meaning that – at an age when he struggles to look after himself – he then has to find a way to bring up their children.

The family support centre seeks out situations like this, offering practical and emotional support. Their figures show that they have reached about 1000 families in Tung Chung – and they emphasise that they mainly work with families rather than individuals.

When they have worked successfully with people, usually after a year, the support team encourages them to become mentors, helping others in their community. One person who had computer maintenance skills now helps other families on the estate. Others receive training in hairdressing and then offer their skills in a local elderly-care centre. One of the social workers explains: “They find strengths they never knew they had!”

The emphasis is on bringing people together and improving lives so a support network can be built across the community. Elderly people are mobilised to be part of the community, and parents are taught how to look after their children more successfully.

“After five years,” we are told, “family cohesiveness has risen by 50 per cent.” Parent-child relationships are improving and there is better communication between the generations.

The centre receives generous support from the Jockey Club of Hong Kong and a funding organisation called The Community Chest. Some of the funding is coming to an end, leaving doubts about how much of the program will continue. There’s no doubt that the need is great – and likely to become greater. More than 100,000 people are expected to move into the nearby area in the next few years, and that’s without considering the implications of the Pearl River Delta “mega-city” planned by the Chinese government, which will eventually be accessed by a new bridge from Hong Kong. The mega-city, made up from the urbanisation of land between five cities, has grown from a mostly rural population of 27 million in 2000 to more than 58 million people today (just less than the populations of the United Kingdom or Italy) with projections showing that this could grow to more than 200 million in the next decade or so.

No one quite knows how this will affect Hong Kong, but it is likely that the problems being addressed at the family centre in Tung Chung will become more common.

The Salvation Army’s Hong Kong and Macau Command is making every effort to be prepared for the changes that will come in this “Special” part of China and on the mainland. In the meantime, the interaction between school, corps and family centre that I saw in Tung Chung continues to be a good model.

And, as the school’s brochure makes clear, this ministry is all done in the name of Jesus: “Our school community,” says the school vision, “in sharing the love and truth of Jesus Christ, will grow in knowledge, maturity and care for others, especially those with greatest needs.”

The Salvation Army in Hong Kong

The Salvation Army began its ministry in Hong Kong in March 1930, following a request via Government House to start women’s work. Majors Dorothy Brazier and Doris Lemon opened a home for women and girls in Kowloon, with the work overseen from Peking (today known as Beijing). A headquarters was established in Hong Kong in 1951.

During World War Two, Hong Kong was occupied by Japanese forces and all Salvation Army work had to close. All, that is, except the Kwai Chung Girls’ Home which, according to The Salvation Army’s official history, remained open “thanks to the heroic resourcefulness of Major Brazier, based upon her own faith in the protecting love of God.”

The command oversees 33 nurseries and schools, offering care and quality education to more than 7000 children. The 80 social services units assist more than 579,000 people a year.

Because of this huge amount of social and schools ministry, the command has almost as many employees as senior soldiers – 2411. The China development office in Hong Kong oversees two offices in mainland China, through which a wide variety of development and disaster relief projects are organised.

Article originally published in All the World magazine.