You are here: Home › Features › Saved At Sunday School James Singer says he has always had a heart for the marginalised, which he can now utilise for God as part of The Salvation Army. Photo courtesy of Kyabram Free Press

Aged 32 and sitting in Sunday school with his three small children, James Singer heard for the first time an invitation to have a special friend.

The invitation was intriguing for James. He had never had a special friend. He had had a few friends but wasn’t really close to anybody, in particular. He was raised in what he says was a dysfunctional family. His family moved seven times in James’ first 15 years. He didn’t have time to make friends. Nobody got close to him; he didn’t let them. It was his way of dealing with the life forced upon him.

“I don’t think I was a bad kid,” he says. “I did push the boundaries. I was unsettled. I was no angel. But, some- how, I was able to keep clear of the law, more by good luck than good management.”

Early adult life had its ‘moments’. James now prefers to dwell on the positives rather than the negatives of life. By the time he was 32, he was, he says, a “dry alcoholic”, had lost a business and was trying to pay off debts and back taxes.

James defines a dry alcoholic as a person who doesn’t drink alcohol but displays the behaviours of an alcoholic. A recovering alcoholic, he says, is a person who is recovering physically, mentally and spiritually from alcoholism, but has not yet fully recovered and may never be fully free of the grip of alcoholism.

Finding his ‘special friend’ at 32 changed his life, dramatically.

James has two adult sons and a granddaughter from a previous marriage. During that marriage, a step-daughter had a sleepover with a friend. The friend attended Sunday school at The Salvation Army at Queanbeyan, on the NSW-ACT border.

When his step-daughter returned from the sleepover, she asked her mother if she could go to the Sunday school. Her mother told her to ask her father (James). “I told her that I had never had anything to do with religion and that I didn’t care [whether she went or not],” James says. 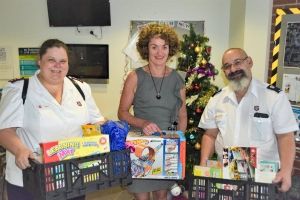 “Anyway, I started dropping her off and picking her up at Sunday school. Next thing, I also took a second step-daughter and my son, who were then both pre-school age. Someone at the Salvos said it was okay for me to take them, but that I would have to stay to help look after them. So, there I was, sitting up the back in Sunday school looking after my little kids.

“After a few months of doing this, the Sunday school teacher asked the children if they would like to invite Jesus to come into their life and be their special friend. Well, I thought, ‘gee I could do with a special friend.’

My life was pretty rubbish. So, I prayed the prayer of accepting Jesus as my special friend with all of the other kids, unbeknown to the Sunday school teacher.

“A few weeks later, one of the women at church, a nice, little, traditional Salvo lady, in full uniform, asked me where I was up to in my walk with Jesus. Because I was a very rough bloke, at the time, I probably used a few swear words enquiring about what she meant by my ‘walk with Jesus’.

“She taught me about Jesus, showed me how to read the Bible and how to pray. She told me that I was actually saved. She taught me the absolute basics of being a Christian and the fact that, actually, somebody really, really loved and cared for me.”

From there, James got involved with the church and found the acceptance and friendships he hadn’t known growing up and didn’t feel he deserved. As he grew in his friendship with Christ, he considered Salvation Army officership. But it never quite worked out for a, by then, single father of two boys.

A few years ago, while serving as a soldier at Moonee Valley Corps in Melbourne, he found another friend in the Assistant Corps Officer, Lieutenant Taryn Castles. Taryn says she was initially attracted to James when she discovered that he was willing to surrender a good career in Canberra to move to Melbourne so that one of his sons could study at the National Institute of Circus Art. “James is a character – a character with integrity,” she says.

They married three years ago and James became an auxiliary-lieutenant 18 months ago. Now, he is Corps Officer at Kyabram Corps, in northern Victoria. Taryn is a Project Officer (Mission) at Territorial Headquarters in Melbourne, researching the effect of COVID-19 on Salvation Army social programs.

And James now has more friends than he ever imagined.

“No, I’m not surprised, in a way, that I am where I am today,” he says. “Yes, I had a tough life and I was a tough person. But I have always had a heart for the marginalised in society. They are the people The Salvation Army looks out for. It’s who I am.”