You are here: Home › Features › Seeing Jesus In Rio

In August and September, millions of people will flock to Rio de Janeiro in Brazil for the first Olympic and Paralympic Games to be held in South America.

My route to The Salvation Army’s divisional headquarters in Rio de Janeiro involves a stroll along the warm sands of the world-famous Copacabana Beach, which will be the venue for the beach volleyball contests at the 2016 Olympic Games, before embarking on the bustling Rio Metrô, on which the TV screens alternate between adverts for McDonald’s, the James Bond film Spectre and … The Salvation Army. Finally, it’s a quick taxi ride past the massive Maracanã Stadium that will host the Rio 2016 opening and closing ceremonies. Even on this relatively short journey, the dichotomy of rich and poor is pronounced – there are bright, shiny boutique stores and then there's people sleeping rough along the shoreline.

I’m here to meet Major Dan Ford, The Salvation Army’s divisional commander for Rio de Janeiro, Minas Gerais and Federal District, responsible for the 10 corps and three social service centres that serve this eclectic city’s 6.3 million residents. Also accountable for The Salvation Army’s mission teams during Rio 2016, he is affable, welcoming and enthusiastic about the potential of the Olympics. “It’s a great opportunity to talk about our faith,” he says. “To show The Salvation Army in Brazil to a worldwide audience, to show them where our heart is. And locally, we need to put The Salvation Army on the map.”

Brazil’s distinctive auriverde flag flies proudly across the city. But Major Ford observes that its Portuguese slogan “Ordem e Progresso” (Order and Progress) is conflicted. “Rio is progressing,” he concedes, “but not necessarily in the right direction.” He explains that “many parts of the city are affluent and well-to-do, but there is a gulf between rich and poor, a prevailing ‘anything goes’ attitude and a marked lack of generosity towards the more vulnerable members of the community”.

He speaks warmly of Brazilian Salvationists’ profound desire to serve on mission teams while their city is in the spotlight of the world’s media. “It’s not so much what they are going to do, but the fact that they are prepared to do something,” the Major Ford continues. “In particular, we’re aware of estimates that up to 40,000 sex workers will ply their trade in Rio during the event. Salvationists here have a real heart for those trapped in the sex trade, and are campaigning against human trafficking.” Lunchtime at The Salvation Army’s Méier centre in Rio.

An initiative in the suburb of Niterói is already ministering to local women engaged in prostitution, offering non-judgmental counselling, refreshments and care packages. Vânia Quintão is a Salvationist from Niterói who is keen to be participating in August’s mission. She was part of similar outreach campaigns at the Pan-American Games in 2007 and at a number of Rio’s famous carnivals.

“I am looking forward to the arrival of the Olympic Games and being part of this great team of volunteers,” she says. “I believe [this] is a strategic way ... to fulfil our mission as The Salvation Army.” Elisa Moura, also from Niterói, agrees: “To the vendors, people coming in and out of sports events, and the street people we can show Jesus.”

Meanwhile, international mission teams are also being deployed, with the intention of developing sports ministry programs in and around Rio’s Salvation Army corps and centres. In partnership with Brazilian parachurch movement Braços Abertos (Open Arms), these teams are being brought together by Lieutenant-Colonel David Bowles, Europe Zone Sports Ministry Coordinator. He aims to build on similar initiatives undertaken in Brazil during the 2014 football World Cup and in the UK during the London 2012 Olympic Games.

He outlines the rationale: “Sports ministry is important because it builds bridges and transcends language and culture – a shared passion that can be the first steps to forming real relationships. It’s a great leveller; people can participate in sport regardless of social status, background or ability. The fun, excitement and discipline of sport has much in common with our faith experience – it’s a natural springboard to meaningful and life-changing conversations about Jesus.”

Linn Tabita Milde belongs to The Salvation Army in Ås, Norway, and describes the chance to get involved in the Rio 2016 mission team as a “unique opportunity”. She continues: “I know this will strengthen and develop my relationship with Jesus! [It] will challenge me in sharing the gospel with others.” Fellow team member Vetle Jarandsen, from Oslo, echoes Linn’s sentiment: “I want to be Jesus’ hands and feet ... to experience a new culture and discover how church works in a poorer community.” 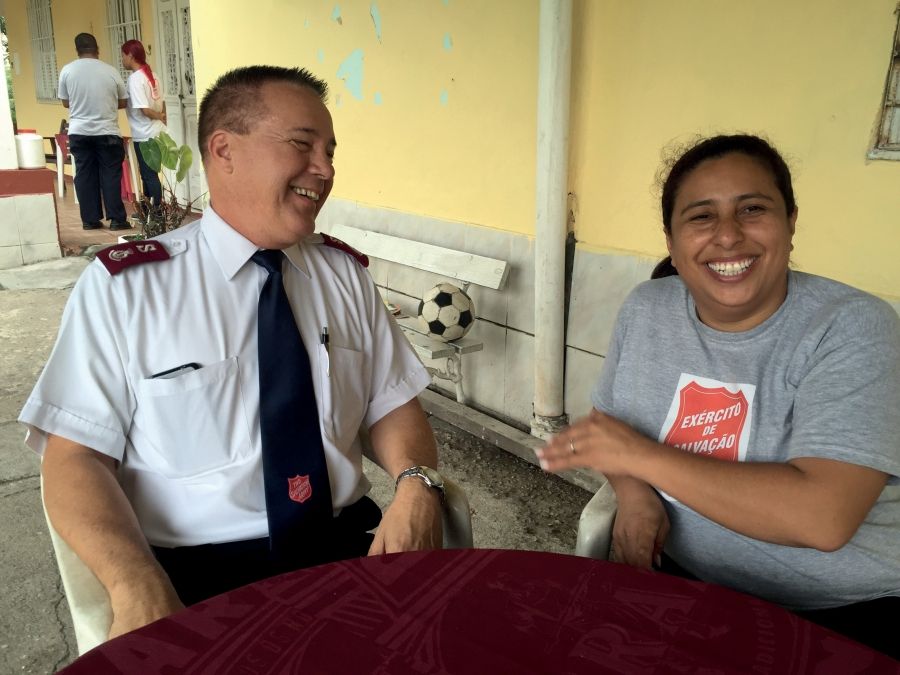 In fact, several of The Salvation Army’s corps and centres in Rio are already using sport and other forms of recreation as a way to cement meaningful relationships in the community. Captain Ionara Tebas is the corps officer and centre manager at Méier, which has established itself well in the community. “It’s a case of visiting the people who might need our help,” she explains. “We go to them and get to know the whole family.” Some of the families Captain Tebas is in contact with have significant needs; alcohol and drug dependency is widespread, with a serious knock-on effect on family income.

The cornerstone of the Méier Corps ministry is its provision of care to children. Every day, between 50 to 60 under 18s arrive at the centre for lunch and remain for the afternoon. Activities are varied – The Salvation Army works with the local authorities to provide additional teaching, but there are also opportunities for art and craft, letting off steam on the all-purpose sports pitch and getting groovy in the centre’s dance studio!

There is delight on the children’s faces as they perform impossible manoeuvres on the climbing frame and effortlessly kick a football around in the 30-degree heat. “I love the dance workshops and learning Portuguese,” enthuses 15-year-old Tamiris. It makes her want to go back to the Méier centre every day and recommend it to her friends. And perhaps more pertinently: “It’s pretty cool!”

Attendance for worship here is gradually growing, with about 30 locals regularly turning up for Sunday morning meetings. In common with most of the corps in Rio, worship is vibrant, with a Latin American samba vibe featuring alongside Bible teaching and prayer! The Army is well regarded by the city government, with the leader Vereador Eliseu Kessler – himself a Christian – honouring The Salvation Army’s 150th anniversary with a civic reception last November. Corps officers and many long-serving Salvationists were thanked for their efforts with official certificates of recognition.

While many big cities have areas of social deprivation, the slumlike favelas of Rio are especially prominent because of their hillside locations. Again, The Salvation Army is at work, providing hope to the hopeless. Projeto Integração serves vulnerable families in the Divinéia favela, offering a place of safety for around 50 children each weekday. At the stroke of two o’clock, children stream in through the open doors. 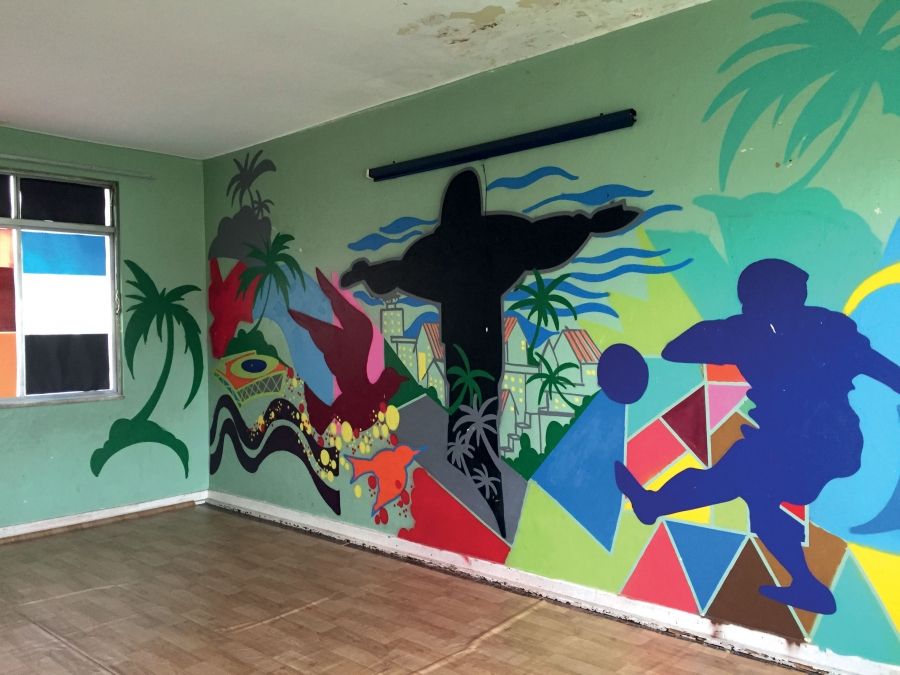 At this centre, serving can be as simple as offering a cup of clean drinking water or providing a mattress for a child to have a much-needed nap. Soon, the place is abuzz with young people catching up on each other’s news, exchanging banter with the staff and tucking into a hot meal. The rest of the day could include games or further study, depending on the child’s age, with the option of Bible stories, singing or painting. The centre also has an IT suite, to provide training in valuable technological skills.

“With drug dealing and gun crime rife,” adds Major Ford, “the favela is not a safe place for children to go home to an empty house.” He starts to talk again about the holistic nature of caring for the entire family but, as if to underscore his assertion about the dangerous nature of the place, a police patrol car with machine guns pointing out of its windows passes by slowly as we return to his vehicle.

Rio is, of course, renowned for the 38m-high Cristo Redentor (Christ the Redeemer) statue that towers over the city on the top of Mount Corcovado. Thousands of tourists every day make the decision to trek up the mountain paths (or take the less energetic option of a train) to the summit. In a city that needs salvation, it’s an interesting juxtaposition that so many people swarm to see Jesus – or, at least, a reinforced concrete-fashioned version of him! It’s a spectacular sight by day and – impressively floodlit – by night.

Will visitors to Rio 2016 “see Jesus”? Through their various ministries, Salvationists and mission partners certainly intend that they will.

This article appears courtesy of All The World.