You are here: Home › Features › The Good Soil Mark Hadley asks "Is it any wonder millennials struggle to grow hope, when there’s nothing certain to plant it in?"

My 10-year-old has smiled since the day he was born. He loves his mother dearly and he loves to make his father laugh. Daily, he devotes himself to drawing in a way that is as creative as it is unconscious. I don’t think he has the faintest idea how individual or impressive those pictures are. And, so you know I’m not just another myopic parent, I’ll include a couple in this article for you to appraise. But as you view them, I’d like to ask you to consider this question: How does a generation like his lose hope?

To be born into the 21st century is to be born into an era of hopelessness. Kim Johnstone is a demographer with the Astrolabe Group. She has provided decades of expert advice on the transformation of Australian communities. Her picture of Millennials (those people born between 1981 and 1996) resembles a child left standing alone in a parking lot wondering where their parent went: “[Millennials] perceive the earth as afflicted by looming and pos- sibly disastrous problems with pollution and climate change. They believe these problems were caused by humans. Logic tells them the people who made this mess are fading from history, leaving the wreckage for them and their kids to deal with.” Johnstone’s observation isn’t confined to these shores. Dr Loren Soeiro is a New York psychologist specialising in helping people find peace and fulfilment. He says millennials are a generation defined by their lack of hope: “Up to 17 per cent of them are depressed and 14 per cent suffer from anxiety. Millennials seek psychotherapy more often than members of Generation X or other, earlier generations.” Why? What sets them apart from those that came be- fore? Why this rising tide of fear associated with the future? The easiest answers are economics and the environment.

The Huffington Post’s Senior Enterprise Reporter, Michael Hobbes, says millennials are facing the scariest financial future since the Great Depression. At the age of 35, the very edge of that generation, he believes that he and his fellows will never experience the freedom adulthood prom- ised. “Like everyone in my generation, I am finding it increasingly difficult not to be scared about the future and angry about the past,” he writes. “My rent consumes nearly half my income, I haven’t had a steady job since Pluto was a planet and my savings are dwindling faster than the ice caps the baby boomers melted.” This, from a financial journalist. Let that sink in.

In 2019, CoreLogic, a leading property data provider, said their research indicated that younger Australians hadn’t given up on the great Australian dream of owning a home. “They want to own homes. In fact, by being denied it, they want it even more,” wrote head of research Tim Lawless. “But they are losing hope that they will ever be able to realise that dream.” Deloitte Australia now calculates that only a third of millennials believe they will live to be better off than their parents.

Economies may yet rise, but perspectives on the environment have settled into a downward spiral. Climate change has risen to the level of an extinction event in our youngest minds. The Australian Millennial Report 2020 is the most comprehensive study into the attitudes, behaviours and expectations of Australian millennials. It sums up the classic millennial in the persona of ‘Sara’ who has spent her entire 20s watching the political machinations associated with environmental policies, with little result other than rising personal tension: “She believes that global warming emissions is the most pressing environmental threat and currently does everything she can to look after the environment.”

However, anyone reading this article should be familiar with a perceived international threat combined with a sense of personal powerlessness. Generation X grew up learning about the terrors of nuclear war, being entertained by films like WarGames, The Day After and Threads and singing along to a stunning catalogue of songs dedicated to the “... shadow of the mushroom cloud”. The baby boomers experienced a lifetime of Cold War confrontations and looming international menace for which nuclear weapons were supposed to be the deterrent. In turn, their parents, the Builders, faced the international tensions that led to the ravages of World War Two. And then there is the Silent Generation, born between 1928 and 1945. Their lifetimes encompassed the War to End All Wars, the Great Depression as well as the Second World War. Yet, I think it’s fair to say that these generations were protected from the millennials’ sense of bleakness by other factors entirely. We find ourselves in a hopeless situation, because hope itself has changed.

Consider the Oxford Dictionary’s definition for hope: “a feeling of expectation and desire for a particular thing to happen”. Note carefully where hope rests: in the heart of the person who experiences the feeling or the desire. Now compare that definition with what the same dictionary lists as an ‘archaic’ or old-fashioned use of the word: “a feeling of trust”. In this case hope depends not on the individual, but on something the individual is trusting in. Hope once had as its focus something you were certain of. Now it relates to things you can have little or no certainty about. This isn’t just a game of semantics. Our changing usage hints at a change in thinking that makes it virtually impossible for millennials to live in hope.

During the late 20th century, intellectu- als, academics and artists were spurring each other towards a new way of seeing the world. Postmodernism, as it came to be known, was a scepticism towards the grand narratives and ideologies that had defined the previous century. Truthfully, there was lots to criticise about all-encompassing ex- planations like Arianism and Communism. However, moral systems soon followed the fate of political ones, and eventually this rejection grew into a wholesale denial of truth itself. This led Nobel Prize winner Harold Pinter to write: “There are no hard distinctions between what is real and what is unreal, nor between what is true and what is false. A thing is not necessarily either true or false; it can be both true and false.”

Education systems embraced this new non-reality. It liberated teachers and learn- ers alike, assuring them every opinion was not only equally valid, but equally right. Politically, party values became subservient to situational ethics. Postmodernism also dovetailed neatly with the West’s growing celebration of individual freedom in the face of community values. ‘Disagreement’ became synonymous with ‘intolerance’, ‘argument’ a wholly negative term, and ‘my opinion’ the deciding factor in every discussion. 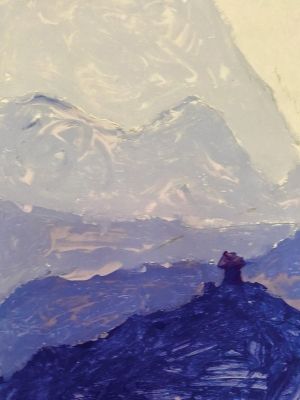 The practical result, though, was that sub- sequent generations were born into a sea of intellectual beige. Back to The Huffington Post’s Michael Hobbes: “This is why the touchstone experience of millennials, the thing that truly defines us, is not helicopter parenting or unpaid internships or Pokémon Go. It is uncertainty.”

Is it any wonder millennials struggle to grow hope, when there’s nothing certain to plant it in? Google the phrase ‘What to do when you have no hope’, and you’ll be provided with solutions like “List your suc- cesses, strengths and resources”, or “Have trust in yourself”. But what if your confi- dence can’t change the world? Where does hope come from? If the only thing you can rely on is yourself, and you are manifestly unequal to the challenges of the day, what is there left to hope for? By contrast, the Bible (the book that earlier generations swore by), focuses on that more old- fashioned definition of hope. In climactic times, it encourages readers to rest their peace not on what we bring to the situation, but what stands strong separate of us. In short, the events of the original Easter. It points to the Son of God, willingly allowing himself to die so that we might live forever, and rising so we can rise to God’s family. Hearts resting on this hope, it says, weather every storm: “We have this hope as an an- chor for the soul, firm and secure” (Hebrews 6:19).

Unlike the other major religions of the world, Christianity builds its hope on events in actual time. “It is as if Christianity happily places its neck on the chopping block of public scrutiny,” says historian Dr John Dickson, “and invites anyone who wishes to come and take a swing.” And they do. Philosophers like Michel Onfray and scientists like Richard Dawkins have suggested the man commemorated this Easter is a myth. Yet it’s worth noting no serious historian is prepared to deny the historicity of Jesus. “Frankly, I know of no ancient historian or biblical historian who would have a twinge of doubt about the existence of a Jesus Christ,” says Professor Graeme Clarke of the Australian National University. “The documentary evidence is simply overwhelming.” Even when we come to the resurrection, agnostic aca- demics like Professor Ed Sanders of Duke University are not prepared to abandon the evidence: “That Jesus’ followers (and later Paul) had resurrection experiences is, in my judgment, a fact. What the reality was that gave rise to the experiences I do not know.”

This is the soil of certainty that Christians plant their hope in this Easter. This is where hope grows. Not by the strength of those who choose to believe it, but the strength of the evidence itself. The truth of the life, death and resurrection of Jesus Christ remains to be rediscovered by every generation, including millennials. And if that truth remains, then so too does hope.

Mark Hadley is the culture writer for Others.