You are here: Home › Features › The Third Place 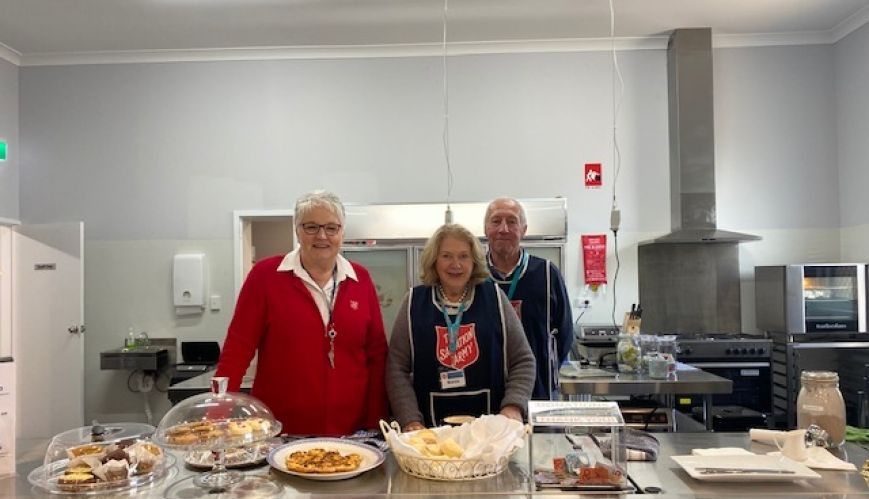 At 65, Floreat Corps Officer Major Lyn Jones could have ‘eased’ herself into retirement. But God had something more in mind for the passionate, energetic follower of Jesus – calling her into one of the most iconic suburbs of Perth to do ‘a new thing’.

“It’s like, ‘God – why now? Why?’” Lyn laughs with gusto. “I’m on my way out!” But the question hasn’t stopped the bubbly Salvation Army officer from being obedient to the strange and wonderful call of God for the final years of her active service.

She says God gave her a vision of ‘doing life with people’ to help them recover from stress, pain, loss – “All the things that all of us in life have to deal with,” she says. “But the people in this area [of Subiaco] don’t normally put up their hand and ask for help.” 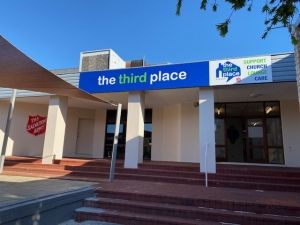 The former Subiaco Corps building in Perth that has been converted into a place of connection for the community.

Subiaco is located in the heart of Perth, among some of the most affluent suburbs of the West Australian capital. It’s the sort of place where The Salvation Army would normally send Red Shield Appeal collectors, not social workers. But in her role as a corps officer in nearby Floreat, Lyn, who has served as a Salvation Army officer for the past 38 years, felt God laying on her heart the everyday struggles of those for whom finances aren’t an issue.

These struggles, she says, may include loneliness, social isolation, relationship breakdown, messy divorces, or stress.

When Lyn outlined her vision to Lieut-Colonels Chris and Stuart Reid [former divisional commanders], they suggested she start to work from the unused Subiaco Salvation Army building and see what developed. God has done a lot in a short space of time!

Lyn now serves as Mission Leader of The Third Place in Subiaco, a Salvation Army expression unlike any other in Western Australia. Completely renovated, the building has office space, a commercial kitchen and café, a worship area and breakout areas for intimate chats or small groups.

What The Third Place doesn’t have is a ‘program schedule’. But if you ask Lyn what happens there you’d better listen carefully as she rattles off a list of connections, partnerships and relationships either already formed or in the pipeline, at breakneck speed!

Volunteers, mainly from the Floreat Corps’ over-55s group, operate the café, kitchen and are around to be present with those who stop in for a coffee, light meal or a chat. “People just come in and we do life, and we just talk about anything,” she says. Those conversations have led to a string of partnerships that are bringing the building to life.

An Alcohol Anonymous (AA) group is starting to meet weekly, a not-for-profit Christian psychology and wellness service called ‘Masters & Co’ is now renting some rooms, as is a pro-bono law firm. A group of Christian musicians want to set up a weekly open ‘jam’ session, another church is using the space for Sunday worship, while The Salvation Army runs Night Church on Sunday nights. A conversation with a group of young married women led to the establishment of a support group for women going through a divorce. 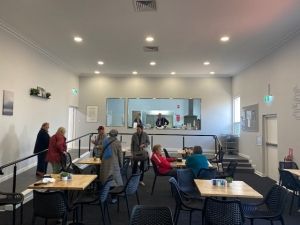 The Third Place – where people can be themselves and be supported.

Lyn admits the potential of the space is unlimited. But despite her overwhelming enthusiasm and boundless energy, she says she’s not planning to ‘do it all’. For a woman who admits she has trouble ‘slowing down’, she is deeply tapped into God’s rhythm of when to move and when to wait. For Lyn, the missional space is fluid and evolving at the whim of the Holy Spirit, who brings people into the building at certain times for certain reasons.

“We will run programs and other things as required,” says Lyn. “We might do a mortgage thing on how to help with your mortgage. We will run whatever needs to be run once the need arises.

“One of the things that The Salvation Army hasn’t been good at over the years is that they start up a program and they never know when to stop it. We flog this dead horse! So, [here at The Third Space] we might run something for six weeks and if the need isn’t there anymore – that’s it.”

The name – The Third Place – is all about being a safe, welcoming, disarming space where people can truly be themselves. “We have our first place, which is our home,” says Lyn. “And our second place, which is our place of employment. In both of those places, there are certain roles and expectations that we have.

“The third place is that place where there are no expectations, there are no roles, you can come and be yourself. You can hang out here and no one expects anything of you.”

Lyn is under no pretence that The Salvation Army can be ‘everything to everybody’. That’s why she is so excited that God is bringing mission partners into The Third Place, as well as people to minister to. She meets weekly with a minister from the Sunday morning church and is excited that members of that congregation are keen to join Salvos in mission during the week.

“That [kind of partnership] is probably new for the Salvos because we are so used to sometimes thinking ‘God wears Salvation Army uniform’, you know?” she says cheekily with a hearty laugh. “But this for me is more about Kingdom-building and working with the other churches and seeing how we in this space can transform the community together.”

“Do you know what speed dating is?” she continues excitedly. “We’re about to do that with 35 community groups in the area.” Don’t be alarmed, she’s not talking about match-making, but a way that different community service groups can meet and exchange information in order to better know what services are available for people in the area in need.

“We are not here to reach everyone’s needs. We can’t, it’s impossible! So, we want to be able to say to people – ‘Oh look, there is this place down the road, we can refer you down there.’”

Lyn says the main focus of The Third Place is about faith, friendship and fellowship. “We make no apologies for who we are, we are faith-based and we are creating that safe space for people to come and be that ‘third place’.

“The main thrust of this space is just to [support people] dealing with life and mental health. If we’re all honest, all of us have to deal with that, just on different levels. We all have stress, anxiety, fear, pain, loss. And we normally don’t deal with that very well! So, we’re going to give people the tools to do that and a safe place to do that.”

With so many key partnerships offering a range of supports from The Third Place, Lyn says The Salvation Army can get on with what it does best – journeying alongside people in friendship and the love of Jesus.

The official opening of The Third Place will take place later this year, but God’s spirit is already moving in the space, making connections and building relationships that only he knows the outcomes of. And it all started with a retiring Salvation Army officer being open and obedient. Listening to Jesus and doing what he said.