You are here: Home › Features › The Verses Project

It was a summer sojourn in New York City last year that inspired the formation of musical trio Verses. A renovated garage became a makeshift studio as husband and wife, Luke and Jess O’Dea, and Luke’s brother, Joel, began creating worship songs as “modern day memory verses”. Now back in Australia, the trio, who are all involved at The Salvation Army’s Northlakes Corps in Newcastle, are putting the finishing touches to their first EP/album. Luke, the band’s lyricist, and Jess, who along with Joel provides vocals, spoke to Pipeline about the passion behind the Verses project.

How did Verses begin?

Luke: We got inspired with the first few songs whilst living in a renovated garage in Brooklyn, New York City. I don’t know what it was about being over there, maybe it was just having the time, but I was very inspired. Some days I would get an idea and just sit the till the sun came up – luckily in New York not much happens before 11am so you can sleep in and not miss much!

Jess: We were inspired to put scripture to song and write the modern day “memory verse”. Even though Luke, Joel and I had worked on music before, this strong sense of a calling to create music to help people engage with and memorise the word of God was a new direction for us.

What is behind the desire to craft your music using lyrics that mirror biblical verses?

Luke: The original idea was to try to create a modern “memory verse”. A way that people could easily understand and remember a bible verse in context.

How does the creative process work for you as a group?

Luke: It works in different ways – sometimes I’ve had a verse and thought “that is a great truth”. Other times I’ve had musical ideas and the verse has come later. Jess usually helps with the final stages of lyrics and melodies.

Jess: Luke always says “you only need 10 seconds of inspiration, the rest just takes hard work” and that’s really what this has been. Being inspired can bring about a really great feeling but getting the songs to the finished state, to the point where they can go out and minister to people, is an act of discipline long after the inspiration has faded.

Do you draw on a variety of translations?

Luke: We usually try to use one translation for the main verse. But we do use other translations just to try to understand what the author has been inspired to say and also look at how we can help establish context for other parts of the song. 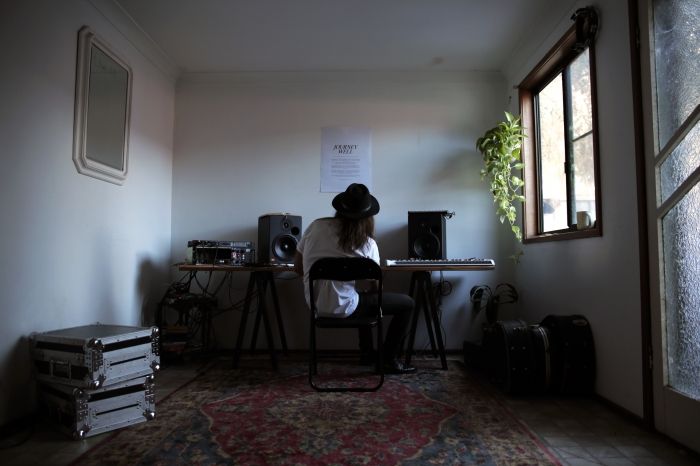 Lyricist Luke O'Dea combines inspiration and the hard work of composing to bring to life the modern day "memory verse".

Your goal is “to make Jesus famous”. What does this mean for the group?

Luke: The whole goal of this project was to make the word (of God) easy to remember. The point of people listening is to connect them with Jesus and we’ve already seen it happening. That’s the point – that we would be used to get the music and His word into peoples lives.

Jess: We are confident that the Word of God, when sent out, will do what it is designed to do – to make him known and encourage his people. We just want to keep creating music that represents him well and is committed to excellence. Through his provision we have been working with some of the best mixers and producers globally to honour the vision he gave us.

Why is it important to you to be creating this particular genre of worship music?

Luke: I believe that music can connect people where maybe words cannot – across cultural and religious or non-religious divides. Music is a big part of the Salvation Army movement – the music was probably a big reason why people were drawn to the Salvation Army to hear William Booth preach. Why can’t that happen again today? Why can’t music be something to that is used to stir young people and even older people to draw near and come into relationship with God. Why can’t we continue the great legacy of the Salvation Army through “electronic” music? It’s the same anointing and calling as when William Booth was called – it just looks and sounds a bit different.

Jess: We love the incredible heritage The Salvation Army has in finding new and practical ways to reach the lost with the message of Jesus. It may seem to be a world away from the “traditional sound” of the Salvation Army but it is exactly in line with the traditional heart of the Salvos to draw people to God through music that is relevant to their culture and time. William Booth was asked a similar question, his reply was: “Not allowed to sing that tune or this tune? Indeed! Secular music, do you say? Belongs to the devil, does it? Well, if it did, I would plunder him of it. Every note and every strain and every harmony is divine and belongs to us.”

What are your future aspirations as a band?

Jess: We just want to be faithful to God in what he is asking of us – for now that’s producing music based on his word to uplift, inspire and point people to him. We believe in the power of memorising scripture and will continue to create music based on this.

You can check out the latest music from Verses at versesmusic.com