You are here: Home › Features › These Are Our People

'These are our people' 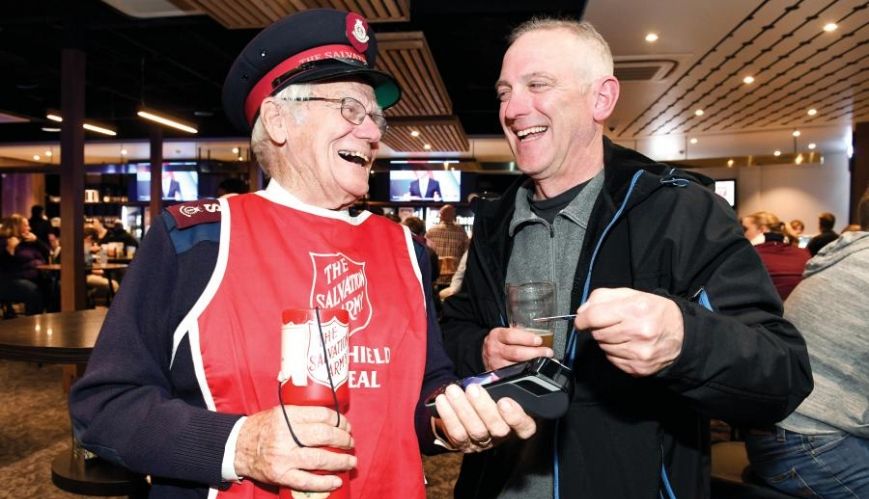 'These are our people'

In August, 1951, a young Salvation Army captain was escorted by police from a Sydney suburban hotel and charged with disorderly conduct. His crime was that he had been handing out copies of the War Cry to pub patrons against the wishes of the publican.

Sydney’s Sun Herald newspaper of 12 August 1951, reported that Captain Ivan Rees, then aged 30, and officer-in-charge of The Salvation Army’s Lidcombe district, was taken from the scene at Regent’s Park by a sergeant and constable in a police (motorcycle) sidecar. Captain Rees was released on bail to appear at Parramatta Court. 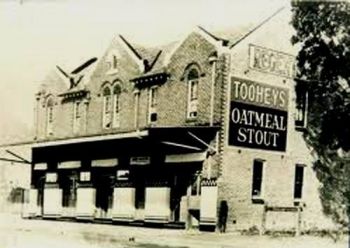 In the meantime, hotel patrons, angered by the captain’s arrest, walked out of the pub (pictured right) and vowed not to return until Captain Rees was allowed back. Captain Rees was a much-respected man, according to a hotel patron. “He is an ex-serviceman of the last war (World War Two) and wears five medal ribbons on his (Salvation Army) uniform,” the Sun Herald quoted the patron as saying.

Colonel William Cooper, The Salvation Army Australia Eastern Territory Chief Secretary at the time, told the newspaper that the Army had been handing out the War Cry in hotels for 60 years before Captain Rees’ arrest without incident of this kind.

He appeared at Parramatta Court on Monday, 17 September 1951. The following day, the Sydney Morning Herald reported that the magistrate had ruled Captain Rees had no case to answer. He had not acted in a disorderly manner.

The hotel licensee had told the court that Captain Rees was “shaking a box and disturbing my customers”. But the magistrate said: “On the evidence before me, I don’t think a prima facie case has been made out that Captain Rees at the time was a disorderly person.”

There are no other recorded incidents of the Captain Rees kind, although a woman Salvationist was banned from a Wollongong hotel in 1969 because The Salvation Army had joined a campaign against the introduction of Sunday trading. The Illawarra Mercury newspaper of 5 November 1969, reported that Mrs Elsie Smith was prevented from entering the hotel with her War Cry copies and collection box for the first time in 48 years of hotel ministry. Like in the Regent’s Park case, patrons at the Wollongong hotel walked out in sympathy with Mrs Smith.

The following day, the Illawarra Mercury, on its front page, published a story under the headline “Army Wins War”, reporting that the Australian Hotels’ Association said it was a misunderstanding. Mrs Smith – and her supporters – were soon back in business.

Although there does not appear to be a historic record of The Salvation Army’s hotel ministry in Australia, Mrs Smith’s case reveals she was participating in 1921, and official Salvation Army comment about the Captain Rees incident takes it back to possibly 1890. In his publication In Darkest England and the Way Out (pictured right), Salvation Army founder William Booth tells the story of a young woman engaged in hotel ministry in London. The book was originally published in 1890, so it’s reasonable to assume his story referred to events in the 1880s, at least. It’s a wonderful story, told only in that engaging fashion of the Army’s founder.

Her name was Rose. She was, in the words of William Booth, “ruined, deserted and left to the streets when only a girl of 13”. She was “fatherless, motherless and you might almost say friendless”, Booth wrote. “For 12 long years... her wild, passionate nature, writhing under the wrong suffered, sought forgetfulness in the intoxicating cup and she soon became a notorious drunkard.” She appeared in court 74 times.

As she left prison after her last arrest, Rose came across Salvationists beating drums and singing, “Oh, the Lamb, the bleeding lamb. He was found worthy”. She followed the Salvationists to the local Army barracks, where she made her way to the penitent form and, as William Booth wrote, to Christ. “Rose is now a War Cry sergeant,” he reported. “She goes into the brothels and gin palaces and other haunts of vice, from which she was rescued, and sells more papers than any other soldier.”

Three months after her conversion, 3000 townspeople turned up to an Army meeting to hear Rose give her testimony. It was obviously one of William Booth’s greatest moments.

In her book Bramwell Booth, she paints a picture of Whitechapel at the time as “... darkness, drunkenness and dirt at home in its ill-lighted alleys and waste patches ... humanity densely packed the dingy houses in all the narrow streets that flanked the less narrow streets where markets flourished and where every fifth shop was a gin shop.”

William (senior) and William (junior) were walking in the streets. William (junior) would have been about nine years old at the time. “You might have seen the man (William, senior) stop abruptly, take the child (William junior) by the hand and, pushing open the swing door, pass from the crowded street into the more crowded public house bar,” she writes. “Willie, these are our people; these are the people I want you to live forand bring to Christ,” says William (senior) to his son.

This was the seed for the beginning of Salvation Army hotel ministry.

The Officer magazine, dated February 1893, under the heading “Public House Brigade”, provides an example of Salvation Army teams in England visiting hotels at least around 1890. Its example is of a town of 30,000 people, divided by The Salvation Army into six districts. Two “lasses” were appointed to each district. They visited every hotel in the town every Saturday night, handing out copies of the War Cry and handbills and “speaking or praying as opportunity was afforded”.

At times, the young women were abused, forced outside or had beer thrown over them. “But,” said The Officer magazine, “... the result was a perceptible increase of this class at the meetings; an increase of soul-saving, including a publican.”

In Australia, there are War Cry reports of a public house brigade visiting 35 pubs in Echuca in 1890. Other War Cry reports refer to Sydney (1893), Newcastle (1898) and Port Pirie (1902). There was even a song published about “public houses”. The Australian War Cry dated 26 January 1901, published the words of a song, under the heading “A Good Saturday Night Solo” and titled “No Pubs Over There” (apparently referring to heaven).

The hotel ministry in its original form continues in Australia today. But there are more modern expressions of it, too. While uniformed collectors still go into pubs – especially on Friday nights – with their War Cry copies and collection boxes, a new-style hotel ministry has sprung up in Sydney.

Laurie is old-style. He carries copies of the War Cry and a collection box into noisy pubs by night. He moves among the bar and drinking tables, chatting with scores of people each visit. They call him the padre. He is a volunteer. Susie (pictured right) doesn’t distribute the War Cry or accept donations. She visits hotels by day. Some days, she may speak to only one or two people, depending on a need. That need may mean that Susie spends more time outside the pub than inside. She is a full-time Salvation Army employee. Despite the different approaches, their intention is the same – to be available and ready to assist. 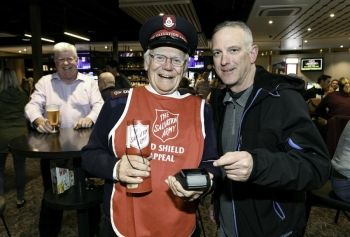 At 81, Laurie is a seasoned campaigner. A life-long Salvation Army supporter, he can talk fondly of William Booth’s early days. He is aware that William Booth said that people in pubs were The Salvation Army’s people. “Go out and get them, Booth said. And bring them to Jesus,” Laurie says. “But you have to go out first. We must not forget the real reason for hotel ministry.”

Laurie has been a prolific hotel visitor – depending on officer appointments – since he was a cadet in training for Salvation Army officership 53 years ago. For the past 17 years, in retirement, he has been a regular caller at five hotels in Adelaide’s Glenelg area on Friday nights. “I didn’t sign up to be a Salvation Army officer until I reached 65. I signed up for life. So, when the Army said that’s it at 65, I kept going,” he says.

Longevity in the role, according to Laurie, is imperative to building trust. “They (Glenelg hotel drinkers) call me their padre or chaplain now. They say I bring church to them. I’m OK with that. Sure, I take a collection box. But, really, I don’t go just to collect. As I see it, I’m just a sounding board. My job is to listen. They tell me about problems with their teenagers, their wife, their job; that sort of thing.

“I don’t have all the answers all of the time. I do have my faith, though, and as I share my testimony, they see how I have, through faith, dealt with issues in my own life. We’re called to witness for Jesus. His Holy Spirit does the rest.”

As a result of his ministry, Laurie has visited people at home and in hospital, conducted weddings and funerals, and made many new friends. “For me, it’s meeting people on their own ground,” he says. “I believe that’s what Jesus did. He dined with sinners. So, why can’t I?”

Susie has been in full-time hotel ministry for the past two years. Her mission field is 43 hotels in the ALH (Woolworths) Group in Sydney and Wollongong. Major Marilyn Smith is Team Leader of Hotel and Club ministry in the Australia Eastern Territory. She says the ministry styles of Laurie and Susie are equally important and effective, although her team’s direction is headed more towards Susie’s approach.

“There definitely is a continuing role for corps, in particular, in hotel ministry, especially for fundraising and building casual relationships,” she says. “The hotel ministry our team is moving toward is more of chaplaincy. Building relationships at a deeper level may mean helping hotel staff and patrons find housing, attend court with them, visit them in custody, find a place in rehab programs or aged care centres, provide welfare assistance or pray with them. It’s a specific chaplaincy role.” 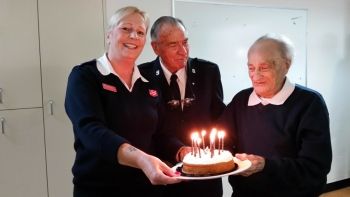 “Absolutely,” says Susie (pictured right), who worked in hospital administration before starting as a volunteer and then full-time with The Salvation Army’s Sydney Oasis youth outreach and later Streetlevel centre 21 years ago. Susie did night-time pub visitation during those days.

She became a soldier 15 years ago and is now connected to Auburn Corps. Her role as a full-time hotel chaplain is the first of its kind in The Salvation Army in Australia. It is done more effectively by day rather than at night, she says, because it allows more time in a quieter environment. “It’s harder to have deep discussion with people in a pub when they are enjoying themselves with their mates,” she says. “Visiting in the day also allows quality time with hotel staff.”

Major Smith’s team also has four full-time chaplains in registered clubs, with plans for another four next year. Although club chaplains were originally appointed to work with problem gamblers, they have discovered a lot of their work is with club members who treat their clubs as community centres and approach the chaplains for advice and assistance with family issues.