You are here: Home › Features › What Do Australians Think Of The Salvation Army

What do Australians think of The Salvation Army?

What do Australians think of The Salvation Army? Australia’s trust in The Salvation Army continues to be strong, according to a recent survey. Since January 2014, the social research firm McCrindle has asked more than 7000 Australians about their perceptions of The Salvation Army and its work. The results have been extremely positive, showing that a majority of Australians see the Army as a respected, trusted, non-discriminatory organisation, helping people in our community - and that good opinion is on the rise. The most recent survey, in January this year, showed positive perception of The Salvation Army has remained constant throughout the surveys since January 2014.

The survey included Australians aged from 18 years to over 70 years, with a majority of respondents (81 per cent) from the 21-69 years age bracket.

Overall, when Australians think of The Salvation Army, they associate it with highly positive words such as “Help those in need” (70 per cent), “caring” (56 per cent), “active in the community” (62 per cent) and “trustworthy” (48 per cent).

“The Salvos consistently come up as an organisation that Australians trust,” says McCrindle Research Director Eliane Miles. “It is really as a result of the strength of their work on the ground, that long-standing service they have provided which demonstrates that actions speak louder than words. "Significantly, the survey reveals that the Christian faith at the heart of The Salvation Army’s work and mission remains a positive aspect of their identity for many Australians (77 per cent of those surveyed).

“What is interesting to us is that while Australians are engaging less with a worshipping community, they increasingly want to engage with Christian providers such as schools and aged care," says Eliane. "In some of our latest research, we have seen a shift, from 16 per cent to 26 per cent, in Australians likely to give to a Christian organisation. Australians believe Christian organisations are more likely to be trustworthy and add value to those services. So the church in Australia has a real opportunity and The Salvation Army is already leaps and bounds ahead in this area.”

Perceptions towards two key brand images, The Salvation Army logo and the Red Shield logo, both evoked positive responses from those surveyed. When asked what best describes the organisation that is represented by The Salvation Army logo, 25 per cent of participants said “it transforms lives and really helps our community”. Another 39 per cent said: “It’s a good organisation that makes a difference.” A further 23 per cent said it was “worthwhile and does some good things”, while 10 per cent said “it's an OK charity and probably helps some people”. Only 3 per cent identified it as “a religious charity and doesn’t do very much”. 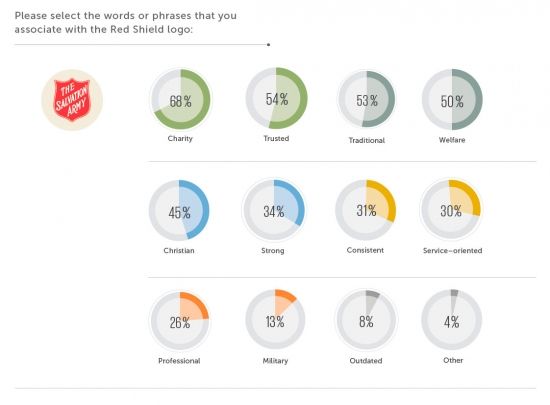 While there was little surprise that the Red Shield logo was recognised as a charity (68 per cent), more than half of respondents associated the image with “Christian” (45 per cent) and significantly, with the word “trust” (54 per cent). Only a small number of respondents associated the logo with the word “outdated” (8 per cent). In an age where recommendation is a highly valued currency, 20 per cent of survey respondents were highly likely to recommend The Salvation Army to someone looking for a charity to support, one stating their reason was that "The Salvos are always available to help, without judgment and they genuinely care to their situation". In addition, 42 per cent of respondents said they would be extremely likely to recommend The Salvation Army to someone in need of help.

Eliane says maintaining the profile and positive regard of the Australian public would require a continuing commitment to engaging with generational and cultural challenges. “The reality is that the work on the ground is only going to increase as the cost of living and housing affordability rises and issues such as loss of connection,” she says. “In our Australian Community Trends it showed that 37 per cent of Australians are influenced to give to organisations with whom they have a personal connection. So there remains a key opportunity for the church to engage with their community in ways that will raise their awareness and profile.”

The Salvation Army’s Australia Eastern Territory Chief Secretary, Colonel Mark Campbell, believes that while we should be careful that our focus on such survey results do not lead us to becoming preoccupied with what people think of us, or compromise who we are, these were very encouraging results. “There is a line that we need to draw that is being liked by the community and doing what God wants us to be and do in the community, which is an outworking expression of our healthy faith in Jesus,” he comments.

“I think we need to keep our vision alive that sees people finding freedom in Jesus. Our corps and social work are missional work to break circles of poverty, addiction and debilitating habits, to name just three.

"We are gifted in the dark places and have an opportunity in these days as we courageously look at how we are stewards of God’s resources.

"We need to plant new work and find out what that looks like in these days and the days ahead. The community is looking for outcomes not just outputs, they are looking for transformation, what difference, what impact The Salvation Army is making. May God lead us and may we be open to seeing a new thing.”