You are here: Home › Global Focus › Enrolments Lead Into Historic Us Leadership Summit World leader of The Salvation Army, General Brian Peddle, greets people arriving to attend a special worship service at Fort Lauderdale Corps, Florida, ahead of a historic national summit involving the leadership of all four of the Army’s territories in America.

General Brian Peddle, the world leader of The Salvation Army, last month enrolled 20 senior soldiers and eight junior soldiers from various corps in the Florida Division ahead of a historic series of meetings in the United States. 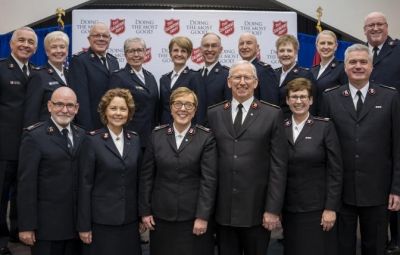 The enrolment segment was part of the United South Florida Holiness Meeting, led by Chief of the Staff Commissioner Lyndon Buckingham. Hundreds of officers, soldiers, and friends of the Army from the division attended.

General Peddle challenged the new soldiers to follow their covenant and promise and continue their commitment to the Lord and challenged the congregation to live out the mission of the Army.

After the service, the international leadership team and the US National Commanders, Commissioners Kenneth and Jolene Hodder, joined Area Officers from the Florida Division and their families and Local Officers for lunch.

The worship service followed an earlier function at the Fort Lauderdale Adult Rehabilitation Centre, where the redeeming work of the Lord was celebrated as graduates of the program were acknowledged for their achievements.

The General and Commissioner Rosalie Peddle, the World President of Women’s Ministries, were in Florida for a two-day Leadership Summit. It was the first time international, national, and territorial leadership teams from all four US territories had met for such a summit, which was convened to seek God’s guidance and vision for Army in America.

The Peddles and Commissioners Hill met the National Advisory Board at its tri-annual board meeting where General Peddle and Kenneth shared how the movement was growing across America and of opportunities arising for the Army in the US and worldwide.

General Peddle said leadership was an integral part of an officer’s life, and it was a privilege to join with leaders from all four US territories and with members of the National Advisory Board: “It really was a joy to meet with these devoted people in their own country,” he said.

“One of the great delights for me as General of The Salvation Army is to meet our officers, soldiers and friends around the world. The pandemic has made this especially challenging for us all, and nothing beats being able to have meaningful conversations with people face-to-face,” General Peddle said.

“I was delighted to worship with people from all around the USA and, in particular, to enrol new soldiers,” he said.

Commissioner Peddle said the COVID-19 pandemic had prevented many face-to-face meetings and activities – “those meetings where we can see each other smile and share our faith together”.

She said the trip to the US had “a packed itinerary, with some challenging conversations” yet was delighted to have the opportunity to share time together in friendship and fellowship.