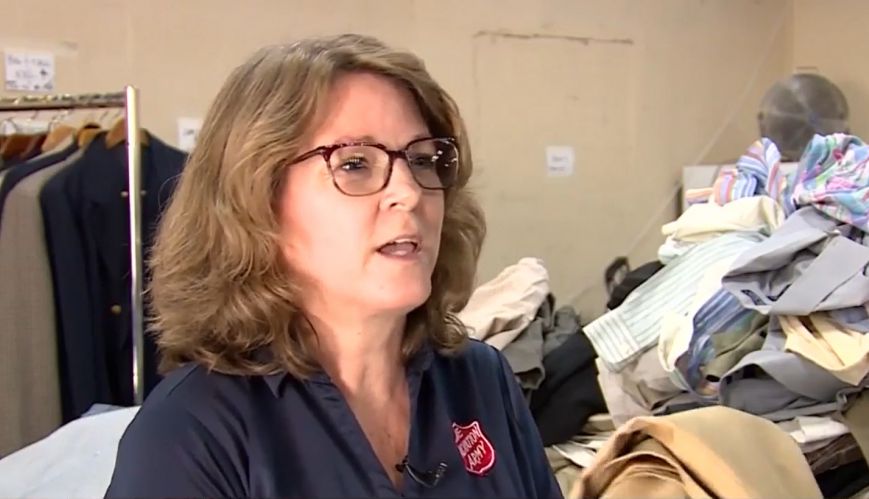 Kim Johnson, Director of Development for The Salvation Army in Martin, St Lucie and Okeechobee counties, Florida, and the trench coat in which $US20,000 was found.

Workers at second-hand stores run by The Salvation Army around the world regularly find a range of interesting items in the donations they receive – from expensive jewellery to unsavoury rubbish.

But, just when they think they’ve seen it all, something new bobs up.

At The Salvation Army Family Store in Stuart, Florida, a shy retiree who has been a volunteer there for nine years came across a tan trench coat that had just arrived with other clothing to be sorted.

Kim Johnson, Director of Development for the Army in Martin, St Lucie and Okeechobee counties, said the worker thought the coat was “a little heavy for the quality of the fabric”.

“She reached into the pocket and found four envelopes filled with money,” Kim said. “[Her reaction] was like: ‘Oh my!’”.

Kim said the volunteer was concerned that the person who donated the coat would not have intended to leave the money there, so “we need to find out who it belongs to”.

One of the store’s drivers, who had just brought the clothing in, was contacted. He said he’d just made a routine pick-up of furniture from a family who was cleaning out the home of an elderly loved one who had passed away.

“When the truck drivers arrived to pick up the furniture, the daughter-in-law asked if they could also take some other items that were in the closet. She handed them several items of clothing, including a brown trench coat, not knowing what was in the pocket,” Kim said.

It was only when the clothes had been delivered to the store for sorting that the money was discovered.

“She [the volunteer worker] picked up the coat and said that it felt heavy to her, so she checked the pockets and pulled out four envelopes filled with money,” Kim said. “She gave them to the store manager who took it to the office and counted it. It totalled $US19,842. The [deceased] man had written on each envelope the total amount inside. That’s how we know nothing was missing [but] he had miscounted, and there was even more than he had written.

“We called the donors and, when we told them what we had found, the man’s son said it sounded like something his father would do. They said he was always hiding money in secret spots around the house, and they thought they had found them all.

“They were so surprised and so grateful that we had called. They met the manager at the store a few hours later to pick up the money and gave a donation to The Salvation Army in gratitude.”

Kim said returning the money was the right thing to do “because it didn’t belong to us”. “We know that that family did not intend to give that much [as a] donation,” Kim said.