You are here: Home › Global Focus › Getting The Good Oil On Mission And Ministry In The Solomons

Getting the good oil on mission and ministry in the Solomons 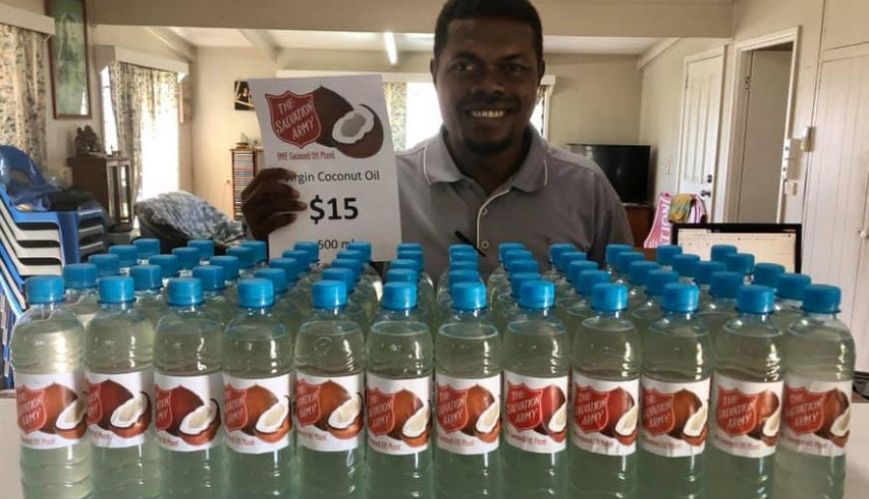 Getting the good oil on mission and ministry in the Solomons

Honiara Corps Officer Envoy Wency Ramo’oroa with some of the coconut oil his corps is selling that was produced by the Direct Micro Expelling plant at the Gateway Corps in Kwai Village, Solomon Islands.

The Salvation Army, in a first for the Papua New Guinea and Solomon Islands Territory, has gone into commercial coconut oil production.

Profits from the sale of the top-quality oil – produced in The Salvation Army’s own plant – is being used to support the mission and ministry of the Army in the country.

The first batch of oil – 6x60 litre barrels – was produced in February this year and Honiara Corps has been selling 500ml bottles for $SBD15 [about $AUD2.55]. Australian Salvation Army officer Major Robert Evans, the Solomon Islands District Officer, said this oil was the first bottled individually to be sold directly to customers in Honiara.

The Army set up a Direct Micro Expelling (DME) plant in 2019 on the island of Malaita – on the family property of Gateway Corps Officer Envoy Charles Akwasitaloa – to create jobs in the area and to help build community. Since then it has produced about 200 litres of the premium-grade, extra-virgin oil to be sold across the country and around the world.

Robert said it was an important part of the mission of the Gateway Corps in Kwai Village, which is in the north of Malaita Island. The corps building and the DME plant share the same property. “Corps members were involved in the clearing of the land and the construction of the shed to house the DME equipment,” Robert said. 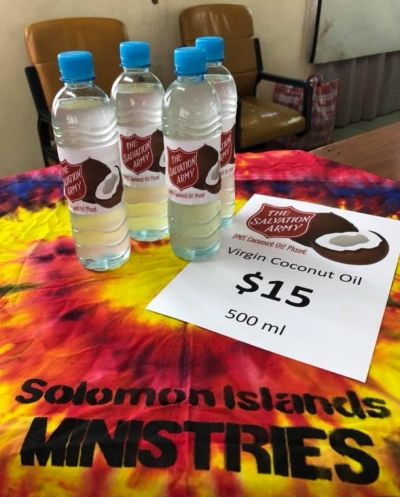 The coconut oil from the Gateway Corps in Kwai Village sold in Honiara to support the mission of The Salvation Army in the Solomon Islands.

He said the Army fitted out the plant with the help of coconut technology company Kokonut Pacific (Solomon Islands), which developed the DME system in 1994 to take coconut processing back to the farms where the nuts are grown. Kokonut Pacific trained the workers at the Army plant.

Robert said once a coconut entered the production process it could be turned into extra-virgin coconut oil within 60 minutes. He said that, while the Army had been selling some individually bottled oil, the bulk of production was sold back to Kokonut Pacific, which is used to make its products that are sold around the world.

“The bottled oil we sold directly to customers in Honiara was to give local Salvationists an opportunity to sample the product another Salvation Army corps is producing,” Robert said. “This allowed them to participate in this part of our mission through their purchase directly from us, rather than via KPSI.

“Since that batch, we have sold another 120 bottles directly to a growing customer base among our networks. Many of these direct customers participated in our fundraising event in 2018 to purchase the DME equipment.”

The plant workers are employed from the village and the coconuts bought from farmers in the area. The Army retains the profits from the sale of the oil and any by-products.

Robert said the production process could be summed up in a few words: buy, crack, shred, dry, press, bottle, sell. Once processed, the oil is put on trucks for the five-hour drive along a rugged dirt road to the island's main port in Auki to be shipped to Honiara – another five-hour journey.

Robert said Kokonut’s mission and vision was similar to the Army in that, as its website says, it aimed to ‘empower and bring home by forging partnerships with local communities to improve their lives by building sustainable value chains and revitalising the smallholder coconut industry with appropriate technology’.

The coconut oil produced by DME plants around the country was a major local product that contributed to the export market and the local economy. KPSI set the price for buying oil from DME plants according to international market values and local demand. “At this moment in time, we receive $19/kg for A-grade oil,” Robert said.

While it is difficult to measure how Solomon Islands coconut oil compares to other places in the world, Robert said the oil produced by the DME method was a much higher and purer quality than oil produced from ‘copra’. “Oil from ‘copra’ is known as ‘crude oil’ whereas oil from ‘DME’ is ‘organic virgin oil’,” Robert said. The DME oil has a mild flavour and aroma; a different taste to other extra virgin oils.

Since the Army plant began full operation in January almost 2000kg of oil has been produced.

Robert said this was below average compared to other plants as “we have had to navigate a number of challenges in the village”. He added: “It is our intention for this to be a permanent operation to maintain regular employment opportunities in North Malaita and a sustainable locally generated income for The Salvation Army Solomon Islands District.”