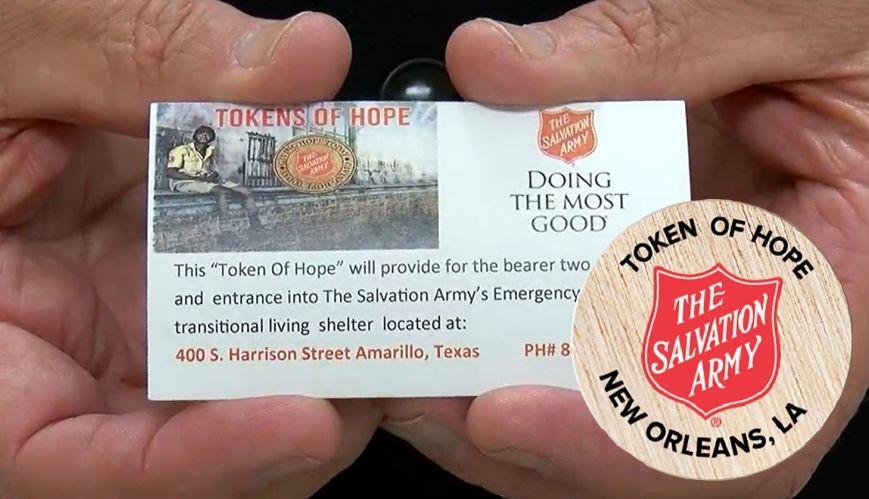 Amarillo Corps in the north of Texas is giving the community the opportunity to help a person experiencing homelessness by giving them a Token of Hope card they can redeem for accommodation and food. Inset: The wooden Token of Hope from New Orleans.

The Salvation Army in Amarillo, north Texas, has introduced a program to involve the community in helping those experiencing homelessness – a token that can be redeemed for accommodation and food. 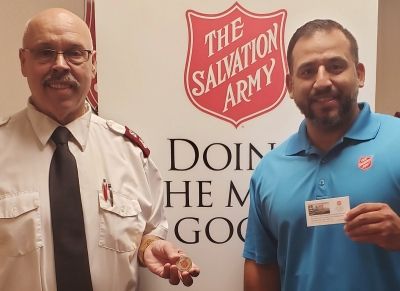 Quintin Marquez, the Army’s Public Relations Manager in Amarillo, said the program, called Tokens of Hope, allowed the community to give one of the tokens to a person experiencing homelessness rather than cash.

Amarillo Corps Officer Major Ernest Hull said the Tokens of Hope had the ability to not only help a person “for a moment” but bring about a lifetime of change.

Quintin said it was hoped that once people took the opportunity to “cash in” one of the tokens, they would begin a journey into one of the other programs the Army ran in the city. “This is a better way to express your care for them and help them know The Salvation Army is here to help them out,” he said.

Ernest first encountered the Tokens of Hope initiative during his appointment in Greater New Orleans, where the program was introduced in 2019. When he and his wife Debbie were transferred to Amarillo, they suggested it begin there, too.

In New Orleans, the tokens were a round, wooden chip that could be exchanged for a meal, shelter placement, a food box, bus pass or “some other life need”. The tokens are a printed card in Amarillo because Quintin said a map and other Army information could be printed on it.

Tokens of Hope in Amarillo has been going for about three months and already is receiving a good response from the community.

Quintin said the Amarillo community was a great support of any initiative the Army introduced and quickly got behind the program. The tokens, which the public can pick up from the Army centre in Amarillo, are exchangeable for two consecutive night stays and two free meals.

Quintin said the tokens were free at the moment, thanks to a sizeable public donation to support the introduction of the initiative but were expected to cost about $US10 each as the program continued. “Imagine going to a motel or hotel and stay for two nights. It’s pretty expensive. Or giving [a person experiencing homelessness] $5 or $20? These [tokens] will be a lot better deal for them,” he said.

Ernest said the Army in Amarillo was one of three centres in America where the program had been run successfully.

“The Salvation Army’s new Tokens of Hope program is a transitional living program. Our goal is to take a person living on the street and turn them into your neighbour again,” Ernest said. “Through intense case management, with our new case management team, life skills training are getting folks into jobs where they might be unemployed, getting them working, starting to save money. By giving them more than just food or money, you’re giving them a future, a chance at a different life.”