You are here: Home › Global Focus › Howard Hospital Offers Treatment For All

Howard Hospital offers treatment for all Howard Hospital offers treatment for all

Howard Hospital has been operational in Zimbabwe since 1923, and in its current buildings serving local communities, and beyond, since 2014.

I’d been told that April is a good month to visit Zimbabwe, especially for anyone planning on heading away from the cities and into rural Africa. The rainy season is over, so everything is lush and green, and the temperatures are much kinder than in the roasting summer months.

This is confirmed as I head out of the capital Harare on a late April morning, along gradually roughening roads into the heart of the country. Tall maize fields hem in our minibus for mile upon mile, interspersed by spectacular views across lakes and small groups of dwellings, usually accompanied by small groups of people selling or cooking by the side of the road.

As we move from the main road to a dirt track, our progress slows and we start to see more traditional thatched huts and fewer brick buildings. This gradual ruralisation makes our next view even more out of place: Howard Hospital’s smart, sleek, modern buildings look no more out of place in the African bush than if an alien spaceship had landed! It’s immediately obvious that this is a place that is cared for. Planted areas and well-kept lawns go beyond what would be expected and give a clear message to patients and visitors that they are both welcomed and valued.

The hospital’s administrator, Major Edmore Zinyowera, (pictured at right) has been at Howard for three years. He tells us that a Salvation Army hospital has been in this area since 1923 but that the current set of buildings only opened in 2014.

In some ways, the 144-bed facility barely seems like a hospital, with wide corridors and high ceilings providing a spacious and
welcoming environment. There isn’t even the familiar “hospital smell” that can bring about instant feelings of fear and worry!

The site, Major Zinyowera explains, covers about 50 acres and includes a training school for 53 nurses. He shows us where the hospital treats its own water and we see generators that kick in to provide power when the main supply fails. They are in operation during our visit.

There is a constant stream of people arriving as outpatients. We are told that even on Sundays, when the clinic is closed, people will arrive for treatment, sometimes carried by friends and even brought in by wheelbarrow. “We are serving our community,” says Major Zinyowera. “No person will go home without receiving assistance.”

That community is not insignificant in size. More than 24,000 people are in the hospital’s catchment area but the immediate area is home to 150,000 people.

Just the previous week, life had become even busier. A nurses’ strike at government hospitals meant people from miles away sought treatment at Howard, placing greater demands on staff and infrastructure.

This highlights one of the great challenges faced by Major Zinyowera and his team – it’s not easy to support everyone; resources have to come from somewhere.

And this is the balance that the major tries to find. Treatment is available irrespective of people’s ability to pay and the fees are kept lower than at other hospitals. But someone needs to fund the running of the facility and the staff, which is why Major Zinyowera recognises the importance of funds provided by the international Salvation Army. 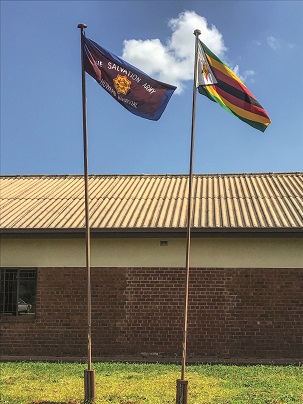 Even when the government gives extra help (a recent report highlighted the need for extra nurses, so 50 are being provided, some of whom have already arrived) it’s not all good. These new nurses – and their families – will need somewhere to live. This is not simple, especially as Howard is nowhere near a town or city. Training rooms and the old hospital buildings on the neighbouring plot will be used temporarily while new accommodation is built.

There are other plans for the old hospital site, too, with the possibility of it being renovated and turned into a conference centre.

Fundraising programs already in place include growing fruit and vegetables, rearing chickens, and running a tuck shop for patients and visitors. Any funds raised can be used to buy medications and provide care.

The innovation doesn’t end there. Howard Hospital has also put in place a practical measure that is saving lives of mothers and children.

A section of the site is given up for pregnant mothers to stay while they wait to give birth. Because of this, up to 85 women don’t have to stay at home – sometimes several hours’ journey away – and risk having to travel long, difficult journeys while in labour, with the risk that some wouldn’t even make it in time and would have to deliver their own babies by the side of the road.

Major Zinyowera says that this is the only such facility in the whole of Mashonaland Central Province.

The expectant mothers can wait a month, says the major, though some have stayed for up to six weeks. They have their own vegetable garden and orchard and, for the poorest mothers-to-be, funds are made available to buy food and essentials.

Walking around the hospital, we come across sights that would be familiar around the world. In the well-equipped physiotherapy room we hear about the work with children born with club feet whose treatment is providing a new lease of life. Past the operating theatre and the jam-packed children’s clinic we enter the post-natal ward, where the matron shares how the care provided prepares mothers to look after their newborns.

Perhaps surprisingly, what comes across clearly in this place of high-stress situations is the sense of calm – though the peace is often broken by the sound of a baby’s cry or the chatter of small children.

Patients relax in the shade along covered walkways that link the wards. A chapel is open to anyone to pray. The testimonies at the Sunday meetings, we are told, are amazing, with patients giving thanks to God for healing and renewed hope.

Major Zinyowera didn’t become a Salvation Army officer to be a hospital administrator. But while he may not be leading a church, there is no doubt of the spiritual basis that underpins everything that takes place in the institution he runs. The staff and patients are his “congregation”, and he recognises that he is doing God’s work: “People have to see the Lord,” he says. “Even in an administrator.”

It’s true. People have to see the Lord – even in a hospital.

This article first appeared in All the World, July-September 2018. Kevin Sims is the editor of this publication, produced from The Salvation Army’s International Headquarters.