A Zambian junior soldier enjoys the opportunity to take a photo with General Brian Peddle and Zambian President Hakainde Hichilema. 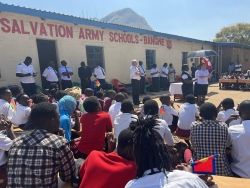 The international leaders visited a Salvation Army school at Bangwe.

Malawi, the first stop, is known among the African nations as the ‘warm heart’ of Africa. “Over the past days, we have proven this to be so as we have interacted with Malawians and especially our Salvationists,” wrote General Peddle on his Facebook page.

“We gathered in Blantyre (capital of Malawi) from all across the nation and shared in congress celebrations. I was privileged to enrol senior and junior soldiers, commission territorial brigades and meet with 17 cadets who will be commissioned later this year. The Malawi Territory is positioned for growth, and our people are ready to move forward by his grace. We were inspired and blessed.

“We were intrigued by our school and health centre at Bangwe as the impact and help to the community is outstanding. We also thank God for the many young people. We applaud their giftedness, their enthusiasm and their passion. God bless them. We leave Malawi with some of the ‘warm heart’ of Africa still with us.”

In Zambia, the leaders joined the territory in celebrating their centenary year. The Salvation Army there serves in many communities through congregations, schools, hospitals and health clinics. In addition, there are many projects across the country, from women’s empowerment to sustainable agriculture.

At the centre of it all is the gospel message and, as noted by Hakainde Hichilema, President of Zambia, “You are a people who serve.”

In Ghana, where the leaders are still visiting, they commissioned cadets who had completed two years of officer training and will now commence appointments across Ghana and Togo. “The atmosphere was charged with Holy Spirit joy,” wrote General Peddle. “Amazing moments. God bless them as they serve.”

Conversations unfold over origami in Tokyo 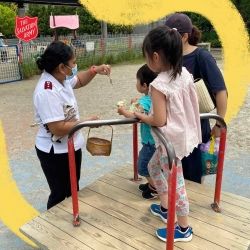 In Japan, a new ministry in the park is introducing the community to The Salvation Army.

The Salvation Army has a long history of reaching people creatively, which Captains Phillip and Sejal McCutcheon leaned into when they moved to Tokyo as Koto Corps officers.

As they walked their daughters through the park to school, Captain Sejal said she noticed many mothers playing with their children and the idea for a new ministry was born – origami in the park.

“I had the idea of starting a ministry to introduce ourselves and the church to the parents and kids,” she said. “Japanese people are very shy at first and often would not come up to talk. With that in mind, children and adults alike enjoy the traditional Japanese art form of origami here, and I thought that this would be the opportunity that I needed to break the ice. I prayed for a way to reach people and make the gospel accessible.”

Captain Sejal enlisted help from the Koto Corps women’s ministry group and others who enjoyed making origami. Now, every Thursday, Captain Sejal and corps members visit the local park for evangelism. Families, children and older people have all shown interest in this activity.

“Origami ministry is an opening gate for our church to go and share the gospel,” Captain Sejal said. “Every week, our women’s ministry ladies make a variety of origami for children.” Inscribed on the origami is the message: ‘Jesus loves you’ in Japanese. 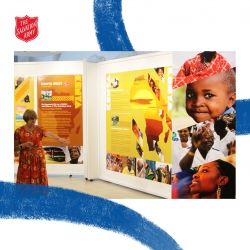 An exhibition at International Headquarters showcases the Army’s work in Africa.

Each week, International Headquarters focuses on and prays for a particular part of the world and the Army’s work there. The spotlight has recently been on Africa.

The Africa Zone is one of the fastest growing within The Salvation Army. As of August 2021, more than 46 per cent of Salvation Army members are senior soldiers. Nearly 300,000 junior soldiers have also been enrolled.

The Salvation Army is permanently registered in 26 countries across the continent but is present in 30 nations. Salvation Army ministry is carried out in:

An exhibition, currently on display at International Headquarters, celebrates the dynamic and responsive ministry to thousands of communities across Africa. 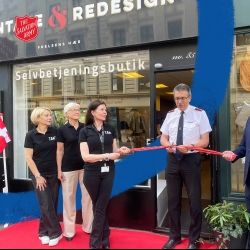 The first Salvos automated shop opened in Copenhagen in June.

The Denmark and Greenland Territory has implemented an innovative solution to the problem of falling volunteer numbers for its recycling program (second-hand shops) – an automated store that can open without any staff present.

Territorial Recycling Manager Gert Pedersen explains: “We were already finding it difficult to recruit enough volunteers, but then the COVID-19 pandemic made things worse. Lots of our older volunteers stopped because of safety and haven’t come back. In the past few years, we had to close four shops because of the lack of volunteers, so we looked at how we could run a shop without needing volunteers to be present from 10am to 5 pm.”

The first automated shop opened in June in the Frederiksberg area of Copenhagen, on the site of the existing recycling shop.

The system at the automated shop is simple. “There is a sign on the shop door with a phone number on it. You send a text message to that number, the door clicks open, and you can enter,” says Gert.

Once in, customers can browse as usual, with cameras recording for security purposes. “The stock is 95 per cent clothing,” says Gert. “You can try things on, and then, when you’ve decided what to buy, you scan a barcode and pay with your card or smartphone.”

The automated shop can open for longer hours – currently 8am to 8pm – and volunteers are only needed to help with restocking.

Two months into the experiment, things are going better than expected. “Sales have actually gone up because of the longer hours of opening,” says Gert, although he suspects that tourists visiting Copenhagen in the summer months may have affected the figures.

That is for the future. Today, the Frederiksberg shop continues to support The Salvation Army’s ministry to Denmark’s most vulnerable people. How it works in the long-term remains to be seen, but, for now, Gert simply says, “We are thrilled.” 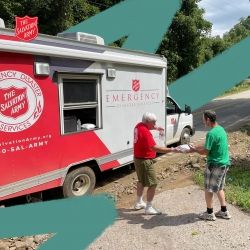 Volunteers assisted those impacted by recent flooding in Kentucky.

Emergency Disaster Services in the USA Southern Territory have been responding to catastrophic floods, landslides and mudslides in eastern Kentucky caused by multiple rounds of severe thunderstorms.

“It’s not just the property loss, it’s the loss of life, and that impacts everybody. The communities in eastern Kentucky are so close-knit,” shared Divisional Commander Major Thomas Louden.

“The loss of one life impacts most likely the entire community. The Salvation Army is trained in spiritual and emotional care, and we will be alongside our people in eastern Kentucky for as long as need be.”

As of 1 August, 20 volunteers/staff and five Salvation Army officers had provided 1623 meals, 225 snacks, 24 hygiene kits and 375 instances of spiritual care.