Women and girls from Haiti came together recently for a women’s camp to glorify God and support each other. Haitian women praised God at the camp, despite their difficult circumstances.

Approximately 60 women, ‘Junior Miss’ members and children participated in the recent women’s camp in Luly, Haiti. The theme for the event was ‘Women overcoming – we are more than conquerors’.

Those participating shared that the camp was an experience of “joy unspeakable” and a wonderful time to forget about their many life stresses and challenges. Sadness was also expressed that more women could not attend due to the difficult conditions the nation is currently facing.

The ladies also thanked Salvation Army leaders for their courage in holding the camp and the glory given to God throughout it. 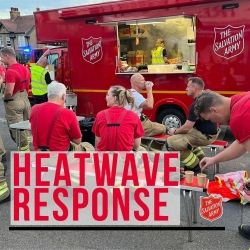 Salvos teams across the United Kingdom helped cater to first responders during the recent heatwave.

As temperatures rose during the recent heatwave in the United Kingdom, Salvation Army teams supported emergency services personnel across the nation as they responded to incidents triggered by the hot weather.

Adrian Clee, Territorial Emergency Response officer, said: “Our Fire and Rescue Services face up to horrendous conditions during hot weather. The support of The Salvation Army enables them to have the chance to relax their tunics, cool down and rehydrate before going on with their vital work. Our teams are always ready to roll their sleeves up and to come alongside the Emergency Services, supporting them and affected communities.”

Nigel Tansley, Emergency Response Coordinator for the North West, said that for over 12 hours, the Incident Support vehicles attended two large fires and an incident involving a potential explosive device. Salvation Army workers also offered spiritual support and refreshments to the team of around 70 personnel working at a woodland wildfire throughout the night.

Volunteers and officers in the South East assisted with distributing water on the Isle of Sheppey in Kent after the island’s water supply was disrupted. 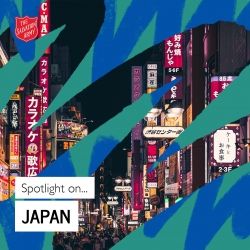 Each week, International Headquarters focuses on and prays for a particular part of the world and the Army’s work there. The spotlight has recently been on the Kenya West Territory and Japan.

The Salvation Army in Kenya has been active for over 100 years, now represented by the Kenya East and Kenya West territories (divided in 2008). Languages spoken in the territory include Kiswahili, English and several regional languages.

Prayer requests for the territory include peaceful elections and leadership transitions this year, the spiritual development of those committed to the mission of The Salvation Army, and that the Kenya West Territory will expand to yet unreached areas as it seeks to share God’s word.

The Salvation Army’s work in Japan began in Yokohama in 1895 when a small group of pioneering Salvation Army officers arrived from Britain. More than 125 years on, Salvationists praise God for all he has done and the work and ministry in the country.

Prayer requests include the continuation of God’s good work through Salvationists, that the territory may be strong in its discipling of all people, particularly as it interacts with children and young people and meets their needs.

Supporting the struggling in Oslo 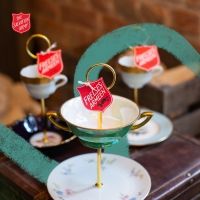 Some of the ornaments made to support social centre residents in Oslo.

The Salvation Army in Jobben Oslo, Norway, makes and sells intricate ornaments and antiques to help support a social centre for those struggling with the impacts of substance abuse.

The team focuses on assisting people who have lost a sense of purpose in their lives through skills training that builds confidence, enhances their professional portfolio, and through rich and diverse opportunities to learn.

The centre participates in local market days and hosts open days, selling their goods. This helps financially support the running of the program and gives The Salvation Army team a presence and connection within the community.

Beautiful pieces making a beautiful impact is a key focus area at the centre! 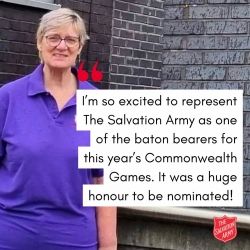 Christine represented the Salvos during the baton relay.

Christine, the Salvos’ Swan Lodge manager, represented Sunderland as one of the Queen’s baton bearers to mark the start of the Birmingham 2022 Commonwealth Games. Christine was one of 14 people selected to represent the North East as part of the baton’s journey through 68 countries over 294 days. The Commonwealth Games run from 28 July to 8 August.

She was nominated as “an extraordinary asset to The Salvation Army” who is “selfless and always goes the extra mile and encourages everyone to be the best version of themselves.”

Christine said: “I’m so excited to represent The Salvation Army as one of the baton bearers for this year’s Commonwealth Games. It was a huge honour to be nominated. I’m still not sure who put me forward!

“I’ll be carrying this on behalf of all the clients and staff from Swan Lodge, who will be there to cheer me on, as well as The Salvation Army. I was worried I might have had to run with it, but I’ve been told I can walk, which is a relief!”

Swan Lodge provides supported accommodation for up to 65 people who are experiencing homelessness.

Extending kindness and compassion in Malaysia 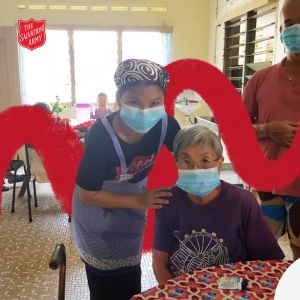 “Caring for the aunties and uncles at our Perak Home for the Aged is no easy task,” shared The Salvation Army Malaysia. “But it is always a joy to see the smile on their faces.”

A critical part of The Salvation Army’s ministry in many parts of the world is reflected in the care given to older people. This global ministry ranges from Salvation Army care homes, like this one in Perak, Malaysia, to weekly programs that combat loneliness, to meal delivery services and support groups. It reflects our commitment to enjoying ‘life in all its fullness’ through faith in Jesus Christ!