You are here: Home › Global Focus › Officer Stands Tall For Christ In Norway 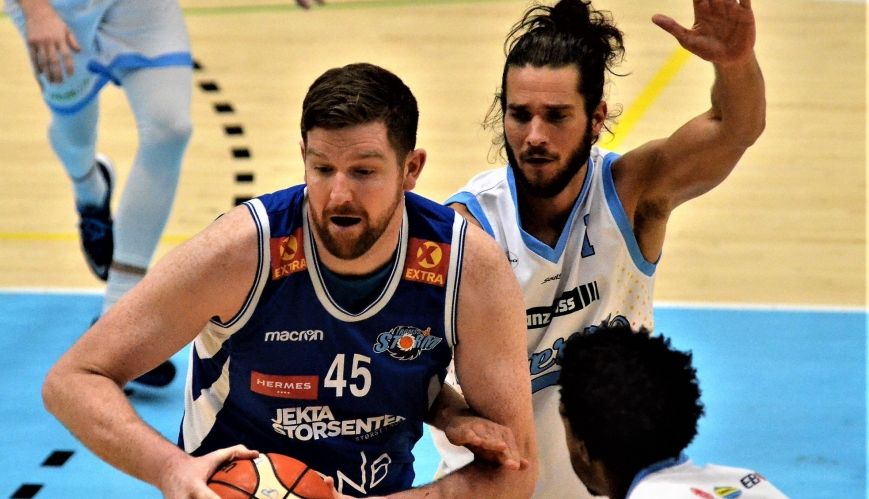 Corps Officer Stephen Mayes, based in Norway, uses basketball "to step out into the world to meet people where they are at".

Captain Stephen Mayes is known in the Norwegian city of Tromsø as “The Salvation Army officer who plays basketball”.

Stephen, corps officer in Tromsø with his wife Lieutenant Ida Mayes, plays for the Tromsø Storm in the Norwegian Basketball Premier League (BLNO) and has become quite a celebrity in the town, situated in Norway’s far north. 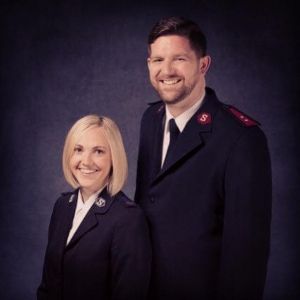 Standing at 213cm, Stephen’s height has opened many doors into the world of basketball over the years, including a college scholarship in his native USA, running a basketball league with four gangs in Harlem (unknowingly at first!) to help lower violence, and building relationships in communities for “Kingdom purposes”.

Stephen and Ida, who comes from Tysvær in southern Norway, have been serving in Tromsø since August 2018.

Stephen shares some of his story, and the impact of basketball in his life and ministry, with Others.

Others magazine: Where, and when, did you complete your Salvation Army officer training?

Stephen Mayes: In the USA Eastern Territory. I entered training in the fall of 2009 and was commissioned in the Ambassadors of Holiness session.

What other appointments have you had?

I have been the corps officer at East Northport, (Long Island, NY), Manhattan Citadel Corps (Harlem, NYC), and at Staten Island Stapleton Corps (Staten Island, NYC). I was also the Territorial Christian Education Director at Territorial Headquarters in the USA East prior to moving to Norway.

It’s obvious really, but what has brought you to Norway?

My wife is Norwegian and we felt it was incredibly important for our life and ministry that we share a mutual knowledge and appreciation for one another’s culture. I also want to be fluent in Norwegian, so living here is the only way to make this happen.

We both sense a call to overseas missions, so we don’t yet know if we will find ourselves in Norway for our entire ministry but, for now, it is the place we needed to be to begin our journey together. My wife completed her officer training in New York prior to our move, so she has also dipped her toes into the culture of my homeland. These experiences are broadening our understanding and appreciation for one another.

How did you get started in basketball? I have played basketball since the age of 12. While I’ve never shared the passion and zeal for the game that many of my teammates have over the years, basketball was a very promising “means to an end” for me. Coming from a poor family (who was served and cared for by The Salvation Army), the prospect of going to college was diminished heavily by the extreme cost. At the age of 12 I was told that due to my height (I was almost two metres tall at the age of 12) I could likely receive a full scholarship to college for playing basketball.

While it was far from a guarantee at that early time, it was a prophetic word of sorts as that is exactly what happened. I was given a full basketball scholarship to Mount Vernon Nazarene University (more than $120,000 value at the time). I played for four years at MVNU and upon the completion of my degree, I assumed my basketball career had likewise been completed. Since then my only basketball playing has been through local games in whatever community I have been living.

When did you start playing basketball in Norway, why, and with which team(s)?

I began playing with the Tromsø Storm here in Norway in September 2018. When I received my appointment in January 2018, I discovered there was a professional basketball team there with a few Americans playing. I hoped to meet the team and to play with them at practice or in other unofficial capacities. However, after playing with them for a couple weeks the coach wanted me to play on the team. He has been incredibly flexible with my work schedule as a corps officer and it has been an incredible fit thus far.

What has been the impact of you playing in this team in terms of ministry?

Thus far I have been quite surprised by how helpful my being on the team has been. In just a few months we have received 6-7 large stories in the local newspapers. On most days I am recognised as “The Salvation Army officer who plays basketball”. It has also been a great way to meet and connect with a number of people around the community such as government leaders, business sponsors and others.

Has your playing had any direct impact on the corps?

The corps folks are tickled to death with this. While it does occasionally take me away from a corps program or two, they are excited to see the connections we are making and the media coverage which is resulting.

What role do you think sport has in connecting with the community and ministry in general? 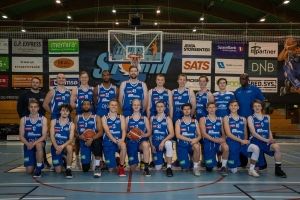 Stephen (centre back) with his team Tromsø Storm.

I think it is an incredible tool for connecting with people. When you live in a “post-church” world, you can’t connect with people in the same ways we used to. We have to step out into the world to meet people where they are at. They are no longer going to come to us.

Also, while I love much of the historical Salvation Army work, such as open airs, many of these approaches are still depending upon a shared understanding of God, sin, forgiveness, heaven and hell. With basketball, I have an opportunity to meet and get to know people in a place where we share common ground. I get to develop relationships and prayerfully consider how I can lead those relationships toward Christ. These are meaningful connections that would not happen without something like basketball.

How has God specifically worked through your basketball ability for the Kingdom?

In my 7-8 years of officership, I find myself continually surprised at how God uses something as simple as the game of basketball. Growing up, basketball was always a means to an end – a college scholarship. I assumed at the completion of that degree, the usefulness of basketball in my life had faded. However, in spite of my lacklustre excitement, I have seen God use this skill set for his Kingdom purposes.

In Harlem I used basketball to lower gang violence through a basketball league I started with four local gangs – although in my naivety I initially didn’t know I was starting a league with four gangs! In my next appointment God used basketball to open a door to a local elementary school. After a couple years of offering free basketball practices once a week, and a free reading program during the summer, the corps just enrolled around 10 new junior soldiers –from that local elementary school.

Neither of those ministries were things I planned or truly, even wanted to do at first. But God had plans. So here in Tromsø I have no idea what he is up to. I have no grand strategy or even grand hopes. But I am excited to see what happens. I’m excited to see how he brings his Kingdom to my new hometown through this simple game of basketball.