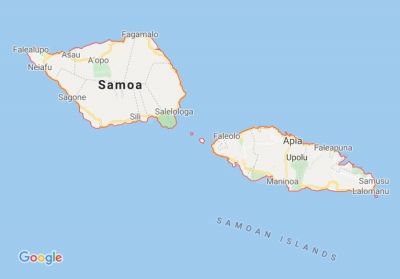 The focus of The Salvation Army’s work is in the capital Apia, located on the smaller island of Samoa.

Two years ago, The Salvation Army was without a presence in the South Pacific island nation of Samoa – no corps, no community ministries, no addiction recovery services – so a team of three officers was sent there to plant the yellow, red and blue flag.

The team consisted of Lieutenant-Colonels Rod and Jenny Carey and Major Miriama Simanu, officers of New Zealand, Fiji, Tonga and Samoa Territory. Their subsequent memorandum to International Headquarters in February this year on the work so far was glowing.

“Looking back since the official opening, there is much to give praise to God for,” the memorandum stated. “Having given birth to the vision and commencement of the ministry, the Lord has been faithful to his promise and poured out his blessing and favour in amazing ways. The work continues to grow and develop with thousands of people being helped, healed and made whole through the threefold mission of caring, transforming and reforming through God’s power.”

Rod said all this had been achieved despite the country having faced two state of emergencies – a measles epidemic and the COVID-19 pandemic. 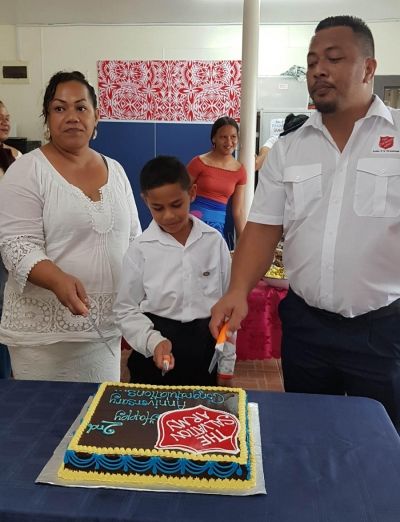 During the service to celebrate the second year of ministry for Apia Corps, which is based in Moto’otua in the Samoan capital, 15 people were enrolled – Miriama enrolled seven young people as junior soldiers and Rod and Jenny enrolled five people as senior soldiers and three as adherents. More than 110 attended the celebration service.

Rod, whose message focused on Jesus’ parable of the sower, told the congregation, “The seeds of the Gospel have fallen on good soil in Samoa. The Salvation Army’s mission has resulted in a large return on the initial planting team of three.”

Following the service, a fellowship lunch was served, which included the traditional “size two pig” and birthday cake.

Rod said people were enthusiastic about belonging to the Army. He said that about 75 people regularly attended Sunday morning worship services and “first-time seekers and re-dedications” were regular features of the meetings.

Soldiership classes were regularly held – the most recent in July – and more than 30 children were on the Young People’s roll. “Several young people have expressed interest in becoming Salvation Army officers,” Rod said.

There are plans to open an outpost in one of the large districts where an existing Salvation Army family lives. The decision on which district has not yet been made.

Rod said the Samoan government did not provide social services or benefits and there was widespread poverty in the country, so the Army provides welfare services such as food parcels, medical supplies, clothing and help with school fees and uniforms.

“People live communally and share living costs to get by,” he said. “Community ministries clients have started attended the corps and have made decisions to follow Christ.” 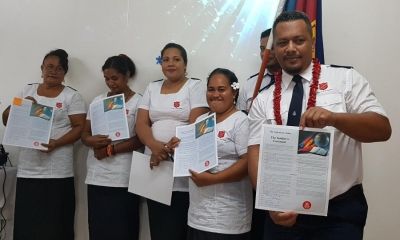 The Army’s addiction services is fully funded by New Zealand’s Ministry of Foreign Affairs and Trade New Zealand with the main substances of addiction being alcohol and marijuana.

Rod said when he first visited Samoa in 2017 to research the potential for launching the Army there, he and Jenny noticed a large stone monument carrying the words: ‘Fa’avae I Le Atua Samoa – Samoa is founded on God’, which is the inscription on the Samoa Coat of Arms.

“It is a constant reminder to every Samoan that God is first and foremost in the nation,” Rod said. “This motto is not only true for Samoa but it is especially true for the Salvation Army.

“From the original revelation and vision to God’s promise of miraculous provision, to the remarkable growth and development of the work, God has been at the heart and soul of all that has been achieved.

“Truly it can be said, ‘Fa’avae I Le Atua Samoa’ – Samoa and The Salvation Army’s work are founded on God.”