You are here: Home › Global Focus › Retirement Lunch Icing On The Cake For Long Serving Barry

Retirement lunch icing on the cake for long-serving Barry Retirement lunch icing on the cake for long-serving Barry

Barry Paul has officially retired as the longest-serving staff member at Papua New Guinea and Solomon Islands Territorial Headquarters, having notched up 34 years of service. 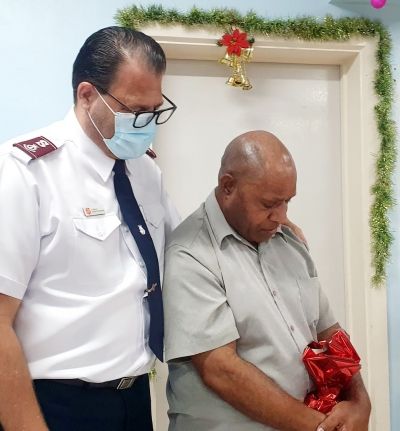 At a special lunch at THQ, Territorial Commander Colonel Garth Niemand said Barry had “contributed so much” in his various roles, which began in 1987 at SalPress [the Army’s printing business] before moving to a position within THQ when SalPress closed in 2001.

Barry’s last role was as Printing and Graphics Supervisor within the Public Relations and Communications Department, which was established earlier this year under Colonel David Bateman, Territorial Secretary for Business Administration.

“He has crossed paths with many officers, national and expatriates, and I know many will speak well of this humble person. His commitment to the work of the Army has been very much appreciated by all,” Serah said.

Barry had been a Media Communications Assistant for 10 years before taking on a new role in the Public Relations and Communications Department, which has five staff.