You are here: Home › Global Focus › Sharing The Love Of Jesus In Unfamiliar Surroundings

Sharing the love of Jesus in unfamiliar surroundings Sharing the love of Jesus in unfamiliar surroundings

Lieut-Colonels Kelvin Pethybridge and Cheralynne Pethybridge () with cadets from the Eastern Europe Territory training college and Regional Officers for Romania, Majors Valeriu and Victoria (with red ).

There are many times when we stop and stand in awe of the many changes that our current appointment has made in our lives.

We never thought we would be living in Chisinau, Moldova, nor did we think we would be between Georgia, Ukraine, Moldova Romania, encouraging and facilitating the work of The Salvation Army in this part of the world.

Eastern Europe just wasn’t part of the world that was on our bucket list to visit as tourists, let alone as a place to call home.

Settling into Chisinau was quite a steep learning curve. Simple things we had taken for granted in Australia were now challenging, to say the least. Living and working in a different culture made us celebrate achieving even things. 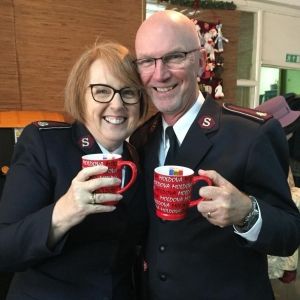 The first time we went to a supermarket to buy food was challenging. We must have caused the locals some concern as we closely examined the pictures on products and used Google to translate the packaging.

The next ‘adventure’ was to be found in taking a trip to the markets to buy some vegetables. This was also a demanding undertaking. It became an exercise of pointing and holding up fingers. Many times we celebrated a simple successful transaction with a high-five – yes, we have five bananas!

The first time I that ice cream came in a tube instead of a tub was an eye-opener to a different world. Driving on the other side of the road in a place where the traffic is chaotic and road rules are more a guideline than a law to be obeyed, and then mixing that with ice and snow, took a reasonable amount of determination.

These revelations continue to challenge our concept of what is acceptable and unacceptable in Aussie eyes due to culture and the lack of resource availability. Corps officers often minister to their community out of what they do not have.

It is a scenario not unlike Peter and John going to the temple to pray. The Western mindset wants to ‘fix’ the issues, but wisdom is continually required to know what is a lack of resource and what is a culturally acceptable way of ministry and life.

Within the there are four main languages, cultures and currencies. This brings its own challenges, as ministry experiences and cultural backgrounds influence the way the Army operates in each of these countries.

Despite the differences, we have been moved and blessed many times by the passion of the officers and soldiers to share the love of Jesus.

There may not be the resources we take for granted in Australia but, in the end, sharing the love of Jesus with another person needing the grace and presence of doesn’t cost money.

It requires a passion for the things of God, a belief in a miracle-working God who ‘can’ and a desire to be Christ in any given situation. This is evident in the Army across Eastern Europe. Resources are scarce, but the passion to serve and care for others is evident and mixed with a deep passion to share the Good News of salvation through Jesus Christ.

The major challenge for us is language. English is spoken in the territorial headquarters building, but even then it is not everyone’s first language, so most people struggle to communicate and be understood.

Once we move outside the headquarters environment, language becomes a major issue in ministry for us. When preaching or speaking, the message needs to be translated, but despite the language challenge, people respond to the offer of God’s grace.

at the mercy seat remains a difficulty, but somehow God hears the heart, which is not impeded by language issues, and ministers to those who truly seek him. 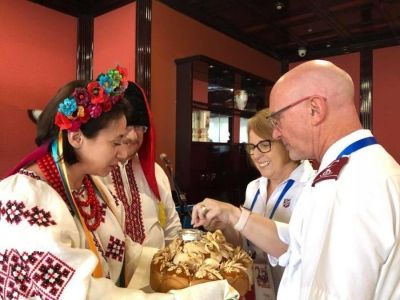 A simple of praying for those seeking God’s presence is a privilege. We have been on quite an adventure over the past few months. When we became officers 36 years ago we vowed to go where and when the Army called us, believing that the God who called us to be officers would direct our path and be our strength and sufficiency.

Over the years, every ‘yes’ to an appointment change has had something to teach us and many times brought a stretching experience. We have had challenging situations in appointments that have forced us to our knees, and we have had times of celebration and joy in ministry, but through it we can testify that God has been our source of strength and the anchor of our lives. He has always provided what is needed in his time.

As we have answered the Army’s latest call, and we find ourselves far away from the familiar and a great distance from our family and friends, we have yet again proved his provision to be true. He truly is ‘Emmanuel – God with us’.

Lieut-Colonels Cheralynne and Kelvin Pethybridge are based at Territorial Headquarters in Chisinau, the capital of Moldova, and have been in their appointments since April 2018. Four countries make up the Eastern European Territory: Georgia, Moldova, Romania Ukraine. The Salvation Army is relatively new here, having opened in Georgia and Ukraine in 1993, Moldova in 1994, and Romania in 1999.