Inaugural competition unmasks a great fundraising idea, pitting Victor E. Hawk, Woody the Trail Blazer and Leo the Lion against each other and three other mascots in a virtual sing-a-thon in Quincy, Illinois.

Victor E. Hawk, RW the Firefighter, Doc the Fox, QBird, Leo the Lion and Woody the Trail Blazer are going head to head in a unique social media fundraiser for The Salvation Army in Quincy, Illinois. 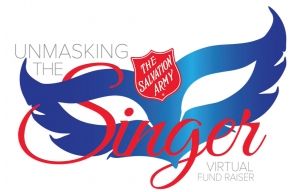 Corps Officer Captain Michael Sjogren said it was all part of an inaugural virtual fundraiser titled Unmasking The Singer where the community was invited to watch a series of nightly video presentations across a week of the masked person singing and, with some clues in the introduction, cast their votes, by making donations.

Michael said the corps was “always seeking fresh ways” in which to connect the message of mission the Army in its community.

He said the virtual fundraiser was the idea of former television news anchor and now the Army’s Corporate and Donor Relations person for the corps’ community centre, Chad Douglas, and a former co-worker and aimed to raise money help unmask “two serious issues in our community” – homelessness and hunger.

“It’s a fun, exciting, entertaining event but it’s going to a very serious cause,” Chad said. “We’re unmasking a problem you may not think exists here – homelessness and hunger.

It is Quincy’s version of the American reality television show The Masked Singer (two seasons of an Australian version of the show have aired) and runs through the Quincy Corps Facebook page.

Six organisations donated their mascots for the competition: Victor E. Hawk, from Quincy University, aims to soar above the others. RW, from the Quincy Fire Department, aims to extinguish the competition. Doc the Fox is a sly competitor from Rooney Elementary School. QBird, from the collegiate summer league baseball team the Quincy Gems, aims to hit its rivals out of the park. Leo the Lion, from Quincy Public Library, hopes he keeps his crown as king of the jungle. John Wood Community College’s Woody the Trail Blazer, hopes the event was a walkover.

The introductions to the six masked celebrities was held on Sunday night 11 April and would be a two-week event. Each night during the first week, the contestants would perform their songs in costume after which the donations from the first week will be tallied and a fan favourite revealed on Thursday 22 April. As part of the second week, the contestants would be unmasked and the public given the opportunity to vote again on the new information. The competition would be announced on Thursday, 29 April.

Matt Schmidt, the Army’s assistant development director for the Quincy/Hannibal area and also a former TV anchor and presenter, said the event had been “months in the making” – “since August, early September,” Chad said: “We could do some sort of ‘in-person’ thing but we wanted to keep it virtual.”

“They actually sing,” Chad said. “This is not a lip-synch. It’s their actual vocals. It’s their dancing. It’s their choreography.”

The money is raised through the voting process. It is $US1 per vote and viewers could vote as many times as they wanted. They need to donate to vote.

“The performances were actually taped back in February so we had time to edit them and make them look polished and [then] add the graphics and [details on] how to vote.”

The contestants were able to perform for up to two minutes. Chad said the entire process had been kept “hush, hush”. Even the contestants’ families were not aware they were part of the event.

He said that on 22 April each of the contestants would be unmasked and they could then make a “last-ditch pitch” to get their friends and family and people to cast a final vote. Once the contestants were revealed, Chad said there would be the “Oh. I know that person. I’ll vote for them” opportunity.

On 29 April, two trophies would be given – one for the fan favourite (who received the most votes) and the other for the contestant who raised the most money.

Chad said the Army in Quincy’s emergency shelter assisted between 350 and 450 clients a year and more with food boxes.

He said the shelter was “full” on most nights of the year and often the surplus are accommodated in hotels and motels in the community “to get them out of the elements”.

“We know that last year was a difficult year [with COVID-19] and we’re seeing a lot of new faces we haven’t seen before,” he said.